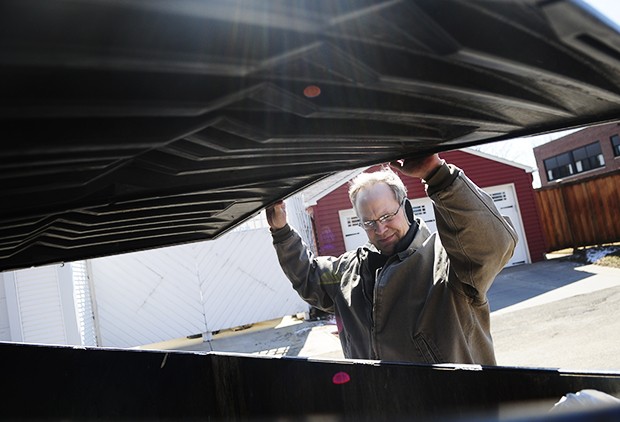 Monday morning, University of St. Thomas first-years Sam Dosch and Patrick Doran led a group of about 50 students down Summit Avenue in St. Paul, where they fanned out and searched through bushes, under decks and inside window wells of yards for fellow first-year Daniel Zamlen, who went missing after he left a party Sunday morning. While St. Paul Police officers, Ramsey County water patrol and a Minnesota State Patrol helicopter searched the Mississippi River bluffs and river bank, a group of at least 550, including St. Thomas students and ZamlenâÄôs friends and family, combed the area around the school Monday. Chris Ismil, a friend of ZamlenâÄôs family, coordinated volunteer searchers Monday at St. Thomas. That afternoon, he instructed a group of about 50 to search slowly and carefully, and keep an ear out for the loud beeping that ZamlenâÄôs insulin pump makes when itâÄôs empty. Zamlen is a type-1 diabetic, and Ismil told the volunteers heâÄôd be out of insulin, and would likely be unconscious if found. Doran was playing video games with Zamlen Saturday night before he went missing. At about 11:45 p.m., Zamlen left for a party. But less than four hours later, just after 3 a.m., a mutual friend called to tell Doran that Zamlen was missing. Zamlen was involved in a disagreement before he left the party, and friends had called him, intending to pick him up, said St. Thomas spokesman Jim Winterer. The friends believed he was walking near the intersection of St. Clair Avenue and Mississippi River Boulevard. But, Winterer said, they heard his voice getting further and further away from the phone, and then it went dead. While some news reports have quoted Zamlen calling out and asking for help before the phone went dead, Peter Panos, St. Paul Police Department spokesman, said investigators have heard âÄúabout three different versionsâÄù of how the conversation ended. Right now, he said, they have no evidence to indicate foul play was involved. After his friends couldnâÄôt find him Sunday morning, they also contacted the St. Paul police, who joined them in searching the area near St. Clair Avenue and Mississippi River Boulevard, Panos said. They did find some footprints in the snow beside Mississippi River Boulevard, but donâÄôt know whether they belonged to Zamlen. After focusing their search south of St. Clair Avenue on Sunday, Panos said, officers looked farther north Monday, in the direction of the University of Minnesota, where Zamlen has friends. A bloodhound dog from Hennepin County also joined the search Monday, and tried for several hours to track ZamlenâÄôs scent, but didnâÄôt lead officers to âÄúanything substantial,âÄù Panos said. Zamlen had been drinking at the party and his father, Dale Zamlen, said his sonâÄôs medical condition amplifies the effects of alcohol. So he might have become disoriented after leaving the party and could have curled up somewhere people havenâÄôt looked yet, Dale Zamlen said. âÄúThatâÄôs what our hope is, thatâÄôs the hope weâÄôre hanging on to,âÄù he said. It was tough for him to sleep Sunday night, he said. He and his wife should have been out in the cold, he said, and his son warm in bed. âÄúItâÄôs hard to let go at night.âÄù Late Monday afternoon, Panos said, the police department was in the process of turning the case over to missing persons investigators, who will decide how long officers should continue searching the area for Zamlen. St. ThomasâÄô volunteer neighborhood canvas ended at about 8 p.m. Monday and yielded no clues, Winterer said. They donâÄôt plan to continue canvassing tomorrow. âÄúThat initial look in every nook and cranny in the neighborhood has been done,âÄù he said. Regardless of how long the officials continue the search, Dale Zamlen said he will keep searching for as long as it takes. âÄúWe got to find him,âÄù he said. Daniel Zamlen, 6 feet, 1 inch and 175 pounds, was last seen wearing a blue fleece jacket and blue jeans. Dale Zamlen is asking area residents to check their garages, cars, and other places his son may have sought shelter in. Anyone with information should call the St. Paul police at 651-291-1111 or St. Thomas at 651-962-5555.