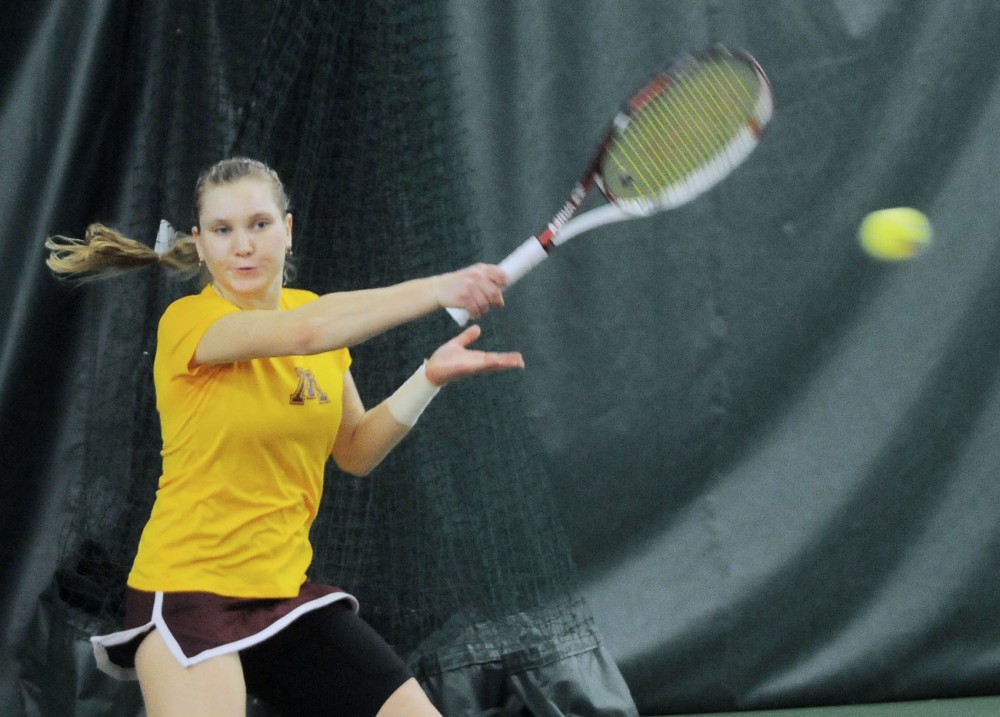 The Minnesota women’s tennis team puts a lot of emphasis on the doubles point.

On Sunday, losing it put the Gophers behind the eight ball from the start, and they never fully recovered.

Minnesota dug itself an early 3-1 deficit and couldn’t dig itself out in a 5-2 loss to No. 70 Marshall on Sunday.

“When you get a team like that at home, you want to get [the victory],” head coach Chuck Merzbacher said. “That’s just the bottom line.”

It was only the second time the Gophers relinquished the doubles point all season.

“It was a high-quality match,” Merzbacher said. “We’ve just got to take some of the pressure off of [Brichacova].”

Merzbacher said the key to creating some breathing room for Brichacova is getting some production at the bottom of the lineup.

A player who’s starting to provide that is junior Aria Lambert.

Lambert defeated Rachael Morales in straight sets at No. 6 singles Sunday. It was her third straight singles victory.

“I really just fought for every single point,” Lambert said. “The more I can win, the more confident I can get.”

Is Lambert starting to get on a roll?

And so do the Gophers.

“We played pretty well from the first point to the last point in dominating fashion,” Merzbacher said of the Iowa State sweep.

The Gophers men’s team had dropped three straight matches with a 4-3 result.

So when sophomore Ruben Weber clinched his No. 2 singles match in the third set to secure a 4-3 win over No. 45 Drake on Saturday night, the No. 49 Gophers broke out in celebration.

Head coach Geoff Young said the team tries to stay level regardless of results, but the team seemed to breathe a collective sigh of relief after the victory.

“It was really nice to see Ruben get that,” Young said. “I’m really happy for him. I think it’s easier for him now, perhaps, to believe.”

Gophers junior Leandro Toledo fell to Alen Salibasic at No. 1 singles in the match against Drake. But the Gophers, who took the doubles point to start the match, were able to recover.

Minnesota was anchored by junior Jack Hamburg, who won at No. 3 singles. It was his sixth straight singles win.

The Gophers take the court against border rival Wisconsin at home Saturday in search of their first conference win of the season.