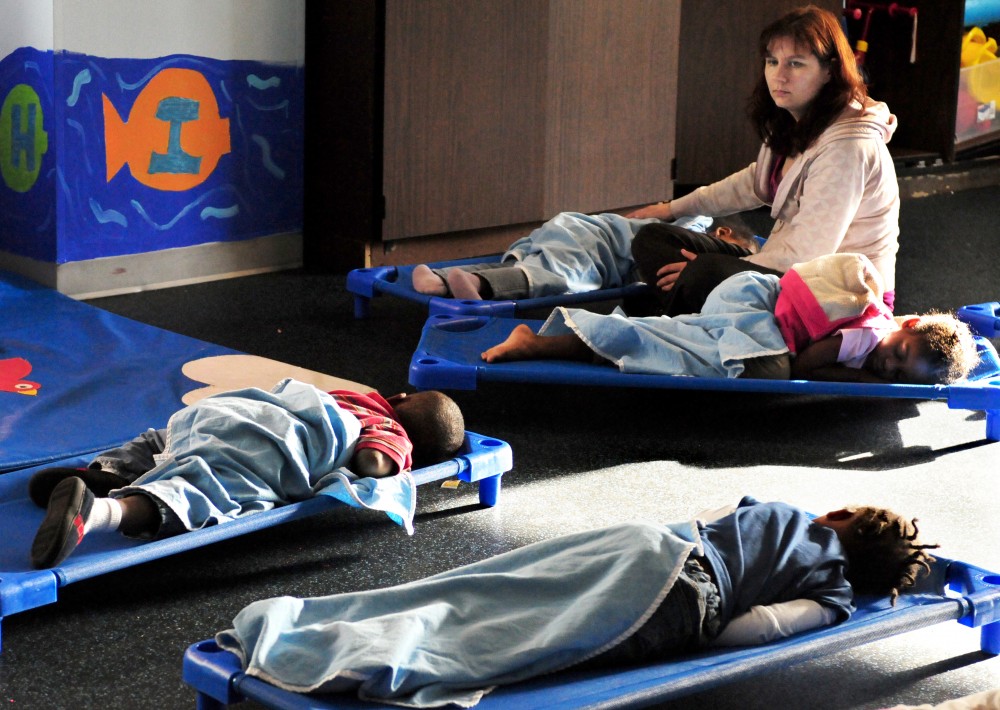 For Steve Walker, 49 , and his wife and three children, their home isnâÄôt technically a home at all, rather its People Serving People, an emergency homeless shelter in downtown Minneapolis . The family has been living in the shelter off and on since 2003. âÄúItâÄôs one of the hardest things we have to do,âÄù Walker said, talking about his children. âÄúThey hate moving all the time, and are embarrassed to be picked up by the bus in front of the shelterâÄ¦But I have to go where the work goes.âÄù For Walker, and about 3,000 other homeless people in Hennepin County, jobs are not easy to find with the current economic downturn, and more and more families are finding themselves at shelters like PSP. This week is homelessness awareness week, but Cathy ten Broeke, coordinator of the Office to End Homelessness in Minneapolis and Hennepin County, said a lot of people arenâÄôt aware that many of the homeless in Hennepin County and the country are children and families. âÄúI think when people think about the homeless, they typically think of the man standing on the corner with a sign,âÄù Broeke said. âÄúWe see homelessness affect everyone.âÄù The city of Minneapolis and Hennepin County recently passed a plan to end homelessness in the area by the year 2016. This 10-year-plan to end homelessness, also known as Heading Home Hennepin, was developed by members of the community who have experienced homelessness . Broeke said the number of single homeless adults has not changed much in the last few years, but she has seen the number of homeless families and children increase because of the economic downturn and bad housing market. According to the National Coalition for the Homeless, the rate of requests for emergency assistance for homeless families rose faster than the rate for any other group between 2006 and 2007. Of 23 cities surveyed, each expected an increase in the number of families with children seeking assistance in 2008. However, 32 percent of homeless families with children were turned away in 2005 due to lack of resources. âÄúFor the families that were renting, the landlords are being foreclosed on,âÄù Broeke said. âÄúSo even though they are paying their rent and doing everything right, they are the ones that end up with no place to go.âÄù The families that have been kicked out of the housing market are now flooding the rental market, Broeke said. âÄúIt makes it really difficult for families to find a place,âÄù she said. According to the most recent statewide count by Wilder Research in October 2006, on any given night in Minnesota, there are about 9,200 people experiencing homelessness, about half of them are under the age of 21. Of PSPâÄôs 330 guests each night, half are children under the age of 12, and the average age of guests is seven years old. âÄúItâÄôs really about the kids,âÄù Marcie Wagner Wolterstorff, director of development and leadership giving at PSP said . âÄúThe fact is that itâÄôs children who are homeless, and if we donâÄôt help, guess what, they are going to grow up and still be homeless.âÄù According to the Center for Urban and Regional Affairs (CURA), the proportion of the total sheltered homeless population in Minnesota who were children has risen sharply in the last two decades, increasing from 23 percent in 1985 to 39 percent this year. JJ Cutuli is a graduate student studying child development and the lead student investigator in a study of homeless children through CURA. Cutuli said in Minneapolis schools, children who do not have a stable residence tend to underperform those that do. âÄúPeople are surprised that there are homeless families in Minnesota,âÄù he said. âÄúThere seems to be a lot more families in the shelters now than there was when I first started this study in 2005.âÄù Cutuli not only collects data at shelters in Minneapolis, but volunteers regularly. He said itâÄôs important that people understand how different homeless families can be, and that this problem is not new. âÄúThis is not just a problem of the housing crisis,âÄù Cutuli said. âÄúThere are a lot of families who are homeless for a lot of different reasons, and they need help.âÄù