U area lags with recycling

In a city-wide effort to get residents to properly recycle, the University is a trouble spot. 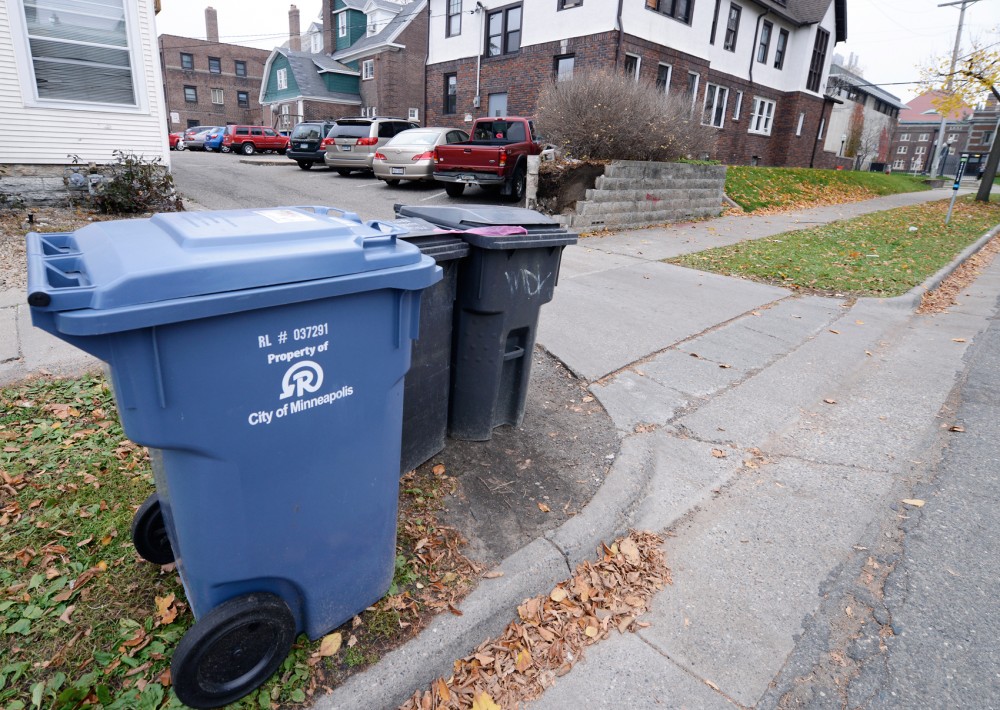 A City of Minneapolis recycling bin sits on 16th Ave. SE in front of the Delta Chi Fraternity on Wednesday afternoon.

Olivia Johnson
Despite city efforts to get residents to recycle properly, bins around campus are still filled with things like plastic bags, shrink wrap and bread bags.
As Minneapolis continues to push its citizens to follow rules for recycling plastics, the University of Minnesota area has been a consistent problem for the city’s waste management team.
Educational handouts have gotten most areas of the city to keep items such as Styrofoam, coffee cups and paper ice cream tubs out of their recycling bins, said Kellie Kish, recycling coordinator for the city of Minneapolis.
But renters, Kish said, may not care as much about recycling as homeowners do and tend to throw garbage in recycling bins.
“It’s much more difficult for the city to educate students on this issue than it is to educate homeowners,” Kish said.
“Students living in rental housing more frequently place inappropriate materials into the recycling carts.”
The only place that can recycle plastic films, like bags, on campus is an area on the first floor of Coffman Union, said Dana Donatucci, the University’s recycling supervisor.
Anywhere else, plastic bags can interrupt the recycling process.
“They get wrapped around the equipment, then they have to shut down the equipment and clean it,” said Julie Ketchum, Minnesota government affairs manager for Waste
Management. “We spend 20 minutes a day, three times a day cutting plastic bags off of our equipment so they can function better.”
In August, the Minneapolis City Council proposed a ban on plastic bags, partly to reduce their impact on the city’s recycling system.
Greek recycling to change
A Minnesota law going into effect in January requires all commercial buildings recycle at least three materials, like paper or glass, if they have a contract for four cubic yards or more of waste a week, Donatucci said.
The law will affect fraternities and sororities.
Only half of all greek houses at the University currently recycle, said Chari Porter, manager of the Fraternity Purchasing Association.
Recycling can be a difficult process for greek houses because the recycling can be contaminated by garbage or other materials left by pedestrians walking by a fraternity or sorority house.
“Sometimes it’s hard —  anyone can walk through campus, dump stuff in [their bins],” Porter said.
In December last year, graduate assistant in the Office for Fraternity and Sorority Life Megan Heineman attempted to figure out a way for all the greek houses to integrate their recycling.
“There was interest in the past, but it had never taken off,” Heineman said. “It’s complicated to introduce a new program in.”
Although an integrated recycling process would have increased recycling in the houses, it’s all about pricing and bidding for the organizations.
“At this point, I would have pushed it a little more, but it’s nice that this law has been passed,” Heineman said.
Delete Image
Align Left
Align Center
Align Right
Align Left
Align Center
Delete Heading