The area’s neighborhood association has asked the state for a new pedestrian bridge to better accommodate an increasing number of cyclists. 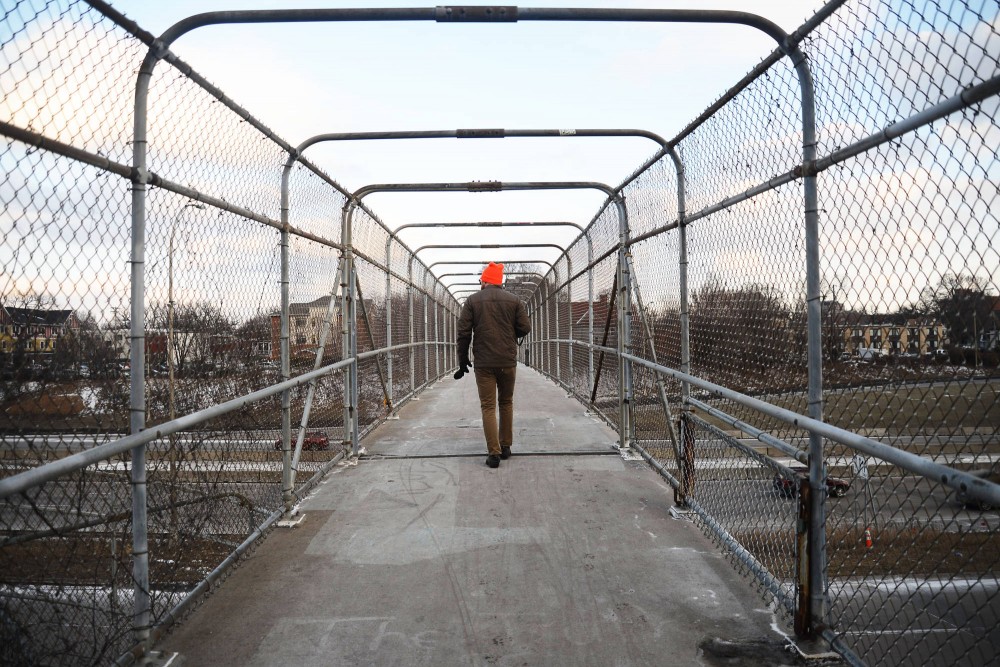 Taking the pedestrian bridge that runs over I-35W to and from class every day can make Tyler Birschbach nervous.

So nervous, the psychology senior said, that he sometimes gets off his bike and walks it down the narrow bridge’s winding ramp for fear of hitting someone.

To help pedestrians and bikers like Birschbach more easily cross the interstate at Fifth Avenue Southeast, the Marcy-Holmes Neighborhood Association is asking the Minnesota Department of Transportation  to build a wider bridge.

The group sent a letter to MnDOT’s transportation commissioner, Charles Zelle, on Thursday requesting that the department upgrade from a current plan to repair the Fifth Street pedestrian bridge and instead replace it entirely.

The 9.5-foot-wide bridge hasn’t seen any repairs since its construction in 1972.

MHNA President Jan Morse said the bridge worked for the community when it was used exclusively for walking, but increased bike use in recent years calls for a wider bridge.

“We’re definitely looking for anything to improve it, but we think this would be a missed opportunity to limit it to only resurfacing,” said Marcy-Holmes’ Communications Director Chris Lautenschlager. “We’re strongly advocating for an entirely new bridge.”

Lautenschlager said the bridge isn’t wide enough to accommodate multiple bikers and pedestrians at once.

The department will redo the bridge’s surface to maintain a safe surface for bicycles and pedestrians while also preventing pieces of concrete from falling onto the interstate, Carpenter said.

“Public safety is a major concern when discussing repair projects,” Carpenter said, “and the support structure of the bridge is in good shape, especially for its age.”

MnDOT officials haven’t determined how to replace the cage-like fencing around the bridge yet, he said, but they plan to make the improvements by 2018.

The neighborhood association opposed the construction of four sound walls along I-35W in 2013, saving the state about $3 million.

Members say the money saved by voting that project down should justify a new pedestrian bridge for the area.

“We as a neighborhood organization have been successful at rolling up our sleeves and getting work done,” Lautenschlager said.

He said he hopes the neighborhood association is getting involved early enough in the planning process to change the department’s plans.

“If we’re going to encourage bicycle and pedestrian mentality, then we have to give people safe and convenient routes through the neighborhood,” he said.