Esten will be charged with setting the UMAA’s course for the next three to five years. 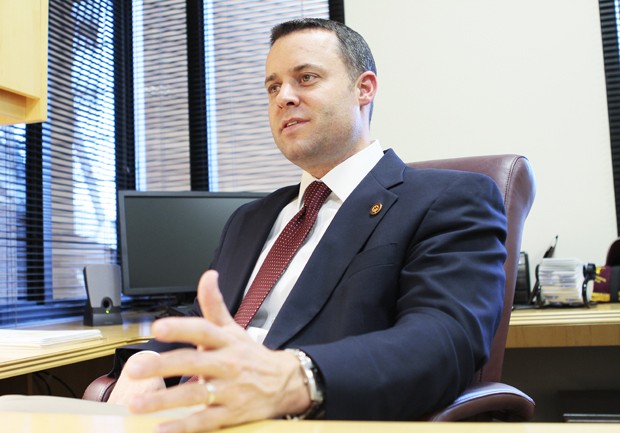 CEO of the Alumni Association Phil Esten works at his office Wednesday at McNamara Alumni Center.

The University of Minnesota Alumni Association will welcome âÄúCBS Evening NewsâÄù anchorwoman Katie Couric to Mariucci Arena as keynote speaker Saturday at its Alumni Association Annual Celebration. Although this will be the 106th annual celebration the UMAA has hosted, it will be the first under new CEO Phil EstenâÄôs leadership. Esten took the helm for the UMAA March 15 after Margaret Sughrue Carlson resigned after 25 years at the post. Esten steps in at an exciting time for the UMAA. As CarlsonâÄôs last five year plan for the organization is in its twilight, Esten will be charged with setting the UMAAâÄôs course for the next three to five years. âÄúYouâÄôve probably heard the expression before [about] drinking from the fire hose,âÄù Esten said. âÄúRight now, IâÄôm looking for the spigot so I can turn it down a little bit.âÄù Prior to setting the UMAAâÄôs goals for the next half decade, the La Crosse, Wis., native said he must do one simple thing: listen. Esten will spend the upcoming months with his ears open and his finger on the pulse of how students, University leadership, alumni and a host of other groups want to be engaged by the UMAA. âÄúThe day you get admitted to the University of Minnesota is when we have to start engaging with you,âÄù Esten said. Engagement is a word that comes up frequently when talking with Esten or when others talk about him. This is an appropriate word, considering that a major function of the UMAA is to facilitate the engagement of alumni and students at the University. The UMAA provides a âÄúconcierge of servicesâÄù including facilitating mentorship opportunities for current students and involving alumni in advocacy efforts on behalf of University interests at the state Capitol. Most recently, the UMAA worked with its 60,000 members to communicate the UniversityâÄôs interests in the Central Corridor Light Rail Transit project to the Legislature. âÄúWe can really act as a voice in supporting the University and advancing the UniversityâÄôs mission,âÄù Esten said. Bruce Mooty, the UMAAâÄôs former president of the National Board of Directors and co-chair of the search committee that hired Esten, said that he was optimistic that Esten would be able to connect with recent graduates, something the UMAA has had difficulty with in the past. âÄúThere were a lot of things about him that we were very excited about, and so far, in the albeit brief time that heâÄôs been the CEO,âÄù Mooty said, âÄúI think people have been very enthusiastic about what heâÄôs doing and the job that heâÄôs going to do in the long term.âÄù Esten, 37, has worn a variety of hats since his arrival at the University in the summer of 2001. During his nearly 10 years at the University, Esten has been a kinesiology doctoral student, an adjunct professor and associate athletics director. As an associate athletics director, Esten was the point person in the construction of TCF Bank Stadium. âÄúHe deserves a lot of credit for the venue that you see,âÄù Athletics Director Joel Maturi said. âÄúI think because of his talents and because of who he is âÄ¦ I just relied on him an awful lot.âÄù Maturi said that although he had to make the final decision on construction issues, in most instances he relied on EstenâÄôs expertise and judgment. Prior to coming to the University, Esten worked in Ohio State UniversityâÄôs athletics department, where the former high school football coach was doing his graduate work in sports management. As an assistant director of ticketing and events, Esten was involved in facility building and renovation projects, which he said helped prepare him for overseeing the construction of TCF Bank Stadium. Esten describes the five and a half years he spent working on TCF Bank Stadium âÄúa labor of loveâÄù and admitted to getting a little emotional seeing the energy on campus on opening day. âÄúBuilding a football stadium on campus was less about the bricks and mortar and more about what we knew it would create in memories,âÄù Esten said. Despite the demands of his new position with the UMAA, Esten continues to teach a graduate-level course in sports management. Mary Jo Kane, EstenâÄôs former Ph.D. adviser and current professor and director of the UniversityâÄôs School of Kinesiology, said that Esten is one of the departmentâÄôs âÄúmost popular and well-respected instructors.âÄù Kane said that Esten is the type of person who takes the initiative and routinely exceeds expectations. âÄúMy attitude with Phil was always, give him a job or give him a task and get out of the way,âÄù Kane said. As Esten enters his new role as the architect of the UMAAâÄôs future strategic plan, he said he will benefit from the variety of relationships and connections he has forged at the University during the past 10 years. âÄúThere are a lot of different groups that have to come together to help inform what our vision is,âÄù Esten said. âÄúItâÄôs not my vision. ItâÄôs our vision.âÄù