‘He is University of Minnesota recycling’: U employee seeks campus sustainability

Known to many as "the Recycling Guy," Dana Donatucci hopes the University will one day be a zero-waste institution. 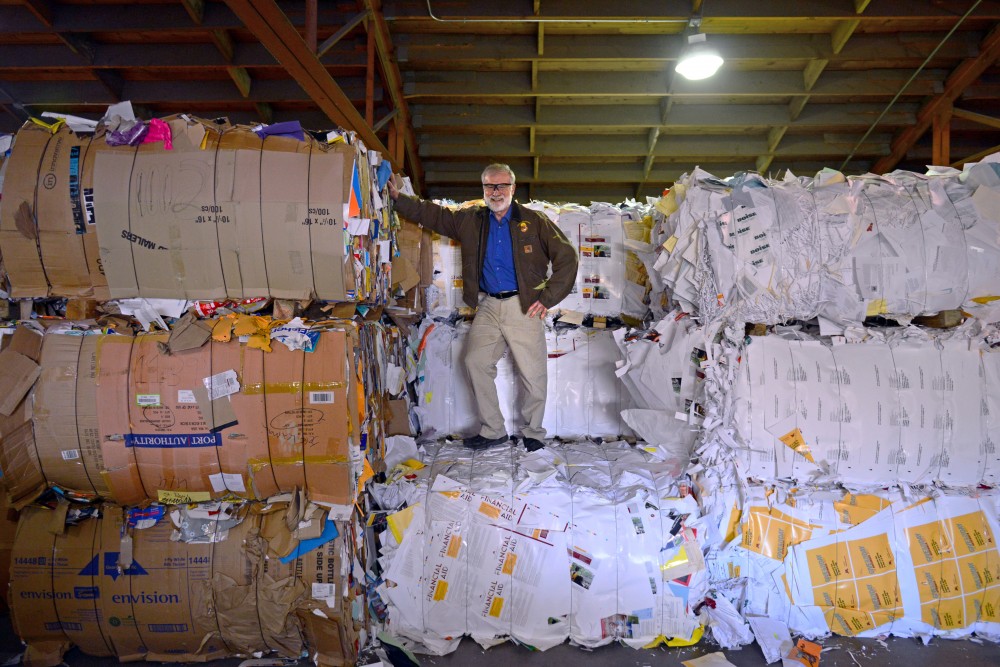 Facilities Support Supervisor Dana Donatucci, known to many as "The Recycling Guy," poses for a portrait among bales of recycled materials on Tuesday, Nov. 7 in Minneapolis. Donatucci has been in charge of all things recycling at the University for 30 years.

While walking around campus, University of Minnesota Recycling Supervisor Dana Donatucci regularly stops by one of the many waste bins that litter the area. Distracted by stray bottles, Donatucci will dig through trash cans to hand-sort misplaced recyclables.

At home, Donatucci’s family recycles or reuses almost all waste materials. They accumulate about one bag of trash a year.

“He is not afraid to get his hands dirty,” said John McKeown, one of Donatucci’s employees.

Donatucci is taking this hands-on approach in his quest to make the University a zero-waste campus. This semester, he is seeking faculty support for a resolution backing the creation of central collection and organics programs on campus. He hopes to present the document to the University Senate this spring. Donatucci — known to many as “the Recycling Guy” — pursued these programs since he was hired at the University nearly 30 years ago. Since then, roadblocks derailed the efforts.

Now, he’s optimistic that increased public awareness of sustainability will make this attempt a success.

“The times have never been more favorable,” Donatucci said.

“He is leading this whole thing,” said Nicole Smiley, a Social Concerns Committee member. “He’s kind of a one-man show.” He has also partnered with the Minnesota Student Association to bring organics — a system for disposing of compostable waste — to residence halls.

In spring 2017, they installed a pilot organics program in Yudof Hall and hope to expand to two more residential halls this year.

“Dana has been integral to the work that has been done with recycling at the University,” said Will Macheel, head of MSA’s sustainability committee. “He is one of my favorite administrators to work with just because of the enthusiasm he brings.”

Over the years, Donatucci has developed a reputation as an energetic proponent of recycling and campus sustainability.

“He is an innovator… always looking for new ways to increase efficiency,” McKeown said.

Donatucci, who holds a Ph.D. in biochemistry, is responsible for creating and implementing some of the most visible aspects of the University’s present-day waste disposal program as part of his long-term goal to make campus zero-waste. His designs include waste bin lids with slots for recyclables like newspapers or bottles, and the quad system, which sorts recycling into separate containers for different materials.

“He is University of Minnesota recycling,” said John Sundsmo, waste recovery service manager and Donatucci’s supervisor. “He has tenacity. He has stuck with [University recycling] this entire time.”

Donatucci first tried to implement centralized collection at the University in the 1990s.

“I was told that [Facilities Management] was unable to support the program. If I wanted to do it, I had to do it on my own,” said Donatucci. “So I did.”

He successfully installed receptacles in 63 buildings before the program was shut down due to conflict over the centralized collection process, which some faculty found inconvenient.

Donatucci then turned his attention to implementing an organics program, which stalled due to lack of interest and funding.

“We would’ve been on the forefront — one of the first campuses to do this,” Smiley said.

Despite the various setbacks over the years, Donatucci remains optimistic that the University will one day be a zero-waste institution.