Tapingo fails to gain momentum at U

Tapingo makes mealtimes easier for students but not employees. 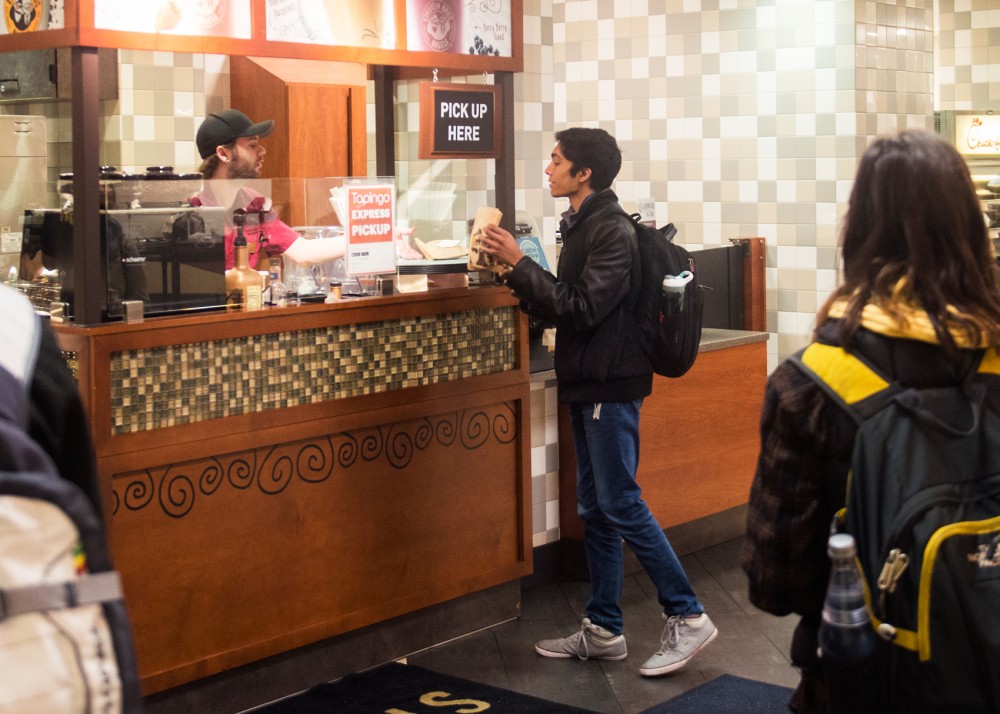 Freshman Vishnu Arun picks up his Tapingo order at Einstein Bros. Bagels in Coffman Memorial Union's Minnesota Marketplace on Wednesday morning. Arun has been using Tapingo for a month and said that he finds the app useful.

Annalise Gall
A new app at the University of Minnesota is bringing a different meaning to “dine and dash.”
Tapingo — a food-ordering service offered by University Dining Services as of this semester — helps students skip long lines and avoid wait times at 14 different locations around campus, like Starbucks and Freshii. The app, which debuted in 2012, has been adopted by other colleges throughout the country.
Still, the app has yet to gain momentum on campus. As of now, 2,000 students have downloaded the app at the University, said Leanne Reis, Tapingo’s public relations manager.
Users connect their credit or debit card to the app, and University students have the option of paying with FlexDine or Gopher GOLD.
First-year Monica Bruno said she believes a potential factor is that students might not want to lose face-to-face contact with servers.
Bruno said she doesn’t use Tapingo because relying on an app could actually complicate the ordering process.
“I’d rather just talk to the person to get my order,” she said.
Starbucks barista and University student Jen Schmit said special requests and technical difficulties can stress employees.
“When we have a line out the door and there is a Tapingo order popping up in the middle, it makes it more difficult to keep the line flowing,” she said.
Many customers place orders five to 10 minutes ahead of time, Starbucks student manager Alice Xie said.
Though Tapingo includes a feature where employees can respond to orders, she said, preordering can be difficult in certain situations, like when an ingredient is missing or out of stock. Technical malfunctions in registers can also create blips in service that keeps the business from processing orders, she said.
“People who ordered come in and are like, ‘Where is my drink?’” she said.
Despite occasional kinks, some employees say Tapingo’s efficiency ultimately outweighs the early bugs University restaurants have encountered.
Doshanley Nickerson, cashier at Freshii, said she prefers fulfilling Tapingo orders over in-person orders because they’re more direct.
“I like that they know exactly what they want,” she said.
Nickerson also said that it’s a good system for faculty and campus visitors as well. Since Freshii is located in the Phillips-Wangensteen building, Nickerson said she sees doctors and patients use Tapingo regularly.
The cashier personally uses Tapingo at campus restaurants including Erbert and Gerbert’s Bistro so she can maximize eating time during short breaks.
“I’m on my 30-minute lunch break, so I just put [my order] in and get over there,” she said.
Delete Image
Align Left
Align Center
Align Right
Align Left
Align Center
Delete Heading