U program turns youth into CEOs

Sixty percent of youth participants go on to higher education. 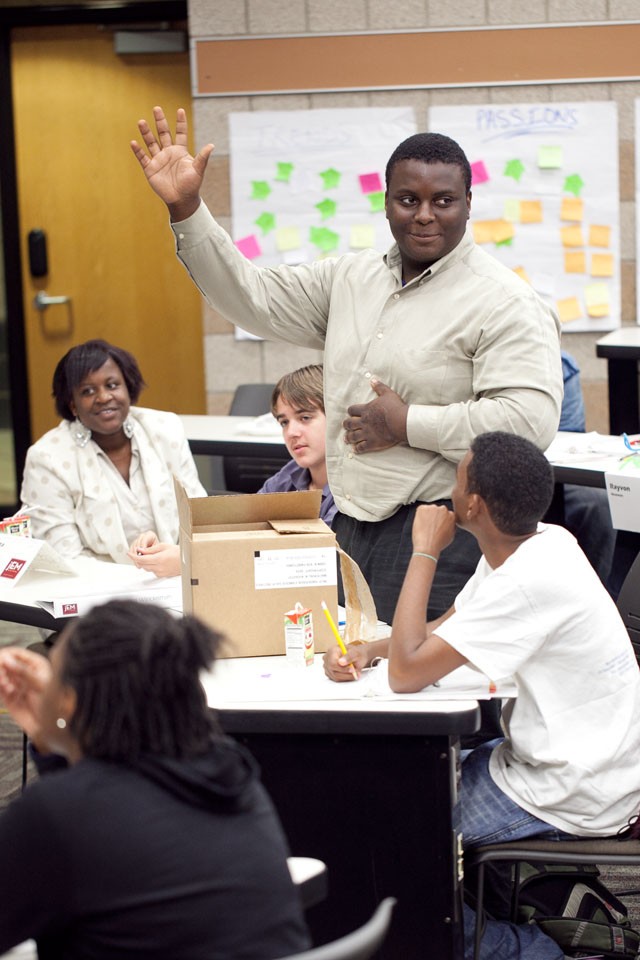 Immanuel Jones shares his dream for an agricultural business with the entrepreneurship camp in the Carlson School of Management Tuesday morning. The five week camp is funded by local small business owners to help under-represented students like Jones learn about running a business.

Last summer, Immanuel Jones walked through the doors of the University of Minnesota Carlson School of Management as a shy 16-year-old struggling at Wayzata High School.

This summer, he entered those same doors as a small business owner and CEO.

The Wayzata, Minn., senior markets his own small-scale farm and community garden called EcoCity, which he founded last summer.

Though becoming a businessman was something he said he always dreamed and prayed about, he attributes his success to the Junior Entrepreneurs of Minnesota summer program he participated in last year.

âÄúThe people around you determine who you are and who you become,âÄù he said, fiddling with his first batch of business cards. âÄúI found real people at JEM: mentors.âÄù

From June 13 to July 14, Jones will work as an adviser for this yearâÄôs JEM camp, where he is helping 23 area high school students learn the principles of entrepreneurship through the program held at the Carlson School.

âÄúWeâÄôve created a camp that uses the spirit of entrepreneurship to provide access to higher education for these students,âÄù said Selemon Asfaw, the director Youth Entrepreneurship and Leadership Programs for the UniversityâÄôs Office for Business and Community Economic Development.

When Charlen Nyangaresi saw an advertisement for the program during a break between classes, the University Post-Secondary Enrollment Options student immediately went online to apply.

She wants to use the camp as a springboard to develop business ideas and skills that will help her create jobs by starting a business in her native country of Kenya.

âÄúThis camp is teaching me that no idea âÄî no matter how big or small âÄî is stupid,âÄù she said. âÄúAnything is possible.âÄù

Students who apply are admitted based on their interest in entrepreneurship, business or community activism rather than their GPA.

Though grades are not the primary focus of the program, JEM stresses the importance of moving on to higher education, Asfaw said.

Before he attended the camp, Jones said he struggled in school and lacked the motivation to do well.

In addition to acting as CEO of EcoCity, he is focusing on doing well on the ACT âÄî he hopes to score a 31 to make up for his less-than-stellar GPA and gain admission to Carlson School, his No. 1 college choice.

Asfaw said 60 percent of JEM participants have gone on to higher education and 35 percent have been accepted to the University.

âÄúWe would love to have them all at the [University],âÄù Asfaw said. âÄúBut realistically not all of them are going to get in. We just want them looking to the future.âÄù

The program is entirely supported by small businesses, most of which are owned or founded by women or minorities in the community.

Asfaw said he hopes sponsors continue their support because cuts at the University put community programs like JEM in jeopardy. Students receive two meals per day and a 31-day unlimited bus pass for transportation.

In addition to developing, refining and pitching their own business ventures, students spend each Friday of the program at St. Olaf Community Campus in north Minneapolis where they are building a small farm that will act as a food hub for low-income families in the area.

After the program, students interested in continuing their businesses are given access to necessary resources through the UniversityâÄôs Youth Entrepreneurship and Leadership Programs.

Those resources have led to successful projects like JonesâÄô EcoCity and the North Community High School Spirit Store.

JEM started in 2009 after a similar institute was discontinued in 2007. JEM hosts lectures from some of MinnesotaâÄôs most famous businesspeople including the inventor of the artificial heart, the founder of the Geek Squad and Dave Anderson, who founded Famous DaveâÄôs BBQ restaurants.

âÄúThe speakers keep in contact with us,âÄù Jones said. âÄúThey really inspire us and care if we succeed.âÄù

The Rev. Steve Lomen, executive developer of partnerships, programs and funding for St. Olaf Community Campus, said his partnership with the students is inspiring.

âÄúThe program really opens up doors for a lot of folks in Minneapolis,âÄù Lomen said. âÄúTheyâÄôre really starting up a future for small business owners.âÄù