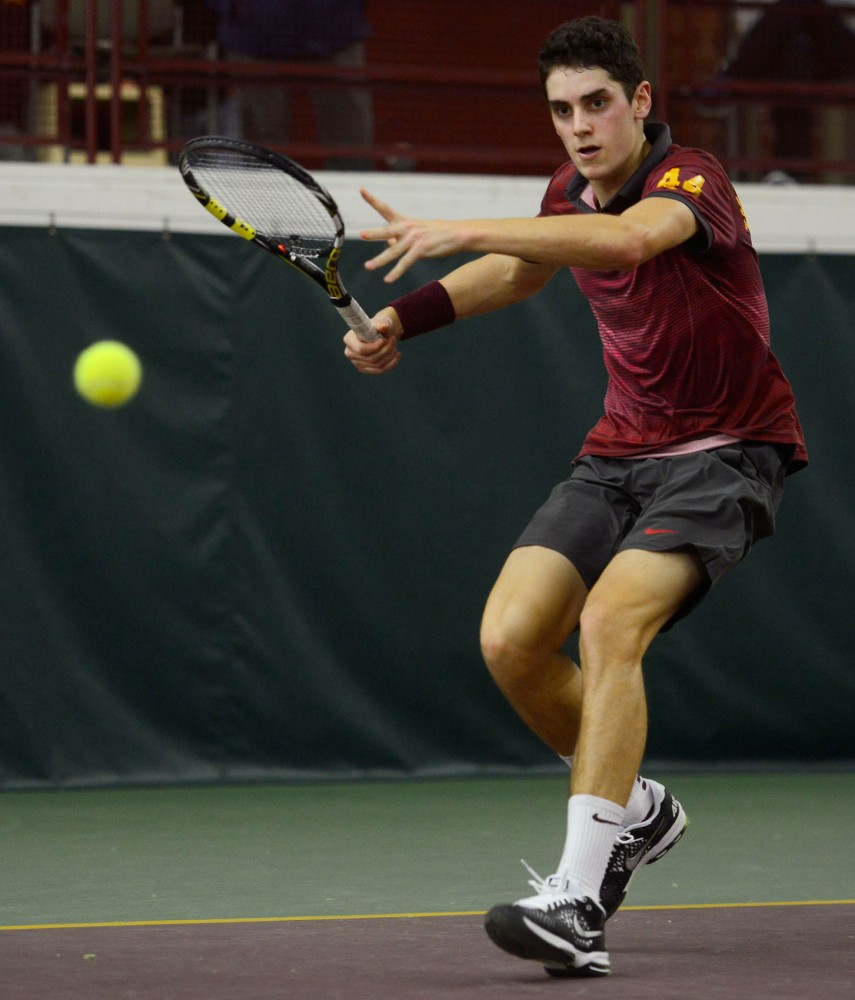 Freshman Felix Corwin volleys the ball at the Baseline Tennis Center on Friday against Washington.

A crowd gathered around Court 1 at the Baseline Tennis Center on Sunday to watch what would be the deciding match between Minnesota and Drake, who were deadlocked 3-3.

“Everyone in the building was nervous,” head coach Geoff Young said.

For the second time in three days, the Gophers needed freshman Felix Corwin to step up and win them the match.

Once again, he delivered.

Corwin’s two singles victories corralled No. 34 Minnesota a 4-2 victory over No. 54 Washington on Friday and a 4-3 victory over the No. 24 Bulldogs Sunday afternoon.

“Obviously it’s not always going to be like that where I’m one of the last matches,” Corwin said. “I would love to be winning in straight sets, instead, and be one of the first ones off. But I’ve got to embrace it and just kind of live it up because this is what we do it for — moments like that.”

The Gophers got off to a solid start against Drake, earning the doubles point and winning the first singles point.

“That was huge,” Corwin said. “Because we won so close, we needed the doubles point.”

The Bulldogs battled back late in the competition, though, ultimately capturing two singles victories to tie the score 3-3.

Then, all eyes fell on the freshman.

“I was expecting to be nervous,” Corwin said. “I kind of surprised myself right when the other matches finished and it came down to my match, my nerves didn’t rise at all. I actually stepped up my game, and it was really good.”

The match against Washington proved to be less dramatic.

Minnesota captured two quick points to open the match against the Huskies.

“We came out big in doubles,” senior Leandro Toledo said. “We won [the] doubles point, which is always a game-changer.”

Washington followed by capturing the No. 2 and No. 3 singles matches, knotting up the score at 2-2.

Freshman Matic Spec and Corwin both bested their opponents, allowing Minnesota to keep its home record unblemished. The two freshmen are tied for a team-best 20 singles victories.

Young said he’s not surprised by the young players’ successes.

“They’re very good and beyond their years with how they compete and how they play,” Young said. “I expect big things in the future for them.”

The freshmen both obtained victories on Sunday, helping the Gophers topple Drake.

“They are a big support for the team and a big lift,” Toledo said. “They make us better, and it’s good to see for the future, too, that we have two strong freshmen who can develop into leaders really fast. It’s good to see that even if I’m leaving, the program is in good hands with those two.”

Corwin’s veins pumped nothing but ice-cold blood through his body this weekend.

While it might have been the poise under pressure that allowed Corwin to thrive, Toledo said it’s the freshman’s approach that’s allowed him so much success.

“He adapted really fast coming into college,” Toledo said. “At first he was a more defensive player, now he’s going to be an offensive player. Today, in the third set, that was the game-changer that made the difference. He was the more aggressive player, and he got rewarded for that.”