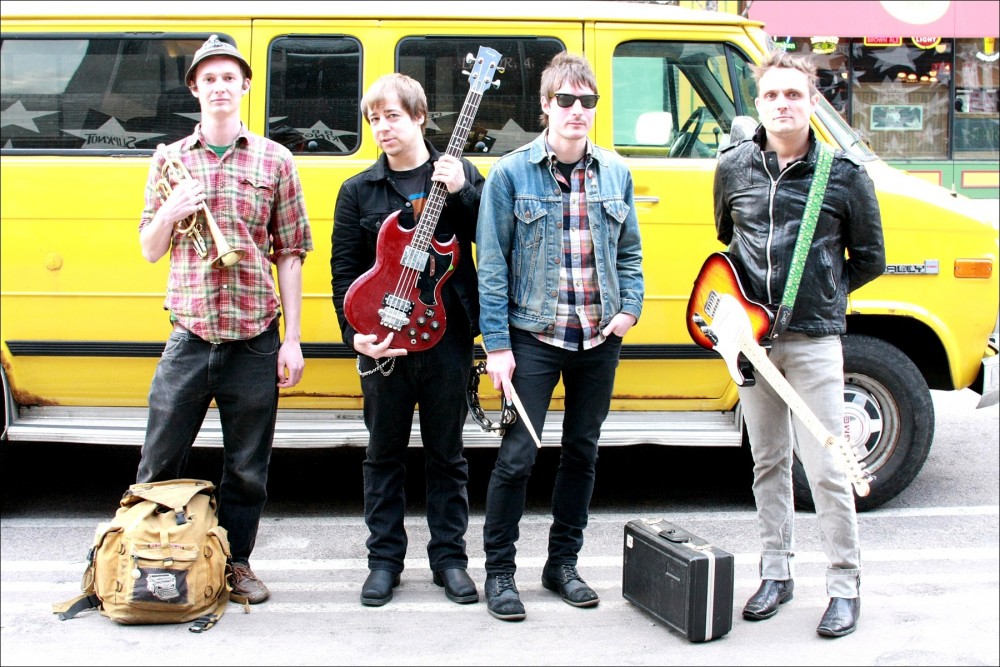 Unless youâÄôre one of those moral purists who get offended by words or youâÄôre the queen of England, itâÄôs hard to have any serious qualms about a band like the Fuck Knights.

The first half of their debut LP âÄúLet It BleedâÄù is a crash course in raucous garage punk. Call it derivative if you will, but according to Greg Mills, Fuck KnightâÄôs drummer, vocalist and head songwriter, innovation wasnâÄôt ever really the point.

âÄúI never thought we were reinventing the wheel and I feel like people who are taking that approach donâÄôt have the foundation or traditional root in the music that theyâÄôre making,âÄù Mills said. âÄúYou got to start somewhere, you got to start with what you know. And thatâÄôs where I was at that time three years ago [writing the songs].âÄù

And after numerous singles and the recent addition of a fourth member, the Fuck Knights are set to release their debut LP this Thursday with a show at the Hexagon Bar.

âÄúLet It BleedâÄù is the kind of album that leaves your head spinning hours after youâÄôre finished listening to it. With the songs averaging roughly two-minutes per piece, the album flies by like a speeding freight train barreling down the tracks towards inevitable destruction. ItâÄôs a 40-minute onslaught of bar-friendly riff-raff, rife with all the snot-nosed arrogance and frenetic energy of an above-average Black Lips record. There are no big surprises on âÄúLet It Bleed,âÄù no intentions of shifting the dynamics of music. ItâÄôs just big riffs, walloping snares and pure, unadulterated rock âÄònâÄô roll.

But while the first half of the album is more of an assortment of all the run-of-the-mill punk fare theyâÄôve released over the last two years, the second half of âÄúLet It BleedâÄù finds the quartet covering some new terrain.

âÄúKnight TerrorsâÄù starts off in typical Fuck Knight fashion, but takes a detour, concluding with a din of ambient noise and scorching reverb-soaked guitar, while in âÄúAbrasions,âÄù horns blare amid a sloppy stir of crunch, clatter and psychedelic chaos.

While Mills insists Fuck KnightsâÄô musical evolution was natural, he admits that he was beginning to feel pigeonholed and explained how the publicâÄôs expectations of the band wore on him over time.

âÄúI think people expected us to play minute-fifteen, verse- chorus-outro stuff for our entire career. IâÄôm a lot more curious than that,âÄù Mills said. âÄúI started to feel constrained. âÄ¦ For me, as an artist, if something is expected of me, IâÄôll just do the complete opposite.âÄù

In their worst moments, the Fuck Knights are repetitive, tiresome and wholly predictable.

In their best moments, theyâÄôre maniacal, as if theyâÄôre on the verge of a mental breakdown, with each song sounding more and more like the musical interpretation of some deranged psychiatric patient desperately trying to kick and scream his way out of a strait jacket.

The Fuck Knights might have cut their teeth on the derivative market, but âÄúLet It BleedâÄù is a testament to the bandâÄôs ability (and willingness) to step outside their comfort zone.