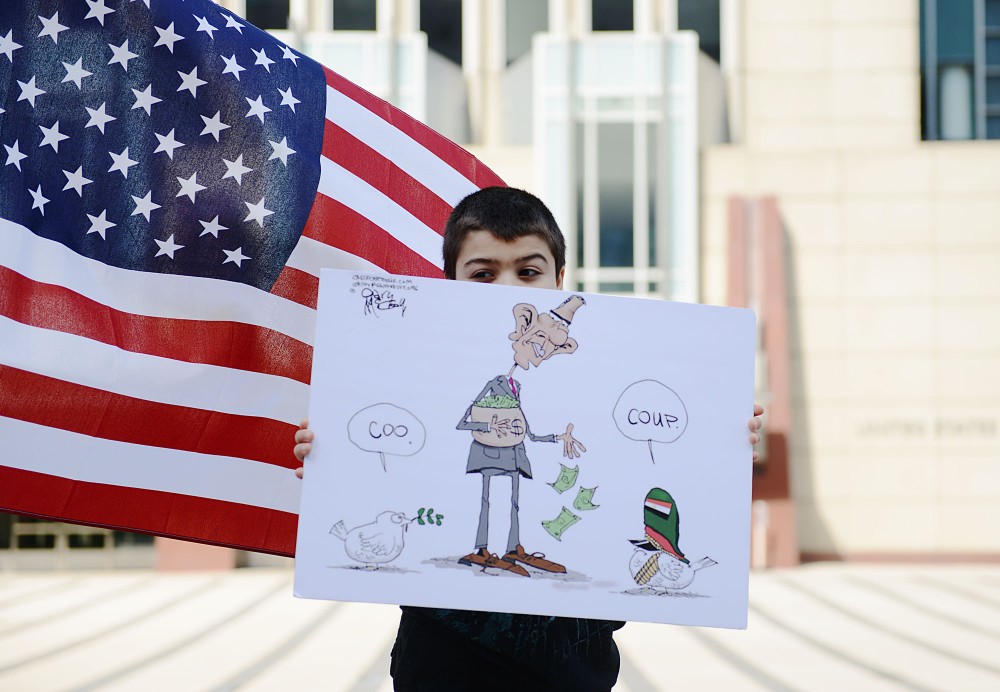 When he came to the University of Minnesota from Egypt in 2009 to get his Ph.D., computer science student Abdeltawab Hendawi had no idea that many of his good friends would be killed before he got back.

Hendawi and other University students gathered in front of the U.S. Courthouse in downtown Minneapolis on Friday to raise awareness about ongoing violence in Egypt that escalated in early July after a military coup ousted Egyptian President Mohamed Morsi from office.

“We want to spread the word to Minnesotans and to Americans,” said Tamer Sharafeldin, a University veterinary medicine doctoral student and member of the nonprofit Egyptian-Americans for Democracy and Human Rights, which organized the rally. “We just want to let them know what’s going [on] in Egypt.”

The Egyptian military unseated Morsi in response to widespread concern about his policies and established an interim government that plans to hold elections early next year, according to the Associated Press.

Egyptian-Americans for Democracy and Human Rights formed in early July in response to Morsi’s removal from office. The Minnesota branch has organized events over the past two months to show support for peaceful protest and democracy in Egypt, Sharafeldin said.

The group, like many in Egypt, is protesting military violence and rallying for Morsi’s reinstatement.

Members say overthrowing a democratically elected official like Morsi goes against their rights.

“I like my vote to be respected,” Hendawi said, “not to be turned to trash.”

About 30 people gathered Friday to shout chants about human rights over the din of downtown traffic — “Hey, Minnesota, make some noise/Egypt, Egypt, hear our voice” — and to hand out flyers to passersby.

Many participants wore yellow signs around their necks with the image of a hand holding up four fingers and the word “R4BIA” — an emblem of pro-Morsi demonstrations worldwide.

Sharafeldin said he has explained to his University advisers and his own students why people are protesting the coup in his homeland.

“They are looking to have a life in democracy,” he said, “a better life for themselves and for their kids in the future.”

Hendawi said he came to the U.S. to get his Ph.D., learn about American culture and then bring what he learned back to Egypt.

He planned to return to his home in Giza, Egypt with his wife and son at the end of this year when he finishes school, but said he doesn’t see a point in returning now that democracy in Egypt has been “cancelled by the military coup.”

Members of Egyptian-Americans for Democracy and Human Rights are also pushing for U.S. military aid to Egypt to be cut, saying the Egyptian military is killing protesters and any hope of democracy.

The U.S. has supplied Egypt with $1.3 billion in military aid each year since 1987, according to a June report by the Congressional Research Service.

On the day of the Minneapolis rally, three of University student Hamada Aboubakr’s friends were injured in Egypt while protesting.

Since the coup removed Morsi from office in July, four of his closest friends have been murdered, he said, and his brother was injured in the neck by a shotgun.

“We need to send a message for Americans to support the human rights in Egypt,” said Aboubakr, a veterinary medicine Ph.D. student.

If he had the chance to talk to University students about the conflict in his homeland, Hendawi said he would just tell them: “Imagine the situation in Egypt is in your country. What will you do?”