The Board of Regents discussed tuition increases, alternative revenue and state funding at a retreat Wednesday. 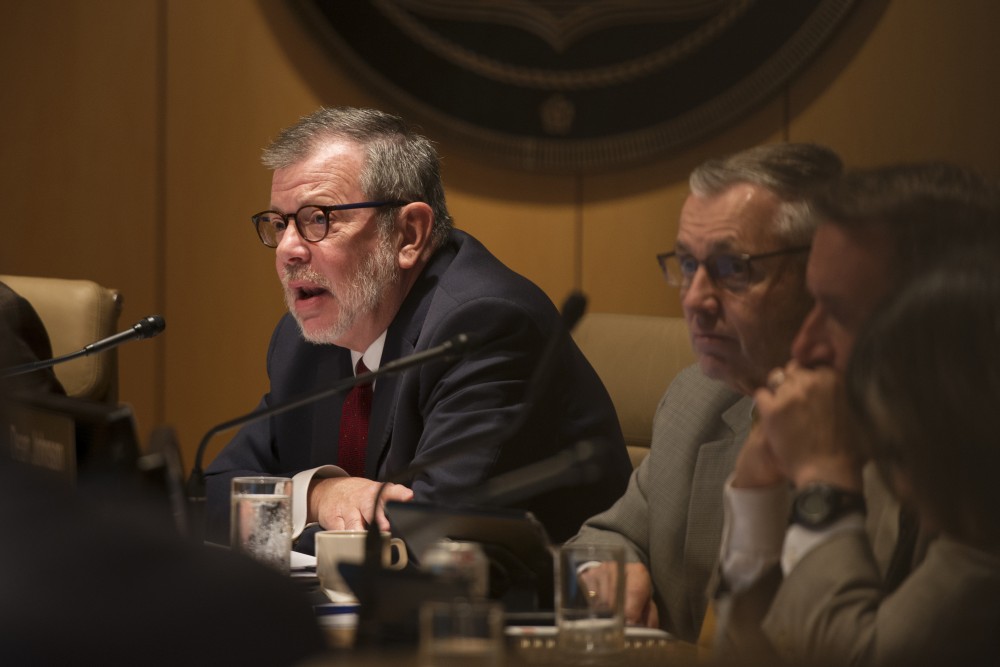 President Eric Kaler speaks during the University's Board of Regents meeting on Friday, Sep. 14 at the McNamara Alumni Center.

The University of Minnesota is running out of alternative revenue sources to avoid tuition increases, officials say.

President Eric Kaler met with board members at a Board of Regents retreat Wednesday in Chaska to discuss decreasing state support, alternative revenue sources and tuition, among other things. Board members said without adequate state funding, the University will need to consider “bold” solutions to prevent sharp resident tuition hikes, including examining the school’s current reciprocity agreements.

State support as a percentage of the University’s budget has decreased over the past decades. DFL Gov. Tim Walz recently proposed the state fund $39.2 million of the school’s $87 million biennial budget ask. Under this proposal, resident undergraduate tuition could rise as much as 6 percent, Kaler said.

“I think it’s clear state support has been declining, but we haven’t done everything we can do to find alternative forms of revenue besides raising tuition, which I’m opposed to,” said Regent Michael Hsu in an interview.

Regents also pointed out growing competition with the Minnesota State system, which received equal or less funding than the University system until 2015.

To prevent resident tuition from rising too fast in the absence full state funding, regents said the school needs to find alternative sources of revenue.

“We need to be very bold and very dramatic in our budget,” said Regent Steve Sviggum.

Kaler said the University has exhausted many of its alternative revenue sources, citing the school’s initiative to cut administrative costs, the University’s partnership with Fairview Health Services, external sales and the Driven fundraising campaign.

“What have we done? … We’ve got to diversify our sources of income. What can we do? Well, let’s launch a big philanthropic campaign. We’ve done that. Let’s grow external sales in services numbers. There’s a limited capacity for us to do that,” Kaler said. “Let’s revisit our agreement with the people who run our hospital and our medical school and see if we can get more money out of them. Well, we did that. … What else can we do? … We can try to reduce overhead costs and administrative costs. We’ve done that. I’m out of things to do.”

Kaler said the school needs to consider further increases for non-resident, non-reciprocity students and changes to the University’s reciprocity agreement with North Dakota, South Dakota, Wisconsin and Manitoba. This agreement is administered by the Minnesota Office of Higher Education in collaboration with the governor, the University of Minnesota, the Minnesota State system and the state Legislature.

While conversations are still in early stages, Kaler said it’s a worthwhile discussion for the board.

“You talk about doing something bold, that’s a bold thing,” he said.