Coach Jimmy Hanson once played on the University rugby team as a student. 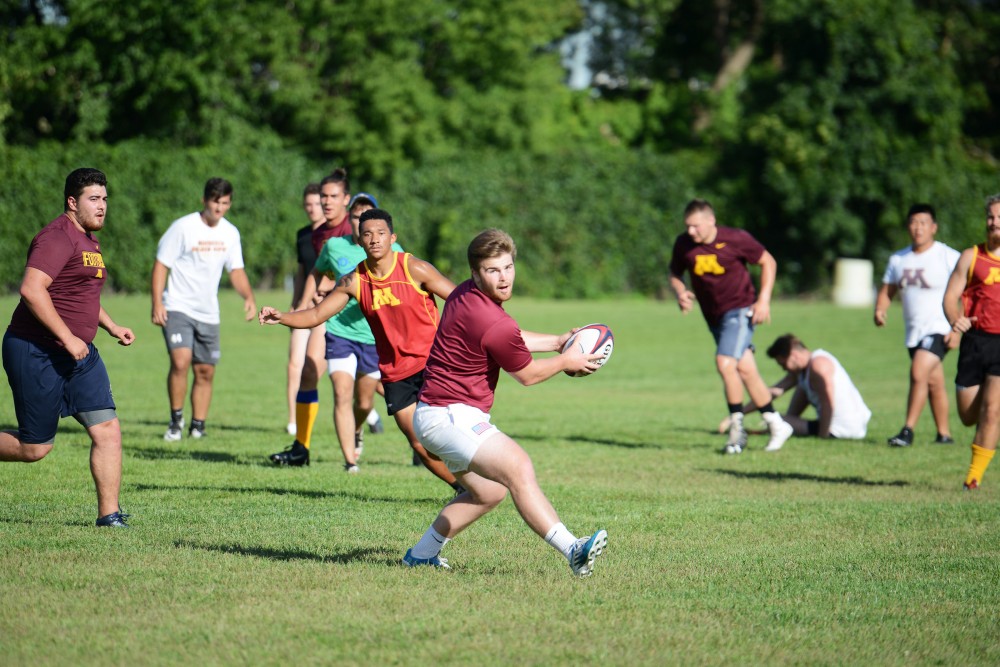 The University of Minnesota Club Rugby Team practices on Sept. 2, 2016.

Minnesota’s men’s rugby team may be a lesser-known program on campus, but it has long been a key part of Jimmy Hanson’s life.

The former University of Minnesota student and rugby team alumnus has recently taken the helm of the club team as its head coach, and he is dedicated to ensuring the success of the program.

“The program did a lot for me when I was a student-athlete,” Hanson said. “Having the opportunity to come back to give back to these guys and the program that helped me become the man I am today is something that felt really important.”

Rugby is not an official varsity sport, but its roots run deep.

The sport was first played on campus in 1883, and the famous “Ski-U-Mah” chant every U student comes to know was originally established to cheer on the rugby team.

Rugby is a sport played like American football, and with this comparison comes similar, intense training practices.

“I personally train probably every day, whether it’s running [or] weightlifting. We have practices with skills three days a week, so we do those for a couple hours a day,” senior Max Enxing said. “Usually we just go on team runs, especially on weekends, like a Sunday after the game on Saturday.”

The team practices every Tuesday, Thursday and Friday from 4-6 p.m., and they lift as a team in the mornings two to three times per week. The individual workouts are more spread out and vary depending on whether one athlete likes to lift or run more on a given day.

The team uses University of Minnesota facilities to practice, and the athletes also have to maintain a good academic standing on top of their involvement with rugby.

An aspect of the team that is even more important than its strenuous training is the unique camaraderie of the sport, a bond that extends off the field for the athletes.

“It’s a long-standing rugby tradition that after a game with another team we will have a social with them and usually eat,” said junior athlete Phil Leung. “That’s really important to keeping rugby culture and showing respect and actually making friends with other teams.”

Hanson upholds all of the standard coaching and cultural assets of a rugby team but also brings his own personal style to Minnesota’s club.

Junior Daav Sannerud said that Hanson emphasizes the philosophy, “Do what you’re good at,” and that he puts a lot of freedom and trust into his players, whether they’re veterans or new members.

“Coach Hanson has been really good at helping me along, and he doesn’t get mad at me when I mess up. He will say, ‘It’s okay, we will explain,’” freshman athlete Luka Pavlakis said. “He’s been good at letting me play and not worrying about having to be confined to a certain role.”

Hanson and the team are already off to a good start. The Gophers won an early match against St. John’s University 52-19 on Sept. 3, and the team aims to continue the success against opponents such as Michigan, Wisconsin and Purdue in the upcoming months.

“At the end of the day, if I do my job properly and I prepare these guys, we’re going to be successful,” Hanson said.