Her third place finish helped her seal the No. 9 spot for Big Ten Championships. 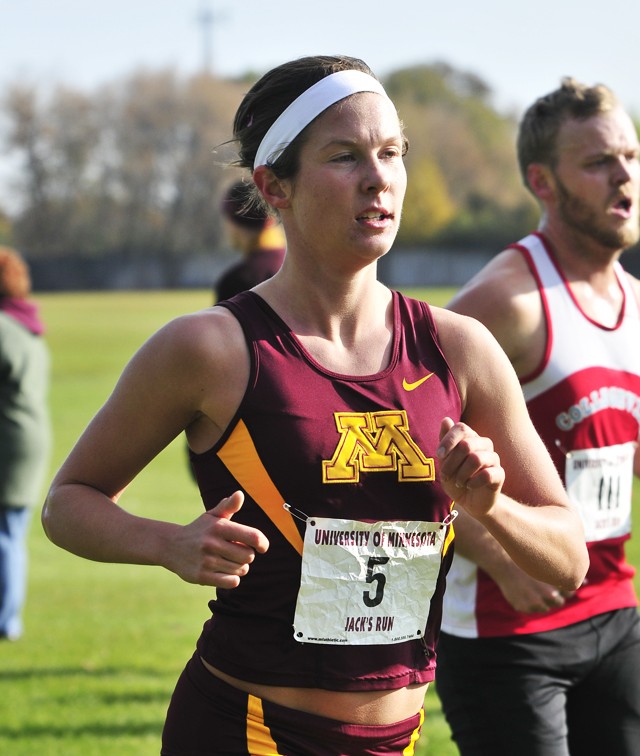 A week before the Big Ten Championships, the womenâÄôs cross country team gathered at Les Bolstad Golf Course to honor the late Jack Johnson . Johnson worked at the University of Minnesota for more than 40 years, spending the last 15 with the cross country team. After his passing from cancer in 2006, Gophers head coach Gary Wilson created JackâÄôs Run to be held in JohnsonâÄôs honor. Now in its fourth year, JackâÄôs Run draws not just current Minnesota runners but alums as well. Emily Brown is an All-American who last competed for the Gophers in cross country in 2006. Johnson was the first equipment manager Brown had when she joined the UniversityâÄôs cross country team, and she ran JackâÄôs Run to help pay respects to Johnson. âÄúI needed a workout and I just always like to run all of JackâÄôs races; track and cross country,âÄù Brown said. Brown now trains with Team USA Minnesota and chose to run in the race to both remember Johnson as well as stay fit for competition. âÄúI didnâÄôt come out here wanting to win it, I just knew I needed a hard effort and I just wanted to pay my remembrance to Jack,âÄù Brown said. The hard effort paid off for Brown as she finished the five-kilometer race in 18:30.74, good for the top finish among all women racers. While Wilson did not race his top eight runners in preparation for next weekendâÄôs Big Ten Championships, he was focused on the performance of the Minnesota runners that did participate in the meet, because those runners would be fighting for the No. 9 spot to go to the Big Ten Championships. WilsonâÄôs team is the two-time defending Big Ten Champion, and he knows if his team looks to make it three in a row he must find a solid No. 9 runner to fill out his team. Senior Jamie Cheever had been experiencing virus-like symptoms for more than a month, which forced an uncharacteristic 59th place finish at the Griak Invitational and caused her to miss last weekendâÄôs Pre-National meet. JackâÄôs Run was the final chance for Cheever to make an impression and she did, finishing third among women in a time of 18:47.59 . âÄúI surprised myself; I felt really good considering IâÄôve been sick for the last month,âÄù Cheever said. âÄúI didnâÄôt try to put too much pressure on myself, but I wanted to be in the top of the group so I can go to Big Tens.âÄù CheeverâÄôs solid finish impressed Wilson and ended any doubt about who would be the No. 9 runner going to the Big Ten Championships. âÄúThat was a good breakthrough; today it was very, very encouraging,âÄù Wilson said. âÄúShe was happy with it, and sheâÄôll definitely go to the Big Ten Meet.âÄù While Cheever sealed the No. 9 spot, Kelly Wilson was named by Wilson as the teamâÄôs alternate for the meet. As for next weekendâÄôs Big Ten Championships? Wilson is ready for a battle and expects contributions from every runner, from Megan Duwell at No. 1 all the way to Cheever at No. 9. âÄúEvery single kid counts,âÄù Wilson said. âÄúThey know theyâÄôre going to be in a battle, and weâÄôre going to go there and fight the war as best we can and hopefully weâÄôll come out on the right side like we have the last two years.âÄù The Big Ten Championships are next Sunday at Penn State University.