The Gophers garnered an upset at 174 and kept the momentum alive from there. 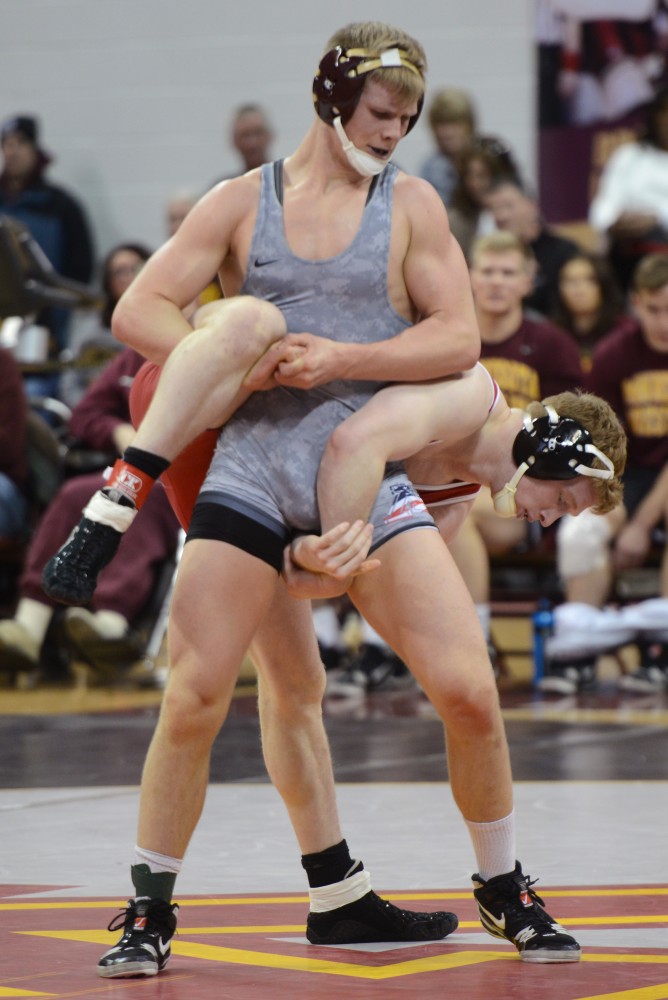 Junior Chris Pfarr takes on Ryan Christensen in the Gophers match against the Badgers at the Sports Pavilion on Sunday, Jan. 15, 2017. Pfarr beat Christensen 7-4.

An early upset by Chris Pfarr over a top-ten wrestler set the tone for Minnesota on Sunday against Iowa State.

“In the first half, the big thing was the bonus points,” said head coach Brandon Eggum. “Momentum is always important in duals and tournaments, and we did a good job today of getting the upsets when we could.”

Pfarr certainly didn’t wait long to get the momentum rolling in his team’s favor, wrestling in the dual-opening match at 174 pounds.

The clear underdog against Iowa State’s No. 10 Lelund Weatherspoon, Pfarr attacked early and often and earned four takedowns while denying Weatherspoon any of his own to take a 10-4 decision.

“I knew my style matched up real well with [Weatherspoon’s],” Pfarr said. “If I [kept] moving aggressively, I knew he was going to break.”

While Pfarr’s win was certainly big for Minnesota, it turned out to be the only victory for the Gophers in which they did not accumulate bonus points.

Redshirt sophomore Brandon Krone wrestled in his first dual of the season for Minnesota, replacing Bobby Steveson — who had a minor injury — at 184 pounds.

Krone showed no signs of rust, however, and cruised to a 10-2 major decision for Minnesota.

“We just gave Brandon the opportunity, and he went out and did a good job,” Eggum said.

Minnesota’s steady hands of Brett Pfarr at 197 and Michael Kroells at heavyweight continued its production, with Pfarr earning his first pin of the season, and Kroells following with a technical fall.

A pin by Ethan Lizak at 125 pounds gave Minnesota a comfortable 24-point lead going into halftime.

A Tommy Thorn pin at 141 pounds was sandwiched between the Gophers’ sole losses on the day — Mitch McKee at 133 and Ben Brancale in his season debut at 149 — bringing up two ranked veterans in No. 8 Jake Short at 157 pounds, and No. 18 Nick Wanzek at 165.

After Short earned a major decision to extend Minnesota’s lead, Wanzek took the mat looking to continue his rebound from an upset loss two weeks ago to Iowa’s Joey Gunther.

After a hard-fought first period, Wanzek came out firing in the second, and he earned a pin just 18 seconds into the frame.

The final fall put the Gophers at a total of 40 points, a number they hadn’t reached in a dual since 2013 against Wyoming.

The dual was the final one for the Gophers this season, and Wanzek said it’s a big confidence booster heading into the Big Ten championships.

“It gives us confidence to know that we have wrestling abilities against the best in the country,” Wanzek said. “When we get to Big Tens and NCAAs, we know that we’re right there with those guys and can go toe to toe with them.”