Restaurant review: Masu at the Mall

The flavors of the Far East have been pleasing Northeast diners since last April, when Masu Sushi and Robata opened. A&E’s resident food monster gave the new Mall Of America location a try to see if it measured up. 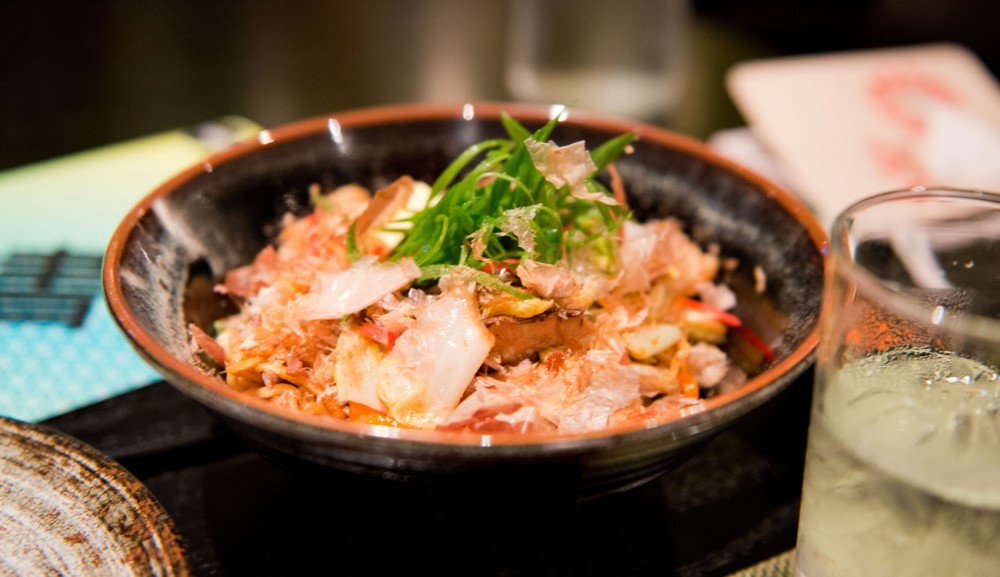 A portion of the yakisoba noodles sits on display at the newly-opened Japanese restaurant Masu Sushi and Robata on Saturday at the Mall of America.

Shoppers rush through the mall, quickly passing the blinking pachinko machines and vibrant Japanese pop-art photography. Hurrying to the food court, they pass by black polished tables set with chopsticks and traditional Japanese ceramic dishes. In their mad dash to the next sale, they blindly overlook the salty yakisoba, the refreshingly cool seaweed salad and an array of creative sushi rolls.

They are missing Masu.

The playful Japanese eatery in Northeast Minneapolis (which opened in April of 2011) was so well-received that a second location at the Mall of America opened last week to satisfy the hunger of mall rats.

Surrounded on all sides by conventionally American establishments, Masu stands out with its seafood-centric menu and sleek aesthetic. Even the lime green logo in the front of the restaurant pops next to the reds and blues of neighboring signs.

Like America’s diverse range of cooking styles from soul food to New York deli fare, Masu serves up a bevy of Japanese specialties. Izakaya (pub snacks), noodles, sushi and robata (grilled items) — which in Japan would all be served at separate restaurants — are all here.

Just like its big brother in Northeast, Masu MOA serves up exceptional grub.

Many of the dishes come on small plates and are meant to be shared, but ordering individually is also OK. With food so good, sometimes it’s hard to share.

My meal at Masu began on a high note. The seaweed salad, found in the cold izakaya section of the menu, was a small bowl filled with tender, slippery strands of fluorescent green seaweed marinated in a heavy sesame dressing. Garnished with pickled root vegetables and bean sprouts, this cool salad was both refreshing and intense.

The meal continued with the Dynamite sushi roll. This rice roll of tuna, albacore, avocado and chili sauce was presented elegantly in several flat cylinders on a angular white plate. My enthusiasm for pseudo-sushi (sushi that uses non-traditional, Western ingredients) is great, but sadly the Dynamite roll did not live up to its name. The filling was fresh and didn’t have that horrible fishy taste that sushi of the Midwest can sometimes carry, but I was expecting a greater punch from the spice.

The grilled items were the next stop on the taste train. Unlike the spot in Northeast, the robata items at the mall are unfortunately cooked on gas instead of charcoal due to the fire regulations of the building. Served on a bed of pickled root vegetables, the grilled eggplant had the zesty accompaniment of a sweet miso sauce but desperately needed some of that smoky richness that only charcoal fire provides.

For the last item I sampled, I had to get the so-raved-about noodles, which Northeasters can’t seem to get enough of. Filling and delicate, Masu’s yakisoba noodles were seasoned to perfection. Tossed in a salty dressing and topped with mushrooms, cabbage and your choice of protein, then garnished with fish flakes and mayonnaise, these noodles are unique and rich. Paired with a small bowl of seasoning, you can make the dish as spicy as you dare. These noodles provided a delicious end to the meal.

In its first few weeks of service, the staff at Masu is still finding its groove. It doesn’t yet have that rhythm and flow that teams that have been together a long time do, but the waitstaff was always pleasant and could answer any questions about the sometimes complicated cuisine. I expect this team will be polished and as sharp as the chefs’ sushi knives within the next couple of weeks.

I applaud Masu for opening in a location where, before its arrival, Bumba Gump’s shrimp cocktail was the most exotic dish one could find. It provides a serene atmosphere compared to the chaos of the mall and serves scrumptious food for reasonable prices (about $15-$25 per person). I hope shoppers and suburbanites alike stop in to get a taste of this out-of-the-ordinary mall grub.

Three out of five food monsters.