The University launched the Pride Alumni Network to create opportunities for students to make meaningful connections. 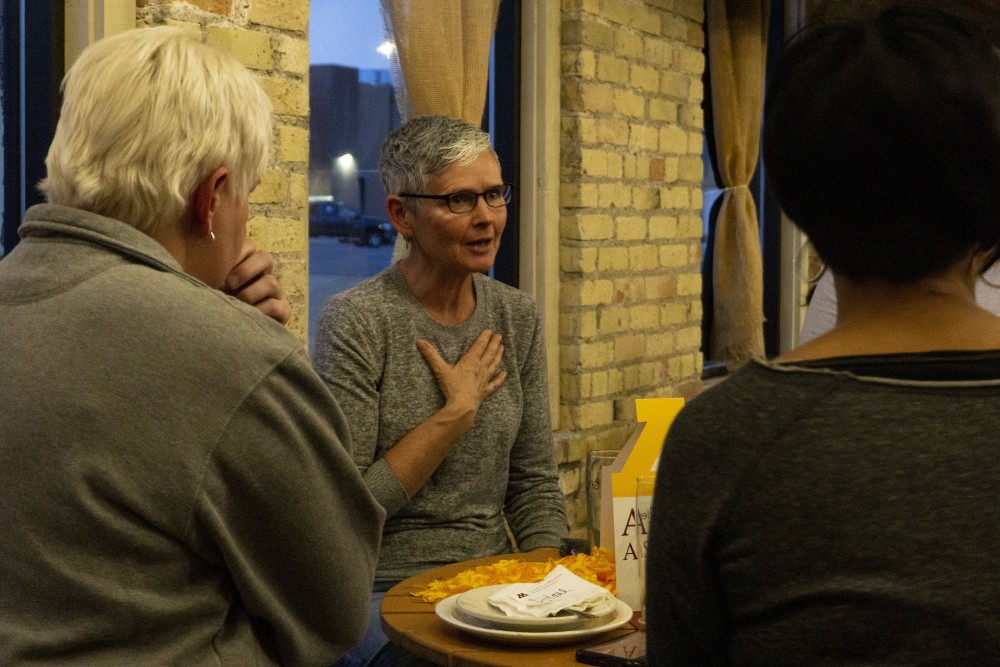 Cathy Berlin, a University of Minnesota alumna, talks to other University alumni at the Urban Growler Brewing Company for the Pride Alumni Network Launch on Friday, Oct. 11.

Though the temperature plunged to 30 degrees Fahrenheit, about 60 University of Minnesota community members filled Urban Growler Brewing Company in St. Paul on Friday for the launch of a new University alumni network for LGBTQ individuals.

The Pride Alumni Network, hosted by the University of Minnesota Alumni Association, aims to create opportunities for LGBTQ students to maintain meaningful connections with the University and one another, said Saby Labor, director of Gender and Sexuality Center for Queer and Trans Life.

During the event, which was held on National Coming Out Day, speakers discussed the history of the LGBTQ community in Minnesota and the importance of maintaining it by establishing networks. Attendees gathered by round tables decorated with maroon and gold trinkets, sharing thoughts and enjoying appetizers.

Steve Davis, the University Alumni Association’s director of affinity engagement, collaborated with other affinity networks to hold the event.

“I am really excited [about] building that connection for the [LGBTQ] community because it is something that I feel like it is a good establishment to build and create a relationship with the students,” Davis said.

Minneapolis and St. Paul were among the first cities to provide certain protections for LGBTQ individuals. In 1975, Minneapolis passed an ordinance preventing discrimination against transgender and gender non-conforming individuals, making it the first city in the country to do so.

Class of 1977 alumnus and LGBTQ advocate Charlie Rounds was one of the speakers during the event. He said he attended the event with his husband Mark Hiemenz, who is also a University graduate.

“The University is one of the leading universities on LGBT issues and yet we don’t have a very good LGBT alumni presence. So, tonight we want to change that,” Rounds said.

Rounds said the event was only the beginning, and he expects the Pride Alumni Network to grow.

Alumna Andrea Jenkins, vice president of the Minneapolis City Council and University adviser, said it was interesting to learn about how various alumni and different communities within the University are coming together to build a network.

“I think it is really positive and poignant that today is National Coming Out Day, so to host this event on this day I think is really powerful,” Jenkins said. “You know, we always have to keep in mind equity, no matter what space we are in and how that’s being demonstrated with our actions.”

Davis said as the network moves forward, they will try to be vigilant about creating a sustainability plan for the alumni networks.

Music education senior Haruka Yukioka, the outreach manager of the Queer Student Cultural Center, said it’s important for current students and student groups to draw on the experiences and talents of alumni and to remember that they are not alone.

“It is a great step for queer [University] connected folks. Students now know that there is somewhere to go for support,” Yukioka said. “Alumni know that there are folks they can talk to to share their experiences. This is a great initiative.”

Editor’s note: Haruka Yukioka serves as a student director on the Minnesota Daily’s Board of Directors.

Correction: A previous version of this article misstated which group hosts the Pride Alumni Network. The alumni network is overseen by the University of Minnesota Alumni Association.