Rodney Williams has starred during the Gophers’ Final Four run in the NIT. Minnesota plays Washington on Tuesday. 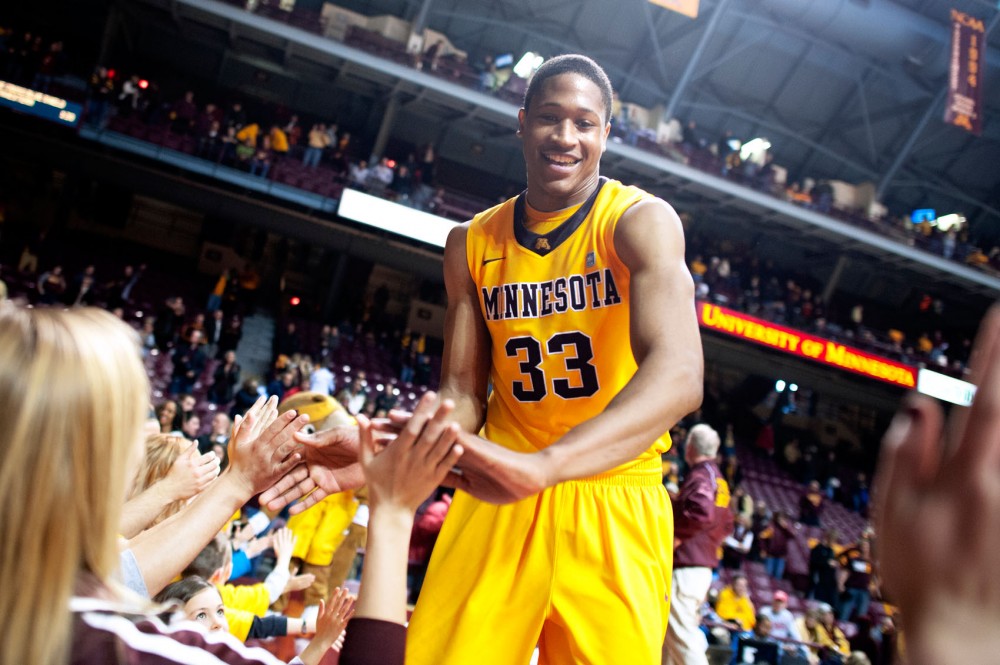 A month ago, Rodney Williams played his worst game in the season in the Gophers’ 69-50 home loss to Indiana.

Williams scored three points on 1-for-2 shooting as Minnesota blew an opportunity to end its four-game losing streak and re-establish itself as an NCAA tournament contender.

“Something else is going on,” a dejected Tubby Smith said about his star player after the Feb. 26 game. “In his mind, he just wasn’t there today at all.”

Whatever was going on seems to have left Williams’ mind less than a month later amid Minnesota’s impressive postseason run.

Since the loss to Indiana, the junior has averaged 17.9 points and 6.1 rebounds while attempting 10 or more field goals in all seven of his games.

He has led the Gophers to five victories during that stretch, including three in a row to vault the team into the NIT Final Four, where it will face Washington on Tuesday.

“With Ralph being out, I feel like I definitely need to be more aggressive,” said Williams, who has averaged 17.0 points on 10.1 field goal attempts in games Sampson has sat out. “But my teammates have been doing a really good job of making it easy for me.”

Williams has gotten better with each game — he tied his then-career high of 21 points in each of the NIT’s first two rounds before setting a new career-high with 24 points in Wednesday’s win over Middle Tennessee State.

Despite his highflying antics, Williams’ surge has flown under the radar. Minnesota’s recent success has been attributed in large part to the emergence of freshman point guard Andre Hollins.

Both Williams and Hollins have scored in double figures in each of the Gophers’ last seven games. But Williams has been the steadier of the two stars, showing patience and poise as the team’s most experienced player.

While Hollins has struggled with slow starts, Williams has exploded in the first half of games and then stepped aside in the second half as Hollins has taken over.

“He’s learned how to lead,” Smith said Saturday. “I think now he’s accepted that role. He understands now without Ralph, without Trevor, [he’s] the next guy in line.”

Williams has also upped his free-throw percentage by 11 percent in his last seven games, making 23 of 35 shots (66 percent) from the charity stripe. He is a 58-percent free-throw shooter for the season.

Williams has earned many of his recent free-throw opportunities by taking defenders off the dribble and attacking the basket. But he has also benefitted from the improved play of his teammates.

“We’ve got guys all around that are being a threat out there,” Williams said. “It’s making it a lot easier for me to get shot opportunities.”

He also credited the faster pace of play that the team’s NIT opponents have allowed it to play.

“The transition game has been good to us,” Williams said. “It’s good that it’s coming up now, because we needed something different.”

Minnesota ended the Big Ten’s regular season with six losses in seven games. In several of those games, opponents forced the Gophers to play a halfcourt game that kept the score in the 50s and 60s — far from where Minnesota wanted it.

Williams was especially ineffective against tight defenses. He lacked aggressiveness on the perimeter and struggled to get open looks inside. At times, like in the Indiana game, he lacked effort.

Such inconsistency has defined Williams’ career. He was a human highlight reel in his first two seasons but provided little else to the team. Even early this season, when he replaced Mbakwe as the team’s leading scorer, he appeared incapable of using his athleticism to create offense in key situations.

“He’s just growing up,” Smith said. “He’s had to make the biggest adjustment of any player on the team as far as where he plays and what we ask of him.”

Smith’s biggest request will come this week, as Williams will try to lead Minnesota to its first NIT championship since 1998.