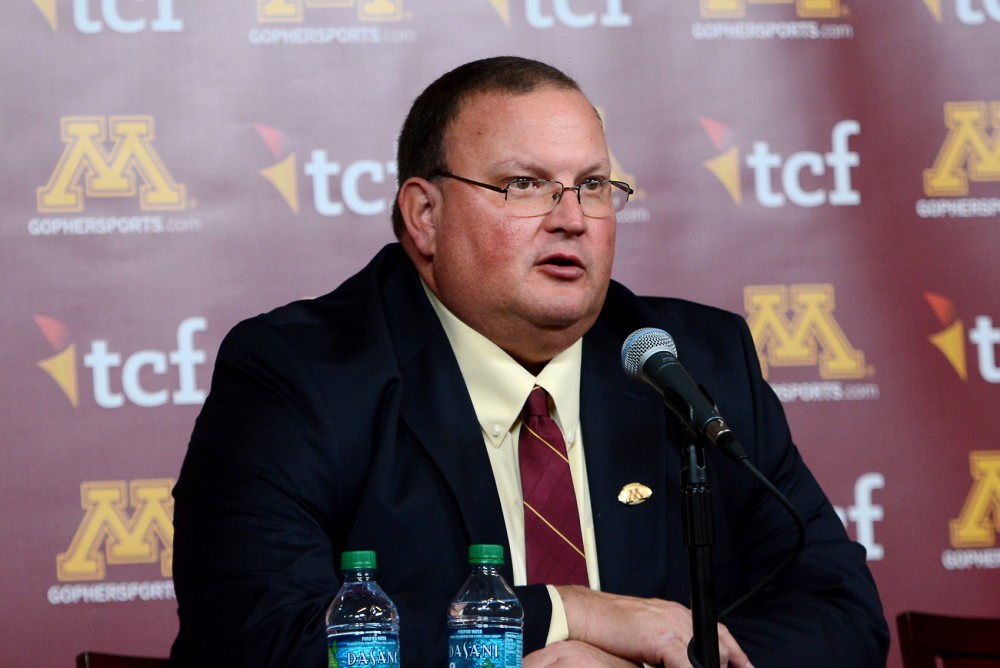 Tracy Claeys speaks at a press conference after being named head coach at TCF Bank Stadium on Nov. 11.

The University of Minnesota football team cut short their boycott Saturday morning, breaking their vow to cease all football activities until suspensions on 10 players were lifted.

Head football coach Tracy Claeys says he could now lose his job, players plan to sue the victim-survivor who accused the 10 players of sexual assault, and the hearing process is slated to begin in January.

Claeys says he could lose job*

In the same interview, Claeys said he intends to donate $50,000 to assist victim-survivors of sexual assault.

Back in November, reports surfaced that Claeys would likely receive a contract extension sometime during the offseason. Athletics director Mark Coyle didn’t publicly comment on the extension, but did say Claeys had his full support.

Hutton to the Minnesota Daily: There are plans to sue ‘everyone.’

All 10 players suspended from football activities plan to file lawsuits against “everyone,” including potential suits against the alleged victim-survivor, Lee Hutton — the attorney representing all 10 players — told the Minnesota Daily. He wouldn’t disclose other possible recipients of a suit, but added they would come “pretty soon.”

“We have certain individuals that we believe have infringed on my clients’ constitutional and civil rights, and possibly have provided collusion in other civil conspiracy claims that damaged my clients’ image,” Hutton said.

No recruits have de-committed

So far, no player for the Gophers’ 2017 recruiting class has publicly announced they are no longer committed to the program.

Whether the boycott affects recruiting in the future remains to be seen. Blaise Andries, the Gophers’ top recruit for 2017, reaffirmed his commitment to the program after the boycott was announced, but hasn’t commented since it was lifted.

Goal Line Club president on Kaler, Coyle decision: ‘I have no problems with it at all.’

Bob Hughes — the seven-year president of the football boosters Goal Line Club — reaffirmed his organization’s mission Saturday night to “do everything in our power to get fans excited about Golden Gopher football” and said the recent events have not changed his perception of the program.

Hughes said the organization will continue to support Claeys and his staff. He also said he thinks Coyle and University President Eric Kaler “did a good job” handling the situation.

Antoine Winfield Sr., the father of one of the suspended players, said Thursday night that if the president and athletic director keep their jobs, his son would not attend the University of Minnesota.

The Saturday demonstration was planned Tuesday, after the University said the 10 players were suspended from all football activities because of their connection to an alleged Sept 2. sexual assault.

Players unite on Twitter by using #NLMB, or ‘Never Leave My Brothers’

Shortly after the decision to lift the boycott was announced, multiple Gophers football players took to Twitter and tweeted out their support for the team with the hashtag “#NLMB,” which stands for “Never Leave My Brothers”.

Other people on Twitter used the same hashtag to criticize the football team, accusing them of not understanding consent and offering their support for sexual assault victim-survivors.

Kaler said at a Saturday news conference that the players will likely enter the University’s hearing process in January. All 10 have filed an appeal to the University’s decision, Hutton said.

The University’s decision is based on the school’s Office of Equal Opportunity and Affirmative Action (EOAA) report, which investigates Title IX cases related to sexual assault.

Five players are facing expulsion, four of them are facing a one-year suspension and one is facing probation as recommended by the University’s Office for Student Conduct and Academic Integrity.

Holiday Bowl will go ahead with ‘no strings attached’

The football team will participate in Holiday Bowl with no stipulations or strings attached, Kaler said at the Saturday news conference.

The Gophers play Washington State on Dec. 27 in San Diego at Qualcomm Stadium.

*Update: At a Sunday evening press conference, Claeys clarified that his statement about being fired was in reference to his initial conversation with Gophers players on Thursday, Dec. 15, before the boycott was announced.