Profs sing the blues after hours 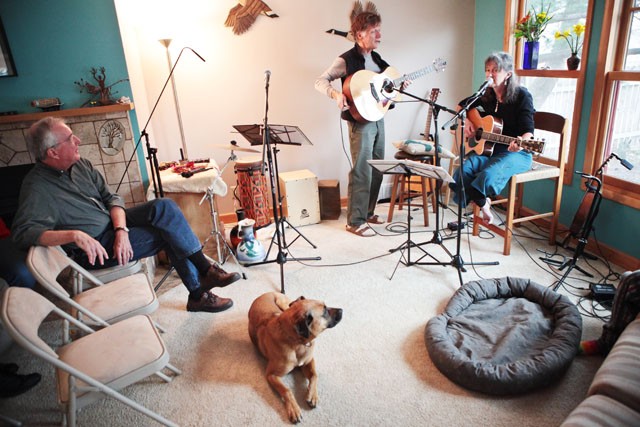 Nursing Professor Trish Painter checks the levels for the recording of her second cd Sunday afternoon in her house off of East River Parkway. Painter held a house concert Sunday evening where friends and neighbors came to listen and have dinner together.

Patricia PainterâÄôs songwriting career started when she got her second dog. AuggieâÄôs howling inspired Painter to write âÄúBlack Dog Blues,âÄù one of the songs featured on âÄúDog Tracks,âÄù her first release.
Painter, a School of Nursing associate professor, spent a year and a half laying down those dog tracks with her partner Ken Beck at a local friendâÄôs studio.
On Sunday, Painter recorded her first live CD before a small audience of friends and fans.
On top of teaching two classes at the University of Minnesota and writing grant proposals, Painter is the secretary of the Minnesota Association of Songwriters.
Painter said the music gives her balance, but aside from a few nursing school coworkers, she has kept a low profile about her music at the University.
âÄúI think [students] can sense thereâÄôs probably more to me, even though they donâÄôt know I do this,âÄù Painter said.
While many people write songs to âÄúsell to Nashville,âÄù Painter writes songs because when inspiration hits, she has to do something with it.
âÄúWhat are the chances of my songs getting on the radio?âÄù Painter said. âÄúThatâÄôs not why I write.âÄù
Painter hasnâÄôt marketed her music much either. She estimates sheâÄôs sold about 200 CDs and given away more. She pays a small fee to an organization called CD Baby that puts the CD online so people can order it. Then services like iTunes and Amazon pick it up.
Painter and Beck also perform at open mic nights, coffee houses and city parks like Lake Harriet and Minnehaha. Painter writes and sings while Beck, a classically trained guitarist, strums accompaniment.
Likely friends
A year and a half ago, Painter hosted a 50th birthday party for Diane Treat-Jacobsen, a nursing school colleague. She and Beck performed a song they dedicated to Jacobsen and invited other guests to give birthday wishes.
One woman, a physiology lecturer, said sheâÄôd also like to sing. Lisa Carney Anderson sang a Puccini aria in the living room and âÄúknocked everybodyâÄôs socks off,âÄù according to Jacobsen.
And thatâÄôs how the musical connection spread. Painter gushed about AndersonâÄôs opera voice. Anderson got to know PainterâÄôs dog songs. She and her husband sat in the audience Sunday for PainterâÄôs concert.
Another nursing school faculty member and âÄúDog TracksâÄù fan, Karen Monsen, knew she had to get a copy of the CD to her sister, a dog owner in the Twin Cities metro area.
Monsen didnâÄôt know that her sister had recently been walking outside when her dog jumped up and tripped her, causing a lot of physical pain and a rift between the dog and its owner.
After listening to PainterâÄôs CD, MonsenâÄôs sister broke down and cried, realizing it had just been a loving, playful incident that she didnâÄôt want to alienate her from her dog.
âÄúIt was really beautiful for her to have that experience,âÄù Monsen said.
A âÄòsecond identityâÄô
Music pervades Carney AndersonâÄôs daily life.
âÄúWhen Lisa comes down the hall, you know sheâÄôs coming âÄôcause sheâÄôs whistling. ThatâÄôs her second identity,âÄù Painter said.
She was in the Minnesota Chorale, sang the soprano role in HandelâÄôs Messiah and took part in a madrigal group while getting her masterâÄôs degree. SheâÄôs also recorded in a number of genres.
Every other month, Anderson sings at the University Club with two friends who play jazz piano and bass.
Last Friday, she taught two courses, met with students, proctored makeup exams, then rushed to St. Paul for a 5:30 p.m. performance âÄìâÄì throwing on a black velvet jacket she keeps in her car.
âÄúI donâÄôt have to get out my rhinestones or anything,âÄù Anderson said.
Anderson likes to use musical examples to teach science. She used music to illustrate the difference between sensation âÄìâÄì being able to detect a stimulus âÄî and perception, which is the ability to provide a context for the stimulus.
Recognizing the sound of music is a sensation, she said, but labeling the sound as Louis Armstrong playing the âÄúWest End BluesâÄù is perception.
Clinical professor Joanne Disch was the program coordinator for the School of NursingâÄôs 100th anniversary celebration at the Minneapolis Convention Center in 2009. Disch hired Anderson as a headlining act for the event.
Disch said Anderson can take a song from the 1940s and personalize it so âÄúitâÄôs like youâÄôre hearing it for the first time.âÄù
She moves around the stage, singing boldly, then reduces her voice to a whisper.
Anderson said she has learned that there are musicians who are as passionate as she is, everywhere she goes.
âÄúAnd thatâÄôs just the music! ItâÄôs absolutely everywhere.âÄù