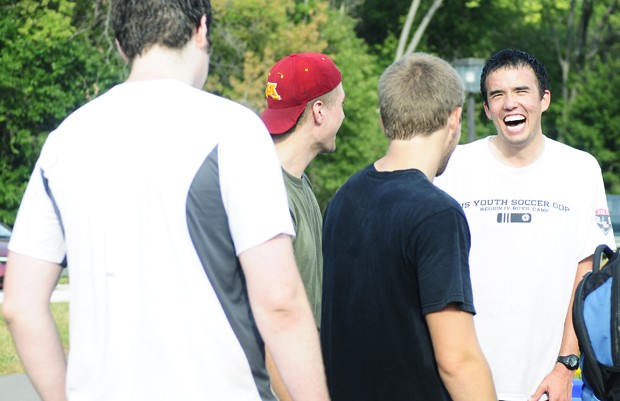 A group of University of Minnesota students gathered at the East River Flats and put down their books to throw around water balloons as an end to the first week of classes Friday afternoon. The group, Fun Interactive Recreational Events (FIRE), was started this year and aims to provide cheap entertainment for students at the University. Friday afternoon entailed an hour of relaxed outdoor fun, including the water balloon fight and touch football games. The goal was to replace any worries of tough classes or strange new roommates with trivial concerns like sorting out football teams or running out of water balloons. One participant heartily approved of the activities: âÄúInvite everyone you know, because this was awesome,âÄù he yelled to the group. Group president and founder Jay Thunstrom said the group grew through word of mouth and that most students who showed up heard about the event from a friend or on Facebook. âÄúWe were a little bit worried no one would come,âÄù said Thunstrom, a mechanical engineering junior. But 25 students did show up, and the group agreed afterwards that the event was a success. âÄúI wasnâÄôt really sure who was going to come âÄ¦ it just ended up working out a lot better than I thought it would,âÄù physics junior Brian Benton said. Materials for the afternoon, which included tables, buckets and a football, came from various members of the group. Sophomores Bergen Butala and Kristi Weinmeister , who heard about the event because they live in the same building as Thunstrom, said they were definitely coming back for the next activity, even though it hasnâÄôt been planned yet. Thunstrom said he and other organizers were considering slacklining âÄî a tight-rope walking activity âÄî at the University Recreation Center. Other possible outings include a trip to Lake Calhoun , which could end up being one of the groupâÄôs more ordinary activities. âÄúWe plan on doing âÄ¦ unusual type things like random events, not actual sports,âÄù FIRE co-president and co-founder Michael Cowger said. The group has not yet applied for student group funding, but entrepreneurship junior Cowger said the group would expand to bigger events if granted more money. âÄúIf we had [grant money],âÄù Cowger said, âÄúweâÄôd be able to do a lot with it.âÄù