A powerhouse in state sports, Eden Prairie High School feeds the U of M with athletes. 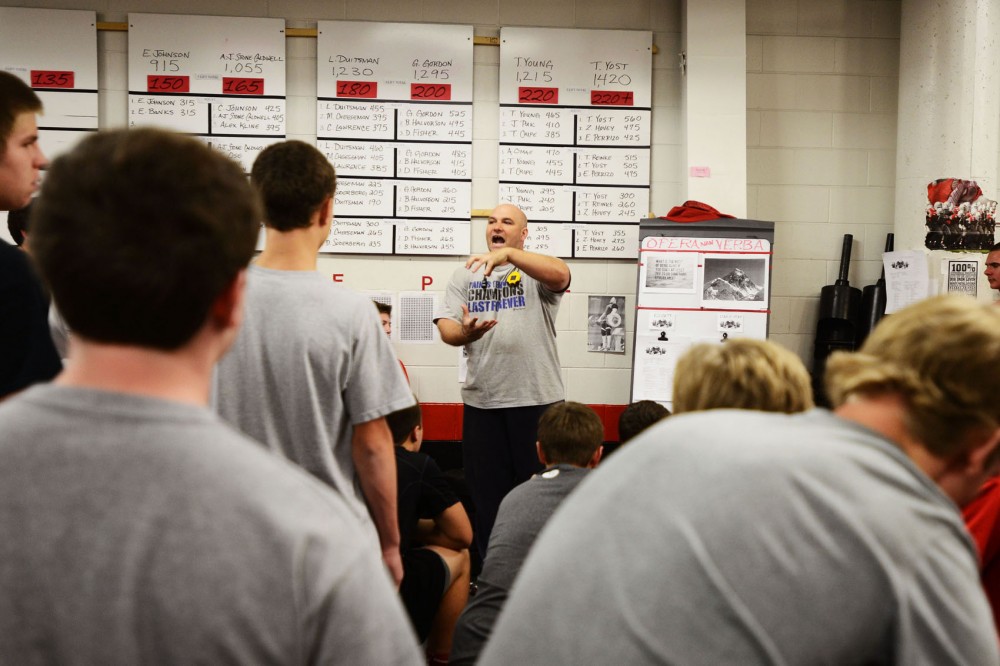 Eden Prairie High School has been likened to a minor league for the University of Minnesota.

With 20 alumni currently on University teams, Eden Prairie has one of the most impressive high school sports programs in the state.

Nestled in a suburb about 20 miles southwest of the University, the school has become a powerhouse in state high school athletics. Since 1996, it has won eight football titles and established a winning tradition that extends to nearly every one of its athletics teams.

In each of the past five years, Eden Prairie has won the Minnesota State High School League Challenge Cup for its class — an honor awarded to schools based on their cumulative success in athletics and fine arts tournaments.

“I think that the big thing Eden Prairie taught me was a winning mentality,” said Taylor Uhl, a sophomore Gophers soccer player who won a state title at Eden Prairie. “If you don’t come out and win, you’ve lost.”

Eden Prairie boys’ hockey coach Lee Smith said the school is a pipeline for the University.

Like many kids throughout the state, many Eden Prairie Eagles grew up wanting to play for the Gophers.

A variety of factors help make their dream a reality.

Eden Prairie has an enrollment of approximately 3,036 students.

The school ranked second in the state in student population for the 2011-12 academic year, trailing only Wayzata, a conference foe.

Eden Prairie’s athletic success is about more than numbers.

“I think that’s really demeaning to our kids because what they’re saying is, ‘Your kids don’t work hard. They’re just at a big school,’” said Mike Grant, the school’s athletics director and football coach.

Grant said Eden Prairie’s enrollment is declining, but he pointed to the school’s athletic success when it was smaller.

Gophers men’s hockey coach Don Lucia called it “survival of the fittest” to play sports in Eden Prairie growing up.

“Just because of the sheer numbers … by the time you get to the high school level, a lot of kids have [fallen] by the wayside,” Lucia said.

The school’s size leads to more intra-squad competition, and positions on its sports teams aren’t guaranteed.

“It pushes you a lot,” Gophers soccer player Katie Thyken said, “because you know that there’s always someone that wants that spot, that’s going to take that spot away from you.”

Thyken, an Eden Prairie alumna, said having that competitive nature might be the reason so many of the school’s athletes attend Division I schools.

“We have that drive that other people might not have because [others] were the top — they were the pinnacle of everyone,” Thyken said.

Shayne Mullaney, a freshman on the Gophers women’s basketball team, said she carried Eden Prairie’s competitive nature and intensity into college. She said seeing everyone excelling at Eden Prairie was a motivator.

“You kind of play off of everyone’s energies,” Mullaney said. “There’s so much energy put into sports.”

Many teams at the University have multiple athletes from Eden Prairie.

The baseball team has five, soccer has two, women’s basketball has two and the list goes on.

Ryan Grant, current Gophers football player and son of Eden Prairie athletics director Mike Grant, said it takes players a long time in college to develop the kind of chemistry they had with their high school teammates.

That’s less of a problem for student-athletes who come to college with their high school teammates.

Freshmen women’s basketball players Mullaney and Jackie Johnson have played together since sixth grade. Both said that experience translates to chemistry on the court.

Uhl and Thyken, the soccer team’s top-two scorers, have a similar connection.

Thyken said she’s able to anticipate Uhl’s moves and where she’s going to be because they’ve played together for so long.

Perhaps the strongest connection between the two schools comes through their baseball programs.

Mike Halloran said it’s no fluke that so many of them ended up at the University.

“They’re all legitimate Division I players,” Mike Halloran said. “If they’re not good enough to play there, we’re not even talking about them.”

Sophomore Gophers baseball player Tony Skjefte said he grew up a Gophers fan, but knowing former teammates were at the University factored into his decision.

“I grew up across the street from [junior catcher] Matt Halloran,” Skjefte said. “When he committed here … it just really stuck out to me.

Eden Prairie student-athletes come to college well-prepared for the next jump.

Many attributed their preparation to the coaches they had growing up.

“We’re really privileged to have the coaches that we had in high school,” Skjefte said, “and that’s for anyone in any sport.”

Kyle Rau, a sophomore on the Gophers hockey team, said Eden Prairie kids had a head start because of their coaches.

“When you’re younger, coaches are everything,” Rau said. “They develop you, teach you good habits [that] you carry on.”

Hockey coach Lee Smith, who coached Rau and Blake Thompson — another current Gophers hockey player from the school — said the coaches feel a strong responsibility to treat student-athletes with the utmost respect.

“The kids aren’t ever really getting yelled at and stuff like that,” he said. “We’re coaching them.”

Matt Halloran said his father used coaching techniques he learned from Anderson and other coaches at the University.

Skjefte said the Gophers’ bunt defense and hitting approach, among other things, are similar to what he learned at Eden Prairie. He said Mike Halloran gave Eden Prairie players insight into what Division I baseball would be like, which aided the transition.

Under Mike Halloran, the Eagles were 354-123-2 and won two state championships.

Anderson said he noticed that Eden Prairie players come to the Gophers with more confidence and believe in themselves as players.

“It’s hard to gain confidence unless you’ve had some success,” Anderson said. “They have a culture. They understand the level of commitment it takes to be successful and the work that goes into it.”

Eden Prairie has some of the finest high school athletics facilities in the state.

In 1997, voters approved a $16.85 million bond referendum, part of which the school used to build an activities center.

The school also has a bubble dome, which is rare for a high school.

Mike Halloran, the former head baseball coach at Eden Prairie, said the dome has been used a lot since its creation. He said it’s also a revenue-producer for the district because the school rents it out to associations for soccer, softball and baseball, among other sports.

Grant, the school’s athletics director, said the activities center was built because the community approached the school board and said it was necessary for youth sporting groups.

He said the school could get by with less. For example, he said it doesn’t need the activities center to teach physical education, though it is great for that.

University wrestler Sam Brancale said the facilities were a blessing, and the wrestling room is one of the nicest in the state. He said seeing other schools’ wrestling rooms was a “little bit surprising at first.”

He said the school’s weight room would be open four days a week during Christmas break.

A walk through Eden Prairie’s hallways reveals that many of the students are University of Minnesota supporters.

Many current student-athletes said they had always wanted to play for the Gophers.

Brancale’s father wrestled at the University. From a young age he attended Gophers matches and dreamed of following his father’s footsteps.

He is now living that dream.

Nick Leddy, a defenseman with the National Hockey League’s Chicago Blackhawks, played for the Gophers for a year before turning pro.

He said his college decision was an easy one.

“I think growing up in Minnesota … you dream of being a Golden Gopher and playing for their hockey team,” he said. “I think a lot of people just want to play there and continue its rich tradition.”