After graduating more than half of last year’s starting lineup, Minnesota soccer is looking to rebuild their team chemistry on the field. 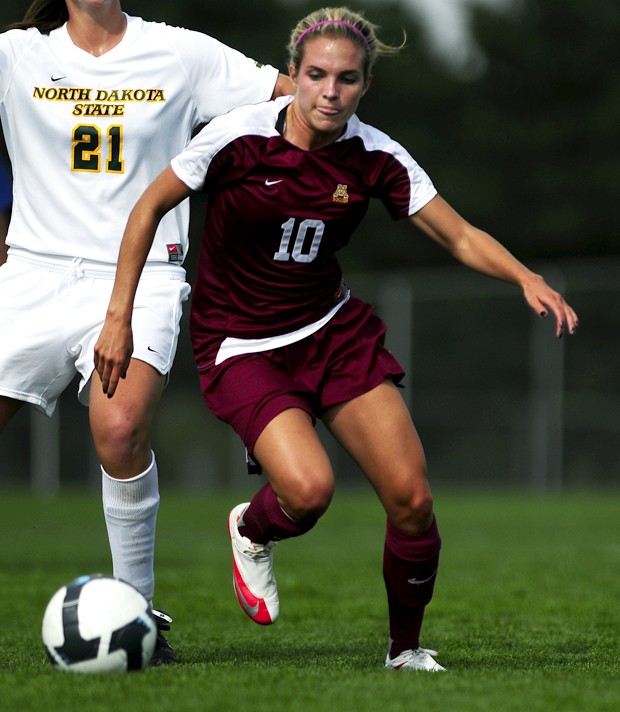 University of Minnesota, currently ranked No. 23, will have to iron out the wrinkles in the 2009 starting lineup in order to match last yearâÄôs success. The six starting seniors lead the Gophers to the 2008 Big Ten title, and the best, with 22 wins and a 0.846 winning percentage. Minnesota currently sits at 3-1-1 this season as the team works to replace more than half of last yearâÄôs lineup. âÄúItâÄôs definitely a different starting spot than it was at the beginning of last year,âÄù assistant coach Krystle Kallman said. âÄúAt times thereâÄôs a little lack of chemistry going, but thatâÄôs just something thatâÄôs going to come with playing together.âÄù Key starters who exhausted eligibility in 2008 included forward Lindsey Schwartz , midfielder Kaitlin Wagner and goalkeeper Lindsey Dare . Schwartz and Wagner lead the team with 23 and 17 points, respectively. Dare collected 73 saves and 17 shutouts in net. The 2009 squad hasnâÄôt skipped a beat defensively, with freshman goalkeeper Cat Parkhill recording seven saves and four shutouts in five games. This yearâÄôs team is trying to get a feel for each otherâÄôs tendencies and not emphasize players who have left, junior defender Kylie Kallman said. âÄúWeâÄôre still playing around with a little bit of whoâÄôs where because we have so many new players, but I think we found a good system for us,âÄù head coach Mikki Denney Wright said. With options to arrange returners at different positions, Denney Wright saw an opportunity to play with new formations early in the season. She said there are different rules for different players that will have to be sorted out as the season continues. Junior Molly Rouse , who played wing the last two seasons, has been moved to the center which will be a permanent change, Denney Wright said. Rouse has recorded two goals and two assists for six points in the first five games. Junior Julie Rezac, who Krystle Kallman said will be a versatile player for the Gophers this season, is going to move around the field based on where the team needs her against certain opponents. âÄúStill, weâÄôre only a few games in, so this is the stuff you sort out, but I think weâÄôre in a pretty good place in the midfield and the back,âÄù Denney Wright said. âÄúWe just need some duos up top to make the combination play.âÄù Strengthening the offense will depend on finding strong pairs of forwards that can connect well with each other to get in goal, she said. Freshman Marissa Price was built into the lineup as a forward for the first time during SundayâÄôs game against NDSU, where she assisted a goal for junior Katie Bethke , who currently leads the team in goals with three. Sophomore Angie Olson , who started only three games in 2008, also looks to be a consistent starter this season and has scored one goal and made one assist so far. âÄúItâÄôs interesting to watch because theyâÄôre filling shoes, but theyâÄôre filling it in with their own style and their own way,âÄù Krystle Kallman said. âÄúItâÄôs a very different soccer team than we had in the past.âÄù