Kiara Buford contributed the third double-double of her career. 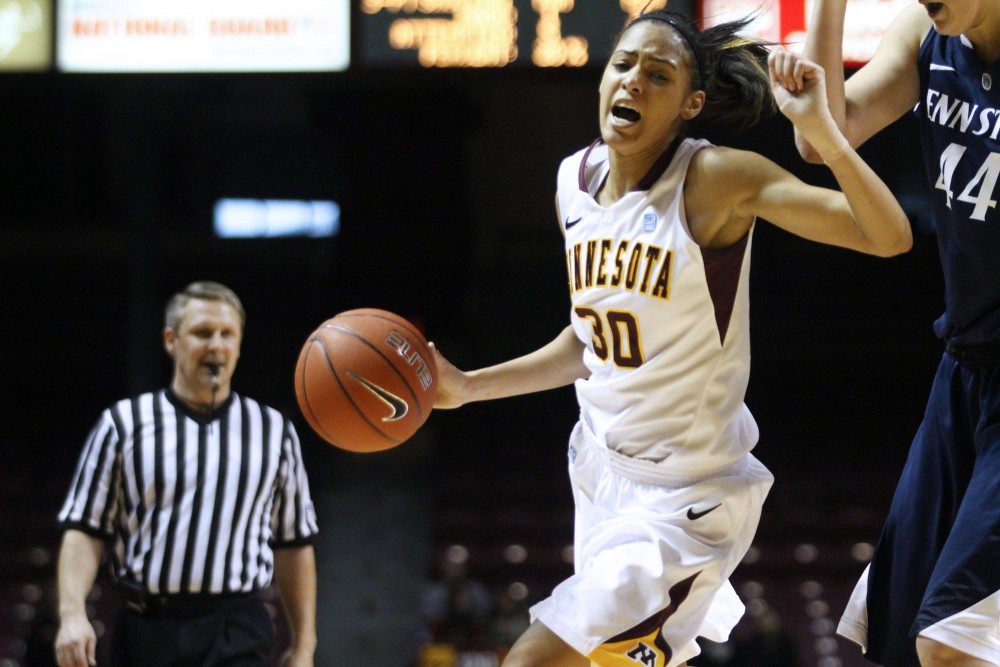 The Gophers womenâÄôs basketball team played another ranked opponent Sunday but fell short of winning on its home floor.

Minnesota fell to No. 19 Penn State 68-65 at Williams Arena despite 13 points and 10 rebounds from senior guard Kiara Buford.

Penn State (8-3 Big Ten) evened the score at 51-51 with 9:11 left in the second half after Minnesota had led comfortably for most of the game.

The Gophers (4-7) regained the lead, but after a late 3-pointer by Penn StateâÄôs Alex Bentley and two free throws by Mia Nickson, Minnesota was unable to counter.

âÄúThey made the plays down the stretch, and we didnâÄôt,âÄù head coach Pam Borton said.

Coming off a timeout from each team, Rachel Banham attempted to tie the game at 68-68 with a 3-pointer, but she air-balled it long with six seconds left.

âÄúI thought she had a great look at it and a great shot. SheâÄôs shooting 67 percent from the 3-point line in the Big Ten, and sheâÄôs the person that we wanted taking that last shot,âÄù Borton said.

BufordâÄôs double-double was the third of her career, but the senior shot just 5-for-15 from the field and had six turnovers.

Despite being second in the conference in field goal percentage, the Lady Lions struggled to connect on shots to start the game.

They began the game just 1-for-18 from the field before finishing the first half 8-of-28 shooting.

Their shooting picked up in the second half even though the Gophers were able to limit Maggie Lucas, the Nittany LionsâÄô leading scorer, to just 10 points.

Banham started slow for a second consecutive game. She scored just five points in the first 20 minutes but finished as the GophersâÄô leading scorer with 14.

MinnesotaâÄôs forwards Katie Loberg and MicaÃ«lla RichÃ© got into foul trouble early in the first half. Loberg sat for most of the half, while RichÃ© traded minutes with center Amber Dvorak, who seldom saw court time prior to Sunday.

Loberg committed her third foul less than a minute into the second half and was temporarily relegated to the bench. She sat for nearly nine minutes before returning to action.

Loberg finished with only four points and two rebounds.

In place of LobergâÄôs scoring, Minnesota received 11 points from both Kionna Kellogg  and Brianna Mastey.

The Gophers next return to action Feb. 9 in Iowa City, Iowa, for a matchup against Iowa at 7 p.m.