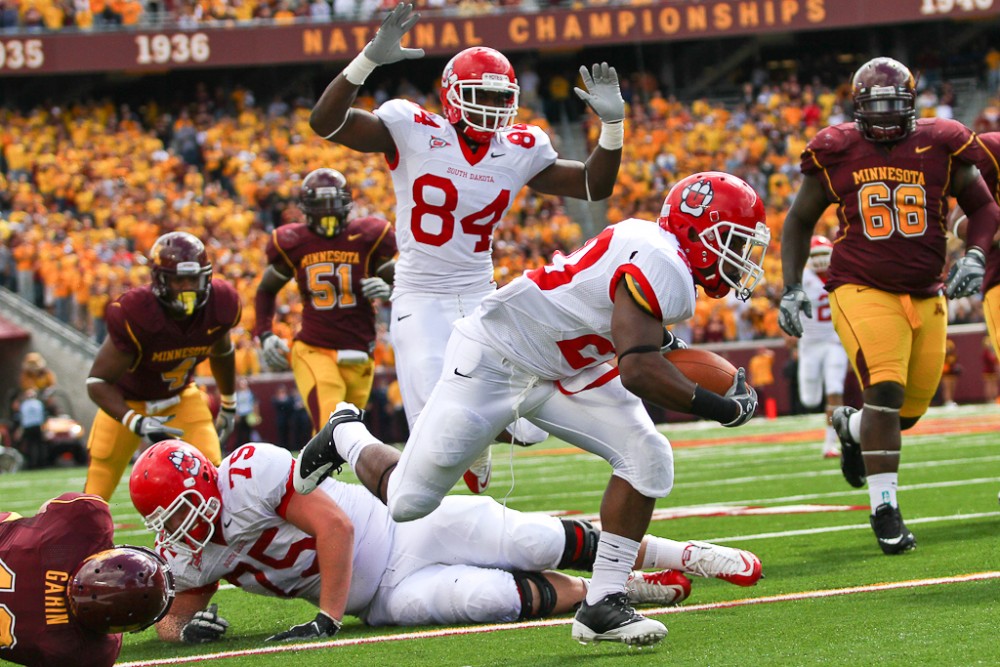 Tackling The GophersâÄô defensive line and linebackers struggled to perform this most-basic football skill in SaturdayâÄôs 41-38 loss to South Dakota. âÄúTackling is tackling,âÄù said disappointed Gophers coach Tim Brewster. âÄúTackling is something that youâÄôve done since the first time you put pads on, and we need to do a better job of tackling.âÄù The defensive miscues were most apparent in the secondary, but there was blame to go around. South Dakota found consistent success running the screen pass, and running back Chris Ganious finished with three catches for 53 yards, including a 26-yard touchdown. Multiple times, the Gophers defense failed to recognize plays at the point of attack and the Coyotes continued to strike. The defenseâÄôs only two returning regular starters both missed SaturdayâÄôs game, and their absence was apparent. Strong safety Kyle Theret continued his indefinite suspension and free safety Kim Royston was still recovering from a broken right leg suffered in April. After the game, Brewster noted the play of their replacements. âÄú[Freshman] James ManuelâÄôs got to play better. [Junior] Christyn Lewis has got to play better, and IâÄôve got to coach them better to help them more,âÄù Brewster said. The Gophers allowed seven passes of 20 yards or more on Saturday. âÄúWe can talk about the fact that weâÄôve got young guys on the defensive side, and we do,âÄù Brewster said. âÄúWeâÄôve got young guys on the defensive side; weâÄôve got inexperienced guys, but thereâÄôs no excuse toâÄ¦ have a defensive performance like we had today.âÄù Sophomore linebacker Mike Rallis, who had an interception and two tackles for loss, wasnâÄôt making any excuses either. âÄúWe didnâÄôt execute today as a unit,âÄù Rallis said. âÄúI know next time that [the defensive backs] get a chance to make a play, theyâÄôre going to make a play. Just like I missed plays today, next time I get a chance IâÄôm going to make that play.âÄù Brewster takes the blame SaturdayâÄôs loss was undoubtedly the GophersâÄô worst loss since Brewster took over in 2007. In his first season, Minnesota lost to another Football Championship Series (formerly Division I-AA) team, North Dakota State. But the Bison went 10-1 a season before that and entered the game 6-0. The Coyotes went just 5-5 last year and lost to Central Florida, 38-7, last week to start 0-1. âÄúI just didnâÄôt get the job done,âÄù Brewster said. âÄúI just didnâÄôt get the job done with our team and having them prepared to go play today against South Dakota.âÄù Brewster did not make excuses. He did not point fingers. He took the blame for the most shocking loss in recent Gophers football history. The question now becomes how the Gophers can respond after this loss. Playing Southern Cal wasnâÄôt going to be easy no matter what the Gophers did in their first two games. But with SaturdayâÄôs loss, the Gophers will have to pick themselves up before thinking of lining up against the Trojans. âÄúWeâÄôve got a lot of young, impressionable guys, and itâÄôs my job to see to it that they donâÄôt allow this loss to define them,âÄù he said. Quarterbacks connect Adam Weber looks like heâÄôs found a favorite target in sophomore MarQueis Gray. Gray again challenged Weber for his starting quarterback role this offseason, but was moved to wide receiver to take advantage of his 6-foot-4 frame. Gray finished SaturdayâÄôs game with nine catches for 91 yards and a touchdown. âÄúMarQueis is a mismatch when we go against defenses, and itâÄôs my job to find him ways to get him the ball,âÄù Weber said. âÄúAs the game progressed I think we both got comfortable.âÄù The two misfired on a few early plays, but as the game progressed, Gray was WeberâÄôs go-to receiver. DaâÄôJon McKnight had the second-most catches, with four. âÄúI was happy with all the reps that I got because itâÄôs better than last season,âÄù Gray said. âÄúI look forward to more of it in the next coming weeks.âÄù Extra pointsâÄ¦ – Fullback Jon Hoese played Saturday, just five days after his father Terry passed away. The Hoese family was on the field before the game, and the crowd honored Terry Hoese with a moment of silence. – Kicker Eric Ellestad missed a 48-yard field goal in the second quarter, his third miss in five tries this season.