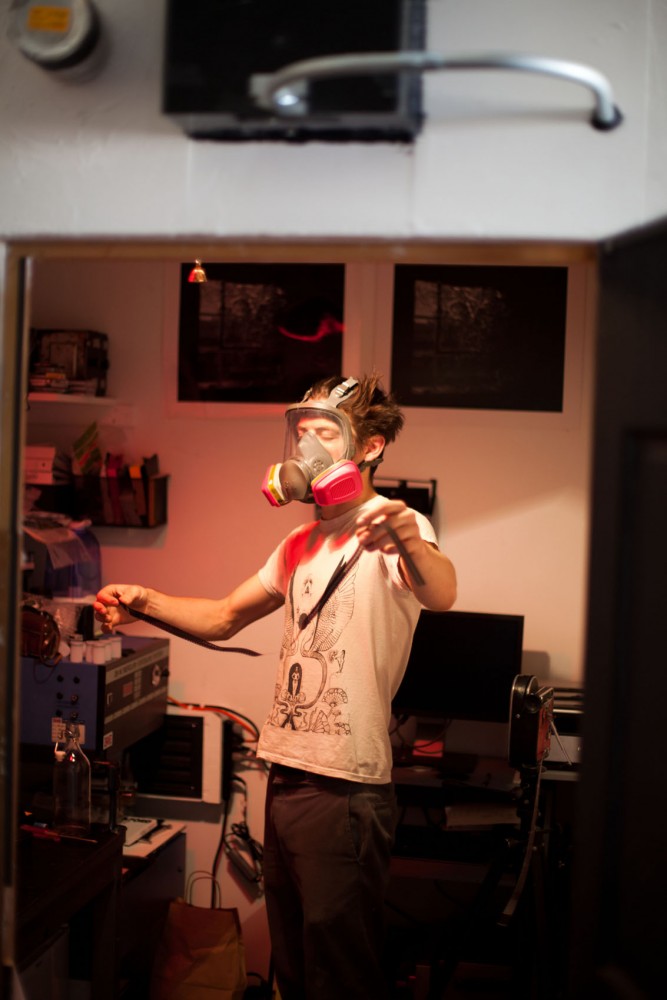 Jonathan Bruce Williams poses in his studio in downtown Minneapolis. Jonathan's first gallery show will be opening at Franklin Art Works this Friday.

The lights are dimmed. A thin but smoky haze falls upon the room. The continuous clicks and whirs of old projectors inhabit the space like the dead language of a specter summoned by sÃ©ance.

The tools of Jonathan Bruce Williams’ work are obsolete visual technologies — analog projectors and old cameras — that he uses to explore, capture and construct distinct optical effects in his unique understanding of images and their gadgetry as properties to be sculpted.

“I’m not nostalgic,” Williams said. “This technology is dead.”

In his work, the artist analyzes, deconstructs and strips down his acquisitions — among them, four Bell & Howell projectors from which two-thirds of their original parts Williams removed for his piece, “Shadow Fence.”

Williams resurrects dead technology — or at least its spirit — in his work because it’s cheap, and he can take it apart. Deconstruction is a crucial component of Williams’ practice — the means by which he can understand and manipulate the function and purpose of an object. It’s something that he’s been doing for as long as he can remember.

“I remember my parents giving me a cassette player that was transparent in an attempt to not have me take it apart,” Williams said. “It still got taken apart.”

All that destruction has really built up to something. In 2010, Williams was one of five Minnesota artists to be awarded a $10,000 Jerome Foundation grant for his innovative work with backwards technologies. He was a contributing artist to “Northern Spark” last summer, and his photography has been featured in the New York Times, yet Friday will be the first day the 26-year-old artist has officially had a solo exhibition.

“Sighthouse” is comprised primarily of three works — each of elaborate construction but elegant presentation — and dominated by its centerpiece namesake “Sighthouse;” the title of which is a linguistic play on Williams’ exploration of images and isolation.

The “Sighthouse” itself is a skeletal frame of a house complete with a lighthouse tower, capped off by a revolving platform that holds a projector — whirring gears and all — that throws a modest flickering, illuminated square across the room while the orbiting image stretches and shortens in search of a surface.

Williams’ technique of stripping down is seen in the structure of the “Sighthouse” itself, and echoed across in his piece, “Light Keeper’s Quarters,” for which his photographs were installed perpendicular to the wall and set up to face inward toward each other, like mirror images. A closer look reveals they’re not exact replicas — as a pair of small mirrors wedged together at an angle synthesize a 3-D image of a simple but quaint scene: a desk, chair and window.

The images are missing something, however. Williams has once again stripped away elements that transform what remains in their absence.

“There aren’t any drawers in the desk. There’s the window, but there’s also strings suggesting where light would be streaming in if the guy wasn’t actually just, deprived of light,” Williams said.

In his removal of inessential elements, Williams is less the meandering artist and more a disciplined engineer who works tirelessly to find elegant solutions to complex problems. The result is a tightly controlled environment — echoing the romanticized isolation of a lone light keeper — where his machines operate by their own logic and a projection’s course can be reversed.

“I’m interested in … revealing things that are invisible at first,” Williams said. “In so many ways, in our culture, the eye is a muscle that can easily atrophy.”

“When I explain something to you and you say in reaction you understand, you say ‘I see.’ It has nothing to do with seeing,” Williams said. “It has to do with understanding.”