The students were arrested in June after protesting tuition hikes at a Board of Regents meeting. 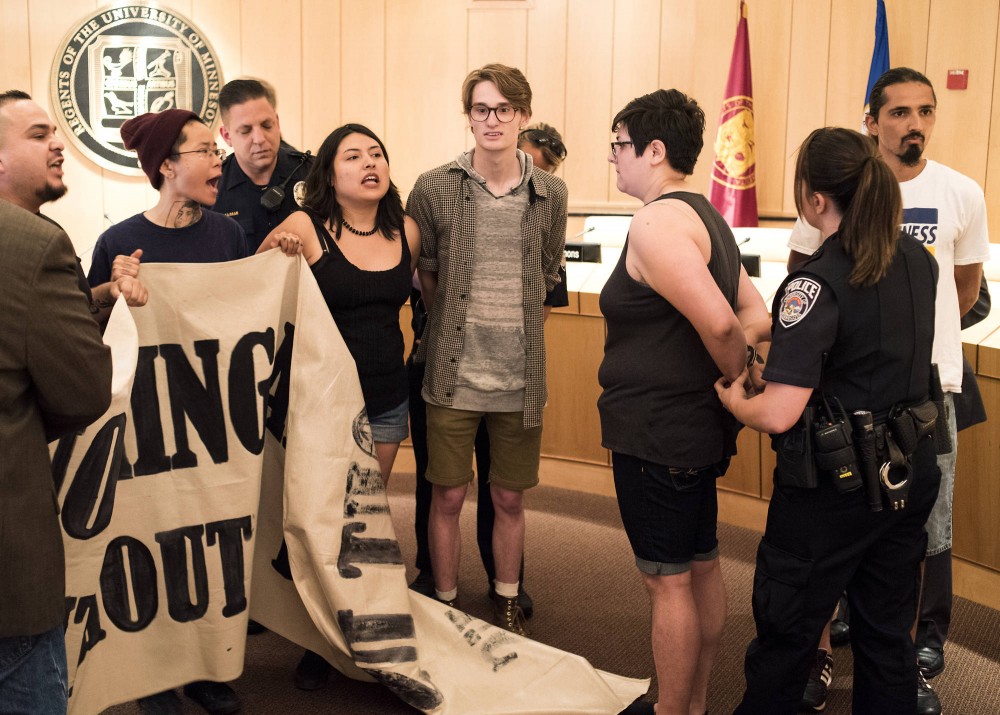 Six students are arrested by UMPD for protesting during the Board of Regents meeting in the McNamara Alumni Center on Friday, June 10. The individuals were a part of a larger group of about 30, who gathered in demonstration to voice their opposition to tuition hikes.

Criminal charges against six University of Minnesota Students arrested in June after protesting tuition hikes at a Board of Regents meeting were dropped.

The six students, who were charged with trespassing after disrupting June’s regents meeting, were scheduled to go to trial Wednesday, said Jordan Kushner, the students’ attorney. The charges were dropped because of “prosecutorial discretion,” according to documents filed by the Minneapolis City Attorney’s Office in Hennepin County District Court Tuesday.

“Everyone was happier to have the cases dropped and not have to deal with it,” Kushner said.

“There was a number of different things we did to put pressure on [the prosecutors],” Kushner said. “Any one of them could have had an effect.”

A letter signed by 241 University faculty and staff members from late last month to Minneapolis City Attorney Susan Segal urged the city to drop the charges against the students.

“While it is of course important for students to realize that their actions have consequences, it is part of their education to seek to discover the most effective means of nonviolent protest, and the spectre of a criminal record has a chilling effect far beyond what is called for in a humane, thoughtful community,” the letter read.

Alaina DeSalvo, one of the students arrested, said students organized a call-in to the City Attorney’s office on Monday to ask that the charges be dropped, and to University President Eric Kaler’s office to ask him to intervene for the students.

She said she thinks the community’s pressure and support helped influence the city’s decision.

“This is 100% the outcome we were hoping for,” DeSalvo said. “It’s very atypical for schools to allow arrests like this to get this far.”

She said the worst possible outcome of tomorrow’s now-canceled trials would have been jail time. “We were really, really nervous about that.”

The students were also charged with violating the University’s student conduct code, but those charges were dropped in October in favor of a non-disciplinary restorative justice solution, according to the letter.