Minnesota earned a comeback victory on Sunday to take the series at Purdue. 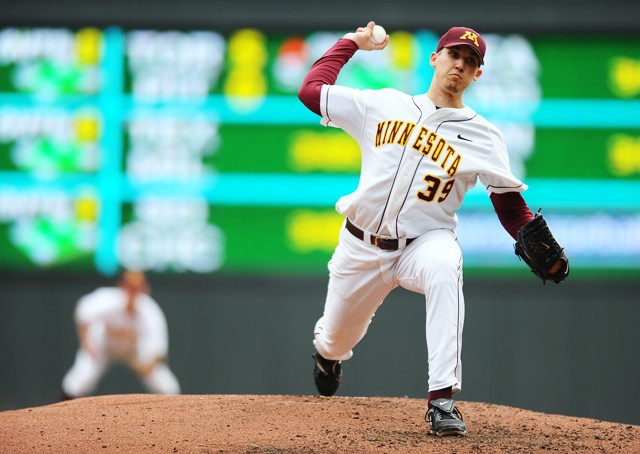 The Minnesota baseball team went into the first weekend of Big Ten play looking to reestablish itself as a winning team. After a rollercoaster series at Purdue that ended with more ups than downs, the Gophers come away winners of two of the three games, including a thrilling comeback effort in the finale. The series began with Minnesota taking a heartbreaking 3-2 loss in 10 innings on Friday. The Gophers bounced back with their best offensive game of the season on Saturday winning 14-5. Minnesota finished the weekend with a 9-7 comeback win over the Boilermakers on Sunday. âÄúIt was tough coming off that loss on Friday, but I was impressed with how we bounced back,âÄù Minnesota head coach John Anderson said. âÄúI thought we put together some good at-bats all through the lineup, and thatâÄôs reflected in how many runs we scored.âÄù The Gophers (11-17, 2-1 Big Ten) have been hindered all season by their inability to score runs consistently. Minnesota finally had the big inning offensively, scoring 10 runs in the second inning Saturday. The Gophers sent a total of 14 batters to plate as they collected nine hits. While the explosion was a top-to-bottom team effort, it was capped off by a solo home run by freshman Ryan Abrahamson , the first of his career. âÄúIt was awesome because I think we only scored 10 or 11 runs in all of March,âÄù junior Michael Kvasnicka jokingly said of the Gophers 4.74 runs per game average in March. âÄúWe were due. We had been making some adjustments in our at-bats but that wasnâÄôt showing in the score, so it was good to have things pay off for us.âÄù Kvasnicka was the Gophers lone source of run production in Game 1. He put Minnesota on the board with a solo home run in the top of the first inning and later gave the Gophers a 2-0 lead as he sent Troy Larson home with an RBI double. The other Gophers’ bats were stagnant for most the game, but they continued to hold a lead as Minnesota starter Seth Rosin delivered a solid performance. He held the Boilermakers to just one run on four hits while striking out four in 7 2/3 innings. With the Gophers leading 2-1 Purdue managed to load the bases with two outs in the bottom of the ninth inning. Closer Scott Matyas was one strike from ending the game, but Purdue’s Tyler Spillner beat out an infield single that tied the game at two. The Boilermakers then won the game in the bottom of the 10th inning as Cameron Perkins hit a walk-off RBI double off Minnesota reliever Billy Soule . The big second inning in Game 2 gave Minnesota starter TJ Oakes an early 10-0 lead to work with. Oakes showed his appreciation of the run support as he threw 5 2/3 strong innings, giving up two earned runs on seven hits. The 14 runs the Gophers scored Saturday were five more than the previous season-high. The scoring was also the result of a full-team effort as Minnesota had 10 different batters with at least one hit, nine score a run and eight collect an RBI. Minnesota once again jumped out to an early lead in Game 3 as Andy Henkemeyer delivered a two-run single in the top of the third inning. But the GophersâÄô bats went dormant in the middle innings, while Purdue fought its way back to tie the game with runs in the bottom of the second and third innings. The Boilermakers knocked Minnesota starter Phil Isaksson out of the game with three more runs in the sixth inning. Isaksson finished the day pitching 5 1/3 innings, giving up five runs on seven hits while striking out five. The Gophers came to the plate in the eighth inning trailing 5-2, but a two-run home run by Kyle Knudson , cut the lead to one. The comeback continued for Minnesota in the ninth inning as a Kvasnicka double scored two runs to take a 6-5 lead. The Gophers then scored three insurance runs as Knudson doubled home Kvasnicka and later scored on an error by PurdueâÄôs centerfielder Jon Moore. Nick OâÄôShea, who reached on the error, then scored off a Kyle Geason sacrifice fly to take a 9-5 lead. The extra runs proved to be important as Matyas gave up a two-run home run to Jonathan Lilly in the top of the ninth. But Matyas hung tight to get the last two outs to close the series win. âÄúAny time you can have positive experiences and come back and win games it adds to your confidence,âÄù Anderson said. âÄúAny time you can have that success you hope it can carry over, and the next time youâÄôre in that situation you know how to handle it.âÄù