Review: Will you marry me, Hunny? Absolutely, Hockey Dad.

Who knew a Monday night concert could be so freaking lit. 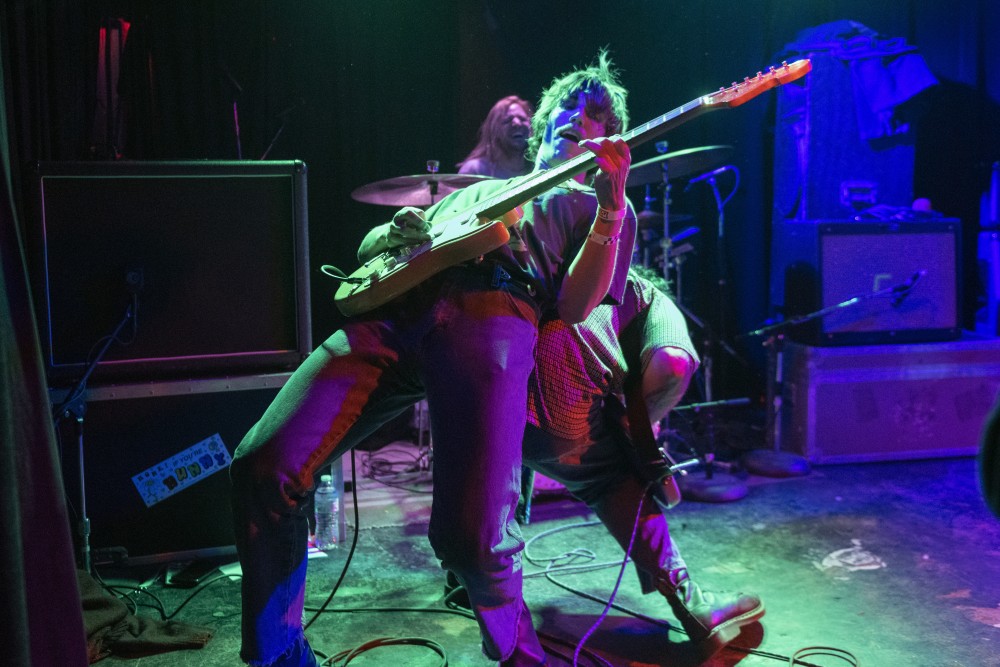 Crowdsurfing, rowdiness and … a marriage proposal. What more could a concert-goer ask for?

On Monday night, steam crept out of the small side door entrance as ripping guitar rifts floated down First Avenue. Inside the venue, Pllush warmed up the buzzing crowd.

After some straight slaps and a semi-mosh pit for the final tune, the San Fran-based band made way for their SoCal counter parts.

While the youthful crowd refueled on cool air and Nordeast, the boys of Hunny came out for the shortest soundcheck known to man. A couple strums of the guitar, a couple deep-hitting bass claps and some waving to the crowd was all it took to get the audience pressed against the shin-high stage.

With a minuscule amount of time between songs, Hunny played with an energy only attainable at garage rock shows. Spitting water off the stage and dancing around, these guys know how to party.

In fact, the band members’ outfits looking like they came from an ‘80s Goodwill was the one thing that put a damper on the night. To each their own, but cross dangle earrings … really?

It didn’t matter. Bangers like “July” and “Colder Parts” had everyone singing along; outfits became irrelevant.

“We love Minnesota. We rode that SpongeBob ride at your mall today … fucking twice!” said Yarger.

Hockey Dad came on shortly after Hunny, and the crowd was still putting out all their energy. Though they posted on their Instagram before the show to “lock up after doors close” because of the cold, drummer Billy Fleming still managed to come on stage in shorts.

Starting out with their song “Homely Feeling,” the Australian band quickly got the crowd (even more) excited. A few songs in, lead singer and guitarist Zach Stephenson advised them to “move around a little.” The audience cheered and quickly started up a mosh pit as the next song played.

Crowd surfing began midway through the show, but was unfortunately put to a quick end. Naturally, this didn’t stop the fans from screaming at the top of their lungs.

The refined sound of the duo filled the entire room and kept the crowd interested the whole night.

Playing songs both new and old (“Sweet Release,” “So Tired” and “My Stride” were favorites), the band’s garage rock sound appealed to a large variety of attendees.

Just before the final song, Stephenson announced he had to bring up two fans: Vic Silva and Allexa Johnson.

Johnson said after the show that she had no idea why her boyfriend was dragging her onstage. He grabbed the mic and told her he needed to ask a question before going down on one knee.

Discovering it was a proposal, the crowd went insane.

Johnson’s “yes” was accompanied by Hockey Dad’s cheering, adding a bit of symphonic sound to the moment. Following the engagement, the band closed the show with their biggest hit, “Seaweed.” To put it mildly, the room was not disappointed at the end of the night.

How could they be?