Minnesota knocks off pair of teams from Michigan

The Gophers beat two ranked teams in three days and improved to 18-3. 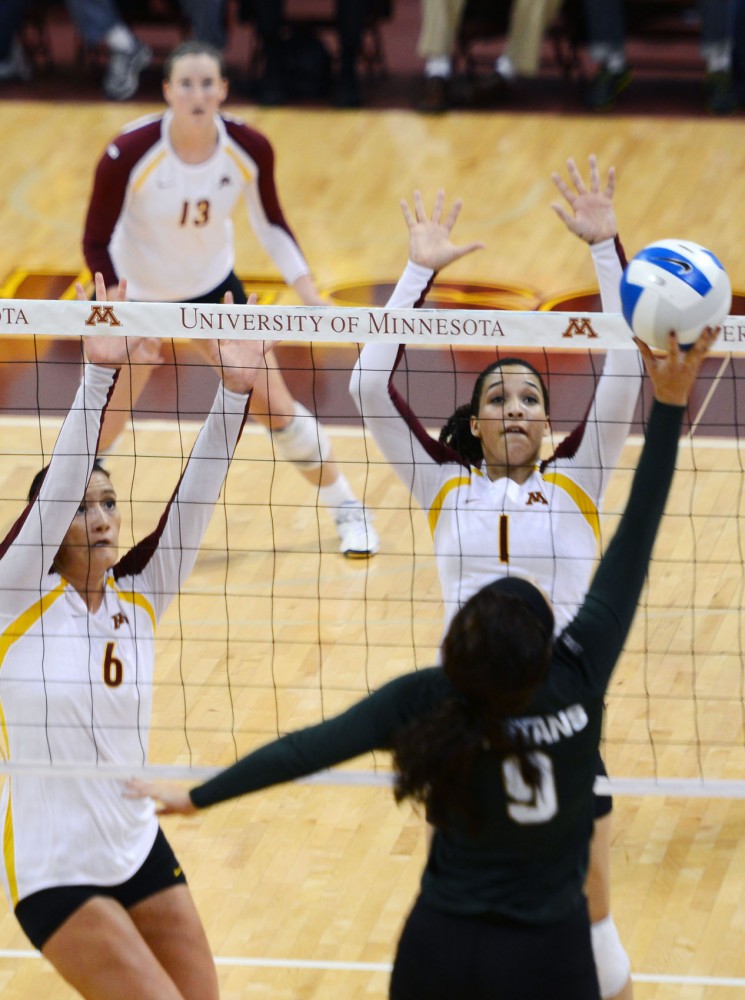 After three days and two victories, the Gophers volleyball team stands to rank a lot higher in the American Volleyball Coaches Association poll this week.

Minnesota faced two tough opponents this weekend in No. 5 Michigan State and No. 16 Michigan. In both matches, the Gophers came back from tight spots to pull out the win.

Undefeated in conference play, Michigan State rolled into Minnesota on a 15-match winning streak before the Gophers ended it Thursday night.

But the win didn’t come easy for Minnesota.

After going down two sets to one, including losing a close third set, the Gophers were able to bounce back and win the fourth set to force a decisive fifth and final set.

The Gophers made sure the fifth set went smoothly, crushing the Spartans 15-7.

“We’re starting to get a little bit of grit, and that’s important [because] we’re not out of the woods yet,” head coach Hugh McCutcheon said. “I think we’re starting to have some belief in this team about what we are capable of doing.”

Sophomore outside hitter Daly Santana played big for the Gophers, tallying 11 kills, 16 digs and seven aces in the match.

“I just went out there and was like, ‘OK. Just do what you do in practice. Just breathe and go for it,’” she said.

Santana continued her impressive performance in Saturday night’s match. But the Gophers looked shaky at first.

Michigan looked more energized and better defensively as they took set one 25-15.

Showing the same grit and determination that McCutcheon spoke of, the Gophers fought back and won three straight sets to send Michigan packing.

“I think, kind of emotionally, we were expecting to start right where we left off on Thursday, and Michigan made sure that didn’t happen. They had a plan and executed well,” McCutcheon said. “We were able to make some adjustments, make some changes, and we played better.”

One of those adjustments was replacing struggling libero Morgan Bohl with sophomore Lindsey Lawmaster.

Lawmaster went on to have a great match with a team-high 17 digs.

The Gophers played in front of two packed crowds this weekend, something the players and coaches appreciated.

“To have that much support in a community you live in, it’s just unbelievable,” Lawmaster said.

The Gophers will next play Wisconsin on the road Wednesday.