Many stores moved their openings up to midnight for Black Friday, and some violent incidents erupted around the country. 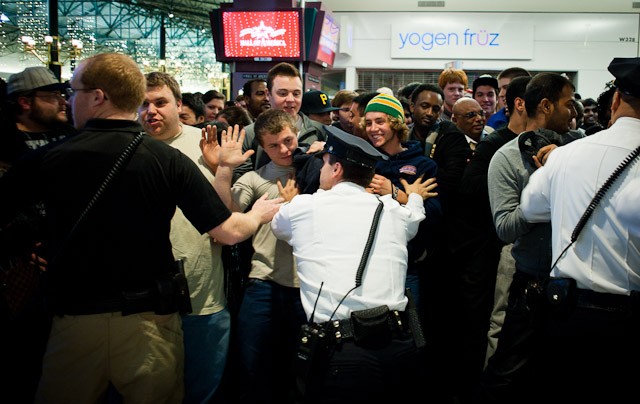 Shoppers attempt to push through security staff just after midnight Friday outside of Best Buy at the Mall of America.

For Laurel Anderson, Thursday night came with little sleep, as she and five friends waited for Mall of AmericaâÄôs midnight opening.

Shoppers from all over lined up at the mall waiting for deals like GapâÄôs midnight-to-noon 30-percent-off deal, gift cards for the first 100 shoppers at H&M and 20 to 60 percent off at MacyâÄôs.

Anderson, who showed up at 10 p.m., said she planned to stay until 9 a.m. before heading back to her parentsâÄô house in Eagan, Minn. She was just one of many with big shopping plans at the nationâÄôs largest mall.

MOA security guards subdued eager shoppers as they waited to rush into stores and take advantage of sales. About 15,000 shoppers showed up for the mallâÄôs midnight opening, and with more than 100 stores including MacyâÄôs and Best Buy opening earlier than ever this year, the number grew as the night progressed.

It was the most ever spent on the day that marks the beginning of the holiday shopping season, and the biggest year-to-year increase since 2007.

Online shopping was strong as well, with a 24.3 percent increase in online spending, according to IBM, which tracks sales at 500 online retailers.

While MOA saw little drama, other stores around the U.S., including many Walmarts, saw violent displays of Black Friday frenzy. But any violence or protest against the extreme consumerism, paled in comparison to the wave of deal-seeking consumers.

In Los Angeles, authorities said a woman shot pepper spray to keep shoppers from merchandise she wanted during a Black Friday sale, giving 20 people minor injuries. In central Florida, a man is behind bars after a fight broke out at a jewelry counter.

In Oregon, police responded to three separate reports of fighting at a Walmart on Thursday night. One officer told The Blade newspaper that one of the fights was over towels selling for $1.88. In Florence, Ala., a shopper was subdued with a stun gun at a Walmart store as shoppers gathered for sales.

Amy Brennan, a University of Minnesota-Duluth student, came to the Mall of America without a shopping list but planned to check out every big deal offered for clothes, holiday gifts and boots. She said she would drive back to her home in Chanhassen, Minn., around 6 a.m. to catch up on sleep.