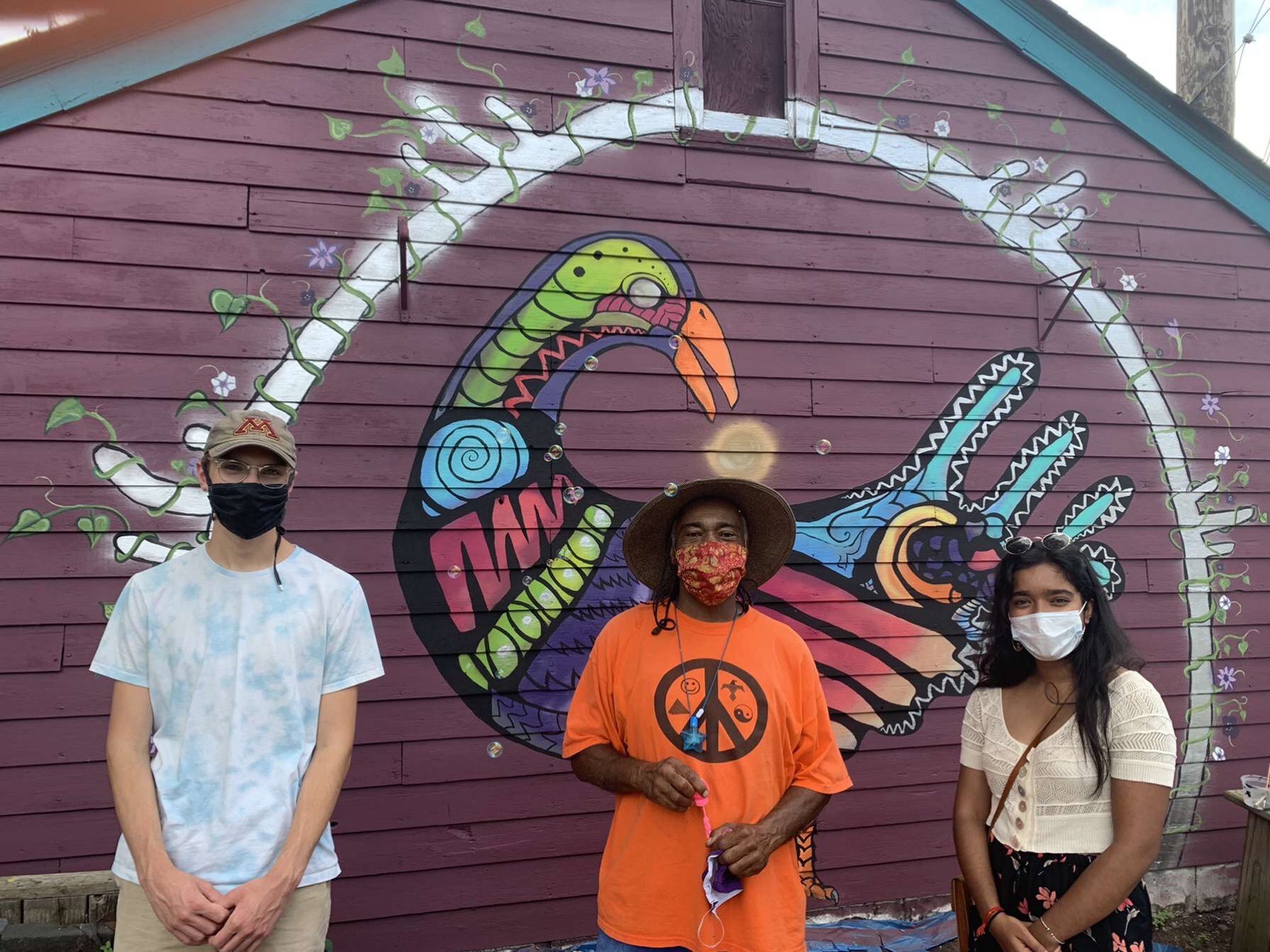 Robert Glisky, Melvin Giles and Sneha Sinha stand in front of a mural in the Peace Garden in the St. Anthony neighborhood of St. Paul. (Photo courtesy of Engineers Without Borders)

For some St. Paul neighborhoods, hope is starting to grow after the police killing of George Floyd.

Recent unrest left several neighborhoods in Minneapolis and St. Paul as food deserts when grocery stores were destroyed. Now, the University of Minnesota student group Engineers Without Borders is teaming up with the Urban Farm and Garden Alliance to transform its Peace Garden in St. Paul into a produce plot.

EWB is currently accepting financial contributions for the food donation site established by UFGA in the garden. Next, they are planning on applying for grants to build handicap-accessible permeable pathways throughout the garden that keep water from running off. They also hope to build a greenhouse where UFGA can continue its educational programming for children this upcoming school year.

EWB’s members work in different groups that create engineering solutions specific to the communities where they work. The Ethiopia Project Team normally creates water irrigation solutions in different Ethiopian communities. The group partnered with UFGA before the uprisings, but it is addressing immediate needs and creating a long-term watering solution for the local garden.

“UFGA is a really cool organization, and we’re really excited to be partnered with them,” said Sneha Sinha said, the engineering group’s senior project lead.

UFGA is a network of eight to 10 community gardens in predominantly Black neighborhoods in the Twin Cities that promote reconciliation, social justice and environmental justice through sharing food. Melvin Giles and his brother started the project about 15 years ago, and the organization now hosts workshops, community meals and regular community reconciliation events.

Maricella Xiong works with UFGA and said wealth is more than how much money a community may have – wealth can be knowing how to grow strawberries and when to plant squashes.

“I would describe it as building generational wealth and seeing the wealth in the community beyond money,” Xiong said. “Seeing wealth in knowing how food is grown.” Megan Phinney also works with UFGA and said the project started smaller and has been built up considerably since its founding. She described how UFGA cultivated relationships with community members in the Rondo and Frogtown neighborhoods, as well as describing some of the success stories of different gardens throughout the group’s history.

“I think we bring a sense of hope. We acknowledge the reality of racism and how to make a positive change,” Giles added.

Lindsay Schwantes with the local government office Capitol Region Watershed District said projects funded by Stewardship Grants are evaluated based on how much water they keep out of storm drains and from flowing into the Mississippi River. The more impact a project has, the more funding it may receive.

EWB follows specific processes to design and implement projects – including the proposed produce plot – such as having all designs reviewed by the Community Engineering Corps, said Nate Twardock, the junior project lead  said. While the projects are normally executed overseas, the team will work throughout the upcoming year to accomplish its goals at home.

“We’ll be working on designs in the fall and implementation is the spring,” Twardock said.

After EWB completes its project, UFGA will use the repurposed Peace Garden to continue to serve the community’s needs physically and mentally.

“I see it as liberation work of really healing the community through relationships,” Xiong said. “We are grounding ourselves physically.”