Jug bands have experienced a mini-revival. 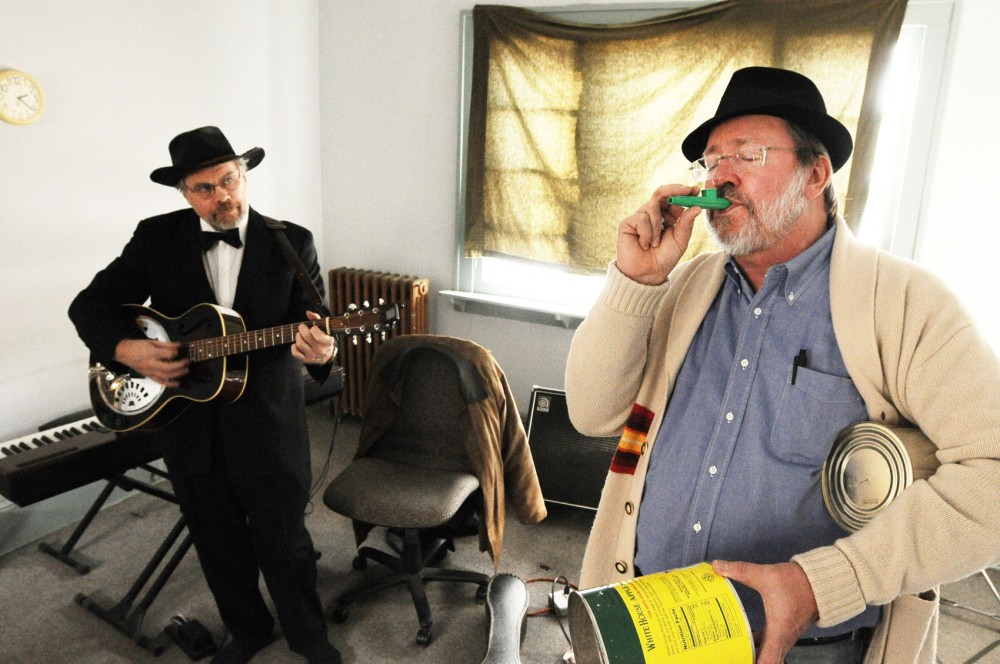 Michael Kennedy and Mark Richardson of the West Bank Jug Sluggers rehearse together at the West Bank School of Music on Saturday, Feb. 2, 2013, in Minneapolis. The band will be playing the 31st Annual Battle of the Jug Bands on Feb. 10 at the Cabooze.

What: 31st Annual Battle of the Jug Bands

The notion that jug bands are a manifestation of hillbillies-run-rampant is a misguided one. The jug trend of ’20s and ’30s fame was originally an urban, not rural, display with well-dressed members in suits.

The idea of odd or homemade instrumentation in popular music did not die with the end of the fad though. The British picked up the skiffle trend — simply folk and blues music involving some form of improvised contraptions.

Fast-forward to the present, and jug bands have experienced a sort of mini-revival, seen locally in the annual Battle of the Jug Bands.

“I love jug band music because it’s such happy music, feel-good music,” said Josh Wise, one of the event’s organizers and jug player for The Peoples’ Revolutionary Jug Band. “It really harnesses that do-it-yourself spirit — it’s not about using the greatest technology, it’s about doing what you can do on your own.”

One legend surrounding early origins of the competition comes from the ’60s, when the first incarnation supposedly ended with all of the participants in the nude.

The more commonly accepted history is that it began at Palmer’s Bar.

Dave Alderson, executive director of the West Bank School of Music, which will receive some of the event’s proceeds, embodies the particular energy surrounding this brand of folksy ambition and performance.

In a rehearsal for The West Bank Jug Sluggers, Alderson was animated and engaging for a whopping audience of two.

This slightly goofy aspect of jugs is only heightened by its frequent accompaniments on stage: the kazoo, washtub bass, canjo and all manner of jury-rigged percussion. These are in addition to guitars, mandolins, fiddles and the more typical trappings of folk and blues music.

The jugs can be anything, from Alderson’s brewpub growler to Davis’ first empty Carlo Rossi bottle. All you need is a desire to blow and have fun in a low-pressure
environment.

“I played trombone, and I also run a lot,” Davis said. “I have the lung capacity.”

It is a phenomenon that embodies that early-American, we-can-do-anything attitude — not to mention entertaining music of unusual proportions.