Minneapolis’ newest thrash-metal quartet will be throwing a vinyl release show at the Triple Rock this Saturday. 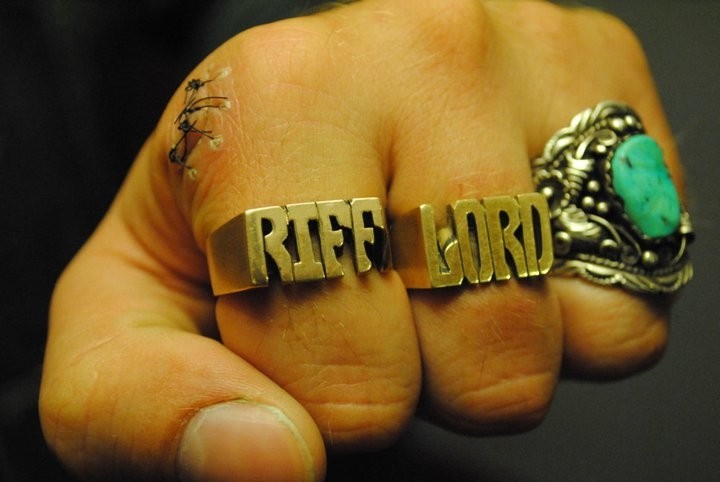 If Josh Homme, Tony Iommi and Lemmy were all capable of keeping their egos from getting the best of them for a few hours and split a record, the result would end up sounding something like local thrash metal group Rifflord.

The South Dakota natives are the newest addition to the scene, and their vinyl release show at the Triple Rock this Saturday is sure to be anything but a quiet introduction.

RifflordâÄôs album âÄú26 Mean and HeavyâÄù is a visceral mess of meaty guitar riffs, manic organs and throat-shredding vocals thatâÄôs so uncompromising, so in-your-face, that it will either enthrall or completely alienate its audiences. ItâÄôs early Queens of the Stone Age meets the thrasher heyday of Motorhead, and the recently relocated quartet wastes no time on apologies in the course of it.

Originally formed in Sioux Falls, S.D. by vocalist/guitarist Wyatt Bartlett and guitarist Tom Davoux, the band paid their dues playing shows in South Dakota after opening for doom-metal outfit The Sword at their first gig. Today, RifflordâÄôs members are scattered throughout the Midwest with two of the bandmates now living in Minneapolis.

Davoux said the move was part of a concerted effort to escape a scene that had just become too limited and restricted for a band in pursuit of more exposure and a broader audience.

âÄúThat town used to have a really awesome music scene. Lots of good bands came out of Sioux Falls âÄ¦ lots of important bands. Lots of those bands broke up, lots of those people moved away,âÄù Davoux said. âÄúTouring bands will come through and play the next day in Minneapolis and sell out the Triple Rock. But theyâÄôll come to Sioux Falls and be lucky to get 25 people there.âÄù

And itâÄôs a logical step because a band with such an abrasive edge needs plenty of space to breathe. The song âÄúOlde Fashion Black MagikâÄù is a fuzzed-out onslaught of blister and bluster that falls somewhere between heavily distorted blues and droning sludge rock, while âÄúChildren of the Electric CurrencyâÄù channels the breakneck speed metal of SlayerâÄôs âÄúReign in Blood.âÄù

A band that boasts such a colossal sound is bound to deliver an engaging live show. ItâÄôs a quality that Davoux said Rifflord strives for in their performances.

Employing two 6âÄùx12âÄù homemade cabinets between the two guitarists, the band wonâÄôt have much of a problem replicating the wall of sound produced on their record.

Given MinneapolisâÄô dearth of respectable hard-rock acts, itâÄôs hard to say where Rifflord will fit in. But DavouxâÄôs less wary, and while the bandâÄôs performed only twice in the city, he said the response was plenty reassuring.