More than 400 students from across the state rallied in front of the Capitol Wednesday. 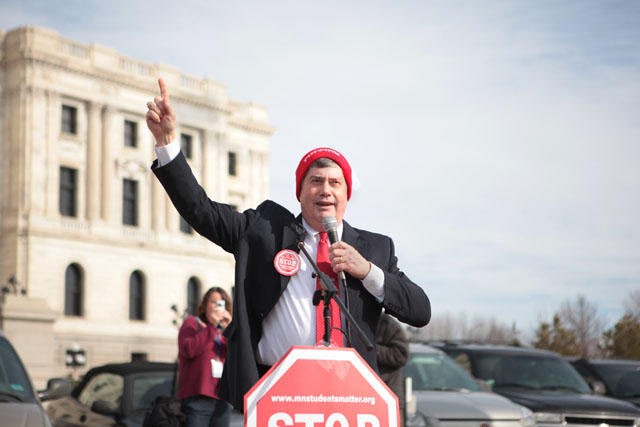 University of Minnesota students and faculty testified Wednesday at a state Senate committee hearing for a bill that would temporarily freeze tuition and permanently limit increases.
Each asked legislators to support higher education but, one by one, said they opposed the bill âÄî just hours after hundreds rallied outside the Capitol in favor of the proposal.
The bill, heard in the Senate Higher Education Committee, would freeze tuition at the University and Minnesota State Colleges and Universities until 2013, and permanently keep tuition increases proportional to inflation.
Both education systems are preparing for tens of millions in state funding cuts as legislators try to fix the stateâÄôs $6.2 billion budget deficit. But stakeholders are concerned a tuition cap will lower the quality of education provided.
University President Bob Bruininks called freezing tuition and cutting state appropriations a âÄúdouble-whammy.âÄù
Before the hearing, Sen. John Carlson, R-Bemidji, who co-authored the bill with Sen. Michelle Fischbach, R-Paynesville, said he hoped the bill would start rigorous debate about the cost of college.
âÄúPrimarily, we want to make sure these budgets arenâÄôt balanced on the backs of students,âÄù he said. âÄúWe want the administration looking inward to redesign services to cut spending.âÄù
Minnesota Student Association leaders commended the senatorâÄôs consideration of student interests but said ultimately, for students, âÄúitâÄôs a bad bill.âÄù
âÄúItâÄôs a matter of burning the candle at both ends,âÄù said Christopher Tastad, director of the Legislative Certificate Program, an MSA offshoot that trains students to be advocates at the Capitol.
Thomas Trehus, MSAâÄôs political director, said the idea of a tuition cap sounds great but could be damaging in the long run.
Over the next two years, more state funding cuts plus a tuition freeze could force the University to use private donations for internal costs rather than student scholarships, he said.
The next step could be faculty cuts leading to larger class sizes, Trehus said.
Jonathan Schmidt, an economics student at the University and an MSA member, testified that a tuition cap might cut into advising programs, facilities upkeep and student services like the career center.
Debate began a few hours before the hearing Wednesday morning, when more than 400 students from across the state rallied in front of the Capitol, wearing red hats and holding signs reading âÄúS.T.O.P âÄìâÄì student tuition is overpriced.âÄù
Carlson also wore a cap and spoke at the rally.
The rally was planned by the Minnesota State College Student Association two months before the tuition freeze bill was scheduled to be heard.
Since students traveled in from across the state, they also planned to meet with legislators and attend the hearing, said Shannah Mulvihill, interim executive director for MSCSA.
All seats were filled during the hearing, and some students sat on the floor.
At several points, senators asked those testifying to clarify whether they supported the bill.
University of Minnesota faculty members answered that they supported whatever position University administration and the Board of Regents took.
No member of the University administration testified.
MSCSA Chairman Andrew Spade, who, hours earlier, led red-capped rally participants outside the Capitol, expressed the associationâÄôs straightforward opinion.
âÄúStudents want to be part of the budget solution, but we are unwilling to be the budget solution.âÄù
The bill was laid over to the Committee on Higher Education for further consideration.