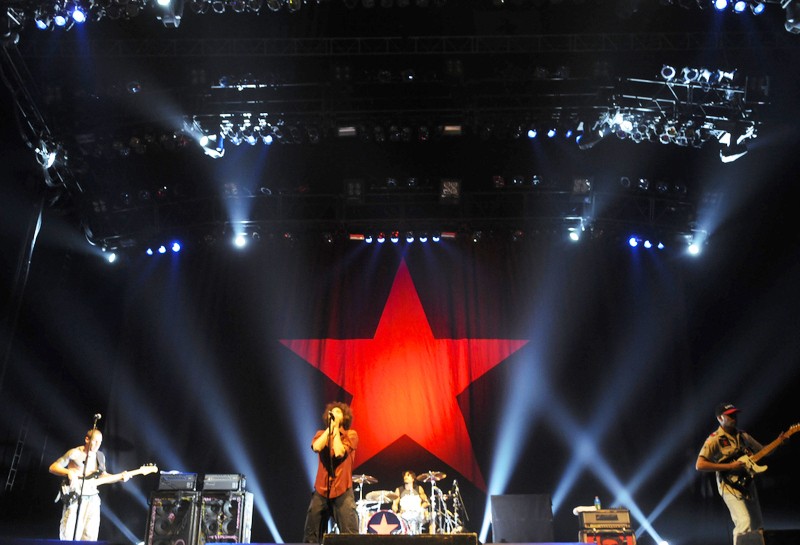 Rage Against the Machine Sept. 3, The Target Center. Rage Against The Machine is the most perfectly named band in the history of the universe. ItâÄôs true; it is almost a physical law. Their name exists in the same way that gravity does. Their name is pi. I know what you are all thinking: Engelbert Humperdinck is the most perfectly named musician of all time, and I agree that his name is delightfully hilarious, but Rage Against the Machine lives and breathes their name. They represent the terrified, angry and instinctual feeling in the pit of your stomach, a certain anger at a certain establishment. The Rage Against the Machine concert on Sept. 3 kicked me so hard in the face that I will never recover. My ears have heard perfection, and it is loud. Arriving at the Target Center just after the opening act finished, I was immediately confronted by the staggering amount of police within a six-block radius of the venue. Cops in full riot gear were wearing tear gas and pepper-spray canisters like war medals. They were haunting every street corner in groups of six and seven, armed with clubs the size of table legs and threatening rubber bullets at no one and everyone in particular. The air was heavier than Bristol PalinâÄôs womb. I convinced a hesitant bartender to keep my bag until after the show, assuring him it was not a bomb. People seemed nervous. The Target Center was serving as a crucible and MinneapolisâÄô boys in blue, perhaps in envy of St. Paul policeâÄôs iron-fisted response to RNC protests, figured this was their time to shine. Once inside the Target Center, the feeling was a polar opposite. It was euphoric; people were ecstatic and the energy in the air was overwhelming. Rage Against the Machine came onstage clad in the attire of Guantanamo Bay detainees, and the show began like an explosion of white-hot light. The band was immediately on their mark; they were emotive, fluent, articulate and powerful. They played every song the crowd wanted and said everything they needed. I looked at a woman standing next to me and she was openly weeping. I patted her on the back and we sang along together. The band played a lengthy set and then returned for a solid encore. Zack De La Rocha spoke one final time, advocating peaceful resistance and protest. And The Rage show was over. Thousands of patrons emptied out into the street. Then came the moment of truth. Any fans that had entertained the idea of a post-concert violent uprising had been instructed by the mother ship not to strike first. De La Rocha explicitly stated more than once during the night to remain peaceful, and the crowd complied. The police, undoubtedly predicting that the end of the show would serve as the catalyst for the rebellion they were there to smother, grinned with anticipation. Everyone was waiting, and nothing happened. It is true that a handful of protesters were present out of defiance to the authoritative nature of the police, and their numbers were effective, but it seemed like most of the concertgoers stayed because the police stayed, because the media stayed. It was a spectacle; everyone was there to see what would transpire. The police were there because the people were there, but the people wouldnâÄôt go home because there were so many police. The cops began sweeping the streets up and down and the concertgoers simply moved to the side to gawk like country bumpkins at a military parade. The police seemed frustrated; they didnâÄôt know how to handle this strange situation, so they simply continued sweeping. Eventually, everyone got bored and went home. I left half-deaf and holding my face to try to keep it from melting off. At some location, unbeknownst to me, the cops confronted a group of disappeared protesters and 102 were arrested. The world cringed a little bit, and the Minneapolis Police DepartmentâÄôs thirst was quenched until the next full moon.