School officials are in the process of seeking donors for new athletic buildings. 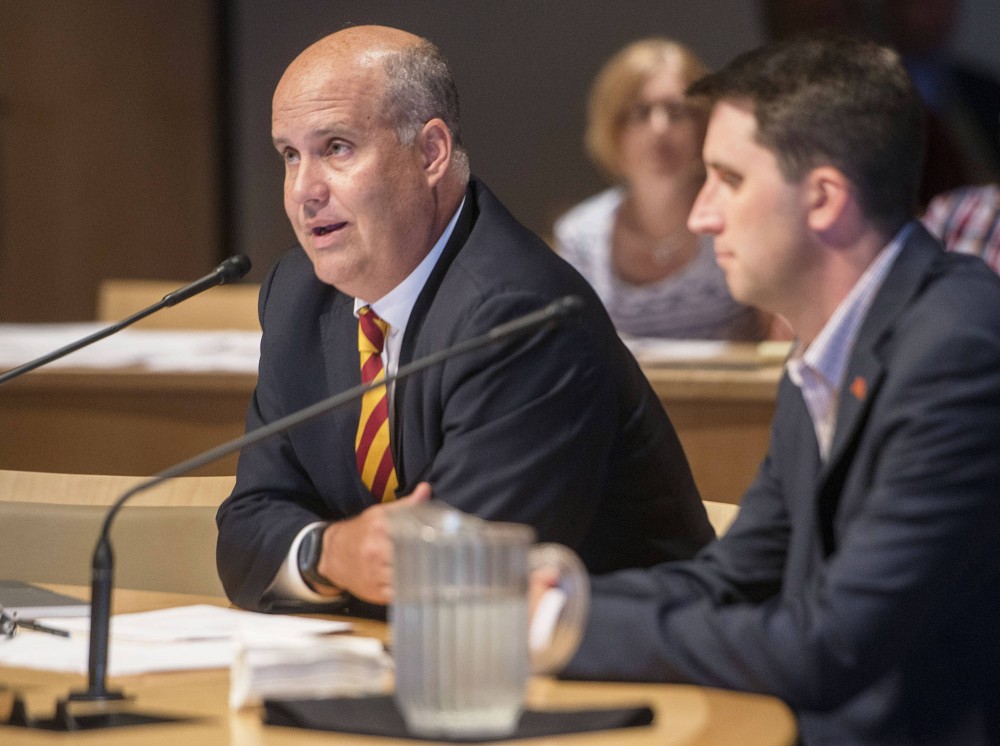 A national discussion to boost scholarships for student-athletes has reached the University of Minnesota, and school officials say the looming changes could bring a competitive advantage, despite the added departmental costs.

In a presentation to the Board of Regents on July 9, athletics director Norwood Teague and the University General Counsel William Donohue described potential changes to student-athlete compensation, but specific details surrounding the new policies weren’t clear.

“There is a not-zero risk of dramatic change in college athletics,” President Eric Kaler said at the meeting.

Donohue said if an August vote grants independent decision-making authority to a collection of five NCAA Division I conferences, which includes the Big Ten, changes at the University seem likely. The autonomy, he said, would allow these five conferences, known as the Big Five, to make their own judgments on specific issues, like increasing aid for student-athletes and covering parents’ travel expenses when they come to campus for recruitment visits.

Division I authorities have ruled against changes like these in the past, Donohue said, but Big Five conferences aim to sidestep those decisions by becoming independent.

The push is part of a response to debates over the portion of athletics revenue students receive, Donohue said.

He said increasing benefits for student-athletes would increase costs for athletic departments, but he also said it would give Big Five members “a little bit of a competitive advantage” over other Division I institutions.

For example, Donohue said the University’s full scholarship for student-athletes falls $1,600 short of the entire cost of attendance, but the school could likely provide that money if the proposed autonomy is approved.

Besides potential scholarship boosts, new facilities are on the horizon for University student-athletes.

In the presentation to the Board of Regents, Teague outlined plans to launch the next phase of the campaign to raise nearly $200 million for new training facilities and upgrades — an effort designed to make up for lost ground among other Big Ten institutions’ newer and bigger amenities.

Teague first introduced the plan, which will add on and build new facilities near Bierman Field Athletic Building, last July. The University has been gauging interest from donors since then, and school officials hope to start the next phase by the end of the summer.

Part of the motivation for the $190 million fundraiser is to make the University’s athletics facilities more comparable to those at peer institutions.

“We are lagging behind our peers in this area,” Teague said at the board meeting, “and we’ve got to get caught up.”

At the board meeting, officials compared the Gibson-Nagurski Football Complex, the University’s football training facility — which is shared with eight other sports teams and was built in 1985 — to a University of Iowa training center that will be completed this year. Iowa’s new building is reserved solely for football players and is more than 100,000 square feet larger than the University’s.

“We’ve got some catch-up to do,” said Dan O’Brien, senior associate athletics director for Gophers football.

The plan highlights a basketball practice facility, which former men’s basketball coach Tubby Smith had identified as a need upon his arrival in 2007.

The department is fairly confident it will be able to raise the entire amount, Teague said at the board meeting.

He said a feasibility study that officials completed in February showed corporations and private parties are interested in donating, but there aren’t many willing to donate more than seven figures.

Although Chris Werle, Minnesota’s senior associate athletics director for strategic communications, said there still isn’t a specific timeline for the project, Teague said at the meeting that he hopes the entire process will be shorter than the six- to eight-year time span he originally announced last July.

In what officials have referred to as a “facilities arms race,” bigger and better amenities are being used as a recruitment tool for student-athletes across the country.

“That first impression is very important,” said Steve Roe, a spokesman for the University of Iowa’s athletics department.

But he said recruitment isn’t the only motivation for the project.

“We want to do it for our existing student-athletes as well,” he said.