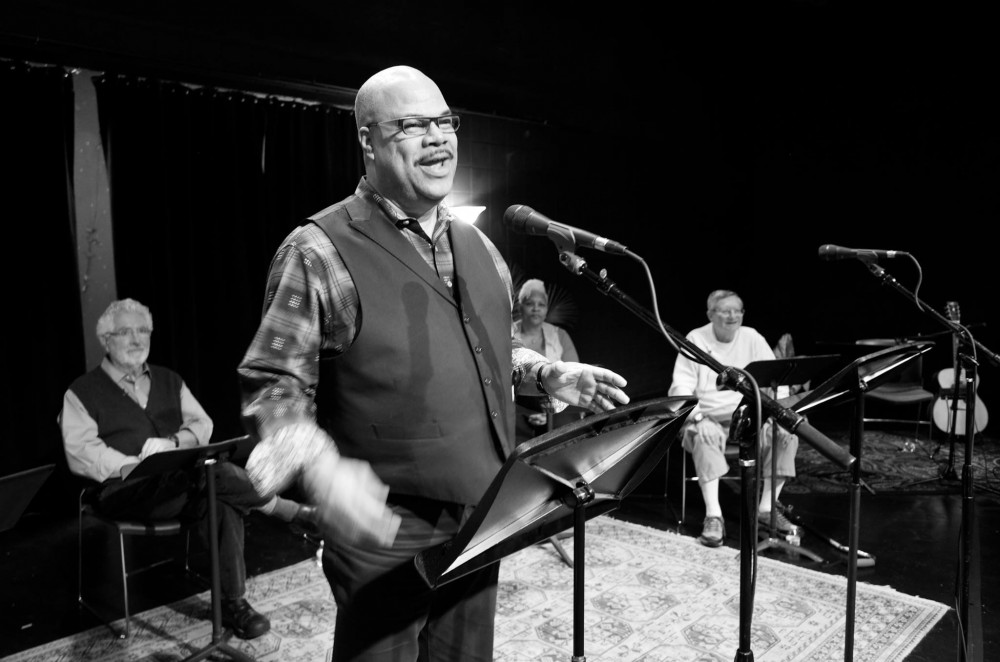 Actor T Mychal Rambo speaks during a performance of Hippocrates Cafe in January 2017.

Even throughout medical school and his work as a physician, Dr. Jon Hallberg, a professor of family medicine at the University of Minnesota, never let go of his interest in the arts.

After working with performing artist patients and serving as a medical commentator for Minnesota Public Radio, Hallberg found a way to combine his two specialties: Hippocrates Cafe, a performance series dedicated to discussing individual health care topics through storytelling and song.

“The show concept came together about nine years ago. My clinical had this empty space. … And the light bulb went off,” Hallberg said. “It would be an inspired-by-radio show that talks about healthcare topics through music and story.”

Over the years, Hippocrates Cafe has covered cancer, aging and, last Wednesday, the heart. Instead of telling longer narratives, Hallberg fills the hour-long performances with multiple short pieces laced together with brief musical interludes.

“I just like the way it comes together when there are a lot of little pieces. … It lends itself to shorter attention spans, but it’s also, in its own way, a little zen-like,” Hallberg said. “It’s also got this slow, calming pace to it. It’s a little more artful and highly intentional.”

For actors and musicians working on Hippocrates Cafe, examining the intersection of the arts and healthcare is a welcome opportunity.

“I have, for a long time, been interested in … the crossover between the arts and healing,” said Candace Barrett Birk, a local actor. “It emerged pretty quickly that there was something in story … and healing stories … I didn’t have the background to know how to develop it from the medical side, so it has really been a gift for me to be able to work with him.”

Accordionist Dan Newton frequently collaborates with Hallberg to produce the music for Hippocrates Cafe performances. Hallberg searches through poetry, newspaper articles, fiction and other stories to find the material that the music, both composed and original, will complement.

“The scope of the material is immense, and I always learn something from one of these shows,” Newton said. “It also gives me just as wide of a scope of music to draw on. … To find [music] that relates to pieces that are read and are only maybe 15 seconds long or sometimes five to ten minutes … is a challenge.”

Hippocrates Cafe is performed for a variety of audiences, and the most powerful experiences for the performers are often for crowds who are not expecting to be moved by health care discussions.

“One time, we did an early morning performance for a convention of medical school administrators,” Newton said. “We were the first official event of their conference, and it came at a spot where they usually would have somebody do a PowerPoint presentation. … By the time we were done, they were jumping out of their seats and applauding. … [Hippocrates Cafe] woke them up so much better than another PowerPoint.”

However, in more intimate performance settings, the impact Hippocrates Cafe has is more direct — by breaking down health topics that can be intimidating, the performance series can make direct connections with audience members.

“As performers, we have to slow down to deliver the material … and I think there’s something about that kind of communication that we just don’t get very much anymore,” Birk said. “It’s incredibly important for just being human, certainly for creating community and for expanding our knowledge of the world … I think that happens in this material. It’s created by [Hallberg] with such intelligence and knowledge and also extraordinary care and love.”