The Gophers dropped their third straight game, fall to 1-3 in the Big Ten. 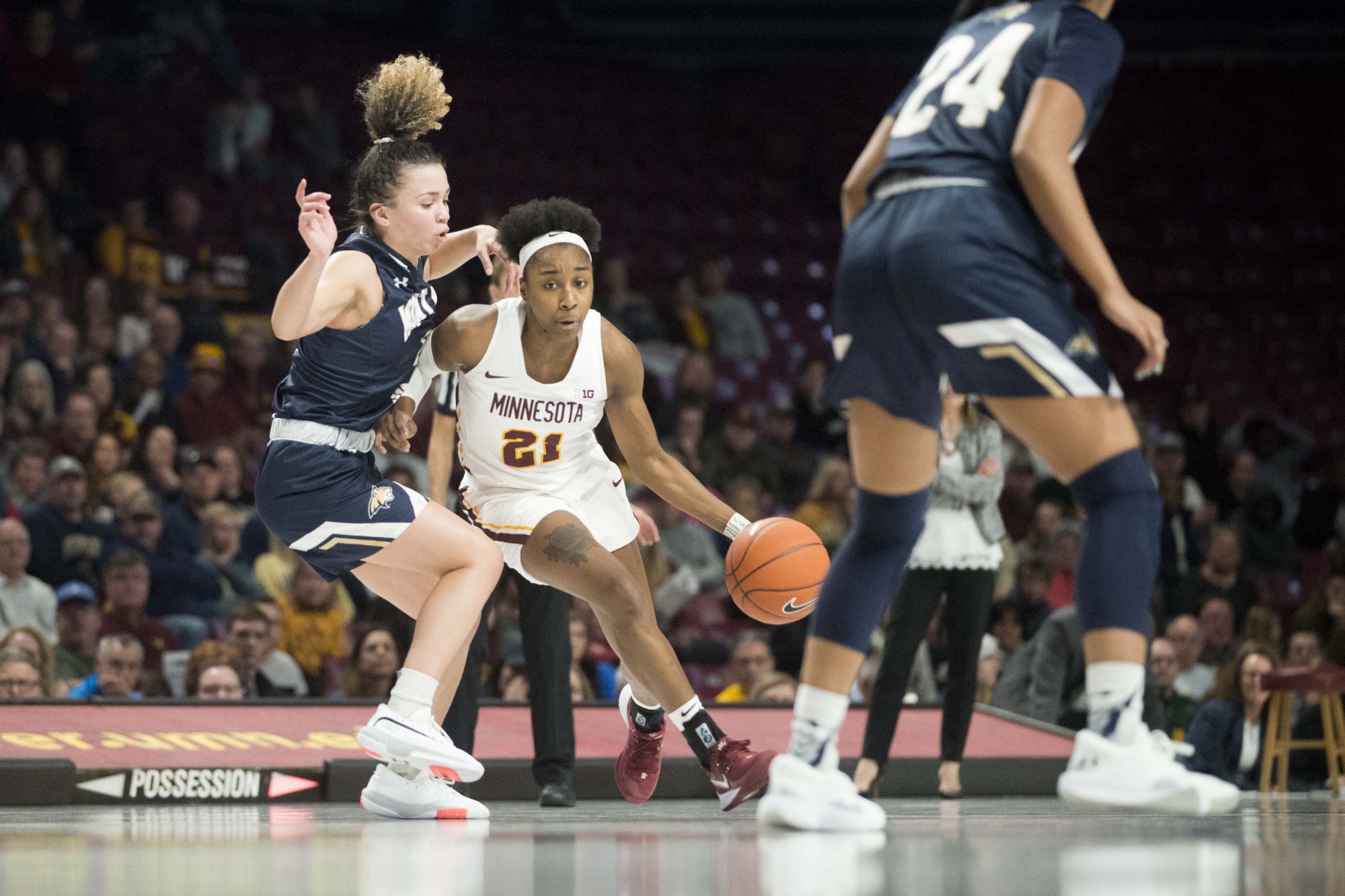 Guard Jasmine Brunson dribbles the ball through defenders in Williams Arena on Saturday, Nov. 23. The Gophers went on to defeat Montana State 71-60.

Despite coming back from a 10-point fourth quarter deficit to tie the game, the Minnesota women’s basketball team was unable to complete its comeback, losing 56-54 to Northwestern Thursday night.

For a brief moment, senior guard Jasmine Brunson was the hero for Minnesota, tying Northwestern at 54 with a three-pointer with about four seconds left in the game. However, the Wildcats came up with some last-second heroics of their own as guard Lindsey Pulliam connected on a game-winning layup.

The Gophers’ third loss will sting for a variety of reasons. Before the game, Minnesota ranked 28th in the country in fewest turnovers, averaging about 13 per game. But the Wildcats forced the Gophers into a season-high 21 turnovers in Thursday’s matchup, including nine turnovers in the first quarter.

Minnesota also struggled to stop Northwestern forward and Minnesota native Abi Scheid. Scheid came into the game averaging 11.5 points per game but was on fire in the third quarter and finished with a game-high 24 points, shooting 10-17 from the floor and 4-6 from behind the arc. She added five rebounds and three assists

Coming into Thursday’s game, Minnesota needed more offensive production from Hubbard, as she combined to shoot only 21.7 percent from the floor in the last three games. She responded, leading the Gophers with 13 points and six assists against the Wildcats.

Senior forward Taiye Bello added 12 points, nine rebounds and two steals despite only playing 10 minutes in the first half due to foul trouble.Junior forward Destiny Pitts scored 11 points and grabbed six rebounds but did not finish the game for the Gophers

At the beginning of this season, much had been said about Minnesota’s play against their Big Ten competition. In Whalen’s first season as the head coach, Minnesota began Big Ten play with a 2-7 record. The Gophers wanted to change that this season, but have not succeeded thus far as they are 1-3 in the conference this season and have lost three conference games in a row.

Minnesota will look to snap its three-game losing skid this weekend, as the Gophers are back in action Sunday, Jan. 12 at Illinois.