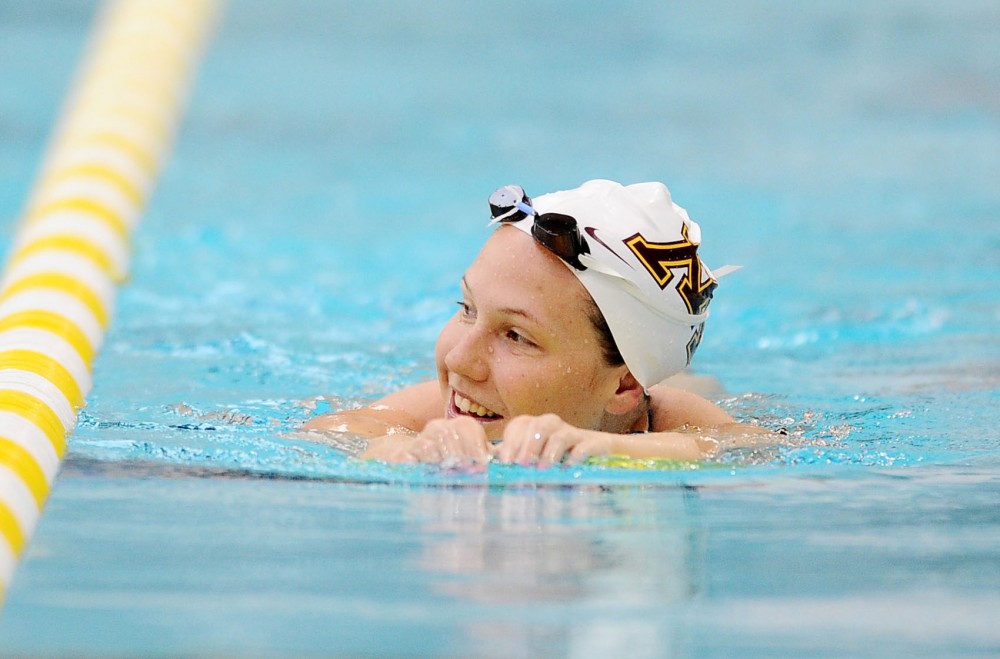 Ashley Steenvoorden practices with her former team Friday morning at the University Aquatic Center. Steenvoorden recently won silver in the 1,500-meter freestyle and bronze in the 800 freestyle at the World University Games in Russia.

Ashley Steenvoorden tried to exchange gifts with a Chinese athlete at the World University Games in Kazan, Russia, a little more than a week ago.

She said executing the trade was a challenge.

But that language barrier soon disappeared.

“It was awesome, though,” Steenvoorden said, “because we all spoke the same language in the pool.”

Steenvoorden swam away with two medals — a silver and a bronze — at the Games.

She won silver in the 1,500-meter freestyle July 13 and bronze in the 800-meter freestyle a couple of days later. This marked the third time she’s competed on the international stage but the first time she reached the podium.

“I’ve coached her for a number of years, and I’ve seen her experience different levels of success,” Gophers head coach Kelly Kremer said. “This was another step, and it was fun to see her perform her best on a big stage.

“It’s good to see the people that deserve it have moments of success like that.”

Steenvoorden said her goal was to medal at this competition, but her mindset in each race was to execute her strategy to perfection. She aimed to stay consistent the entire race and not take unnecessary risks.

Steenvoorden said she really started to gain confidence in the preliminaries and was at an extreme high in the finals.

“In the race that I won silver, I knew I was second, and in that final 100 meters I said to myself, ‘I did it. I accomplished my goal,’” she said. “I could see that I was [a] clear second, and to touch the wall was incredible.”

Steenvoorden jumped out of the water after that race and embraced her teammate, Stephanie Peacock.

Steenvoorden finished three seconds behind Peacock, who won gold, but she said the fact that Americans finished one-two in the event was special.

“I remember seeing both American flags afterwards, and that is a feeling I’ll never forget,” Steenvoorden said. “I was really humbled on the podium.”

Molly Belk, a former Gophers swimmer and close friend of Steenvoorden, was nearly 6,000 miles away from that moment on the podium. She said she’s proud of the strides Steenvoorden has made in the past five years.

Belk hosted Steenvoorden on her official Gophers visit more than five years ago. She said she always knew Steenvoorden had the potential to be great and wasn’t surprised Steenvoorden medaled in her third international stint.

“It takes some time because in some competitions, sometimes people get there and they’re wowed,” Belk said. “That might have been Ashley the first two times, but I think now she knows that other people should be wowed by her. She knows she belongs.”

Kremer said Steenvoorden’s performance showed she can compete at a high level on an international stage. He said her focus will now shift to the 2016 Olympic Trials.

Steenvoorden said the possibility of swimming in the 2016 Olympics crosses her mind a lot, and this international experience increased her motivation.

She finished 10th overall in the 400 freestyle and 14th in the 800 freestyle at the 2012 Olympic Trials. The top two finishers are guaranteed a roster spot.

“In four years, she has to go by about eight people,” Kremer said.

Kremer said he’s confident Steenvoorden can earn a spot on the 2016 Olympic roster. He said her silver and bronze medals at the World University Games are just the start.

“That performance shows her that she is improving at a fast rate, and she has about 36 months to get it,” Kremer said. “I’m really confident that we’re heading in the right direction.”