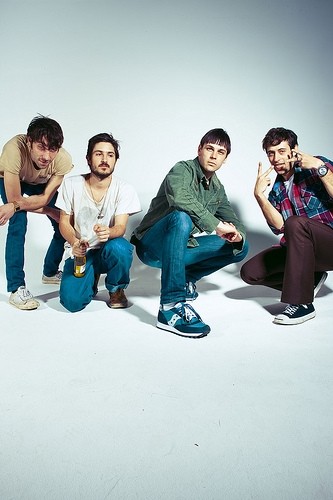 Black Lips ALBUM: âÄú200 Million ThousandâÄù LABEL: Vice Records 4 out of 5 stars Black Lips are notorious for causing a ruckus. Their recent forced escape from India is evidence enough, but their latest album, âÄú200 Million Thousand,âÄù reinforces the point. ItâÄôs a lo-fi marvel that delves into the waters of psychedelia while pushing their self-imposed flower-punk label (a commanding hybrid of early punk and surf-rock melodies) to new heights. Every song plays like some deranged cosmic blend of The Animals, if Eric Burdon couldnâÄôt sing, The Stooges , if they were really as psychedelic as their once-titular qualifier indicated, and The Beach Boys , if they were shooting smack instead of smoking grass. The lo-fi odyssey begins with âÄúTake My HeartâÄù and âÄúDrugs ,âÄù two classically Lips-y tunes with vastly dissimilar sounds. The former is a frenzied blues-punk trip that would make Iggy Pop proud. The drums throb as distorted guitars veer left and right, occasionally careening to the brink of chaos before the Lips struggle to pull them back. âÄúDrugs,âÄù on the other hand, once again proves that twanging guitars and calloused shouts spell success for indie bands. Black Lips may be overusing the technique, but as the old adage goes, âÄúIf it ainâÄôt broke, donâÄôt fix it.âÄù The bouncy âÄúStarting OverâÄù is one of the most flowery tracks. It opens with a riff thatâÄôs almost undistinguishable from something The Byrds might have done, but soon enough Cole AlexanderâÄôs crackling vocals cut in. The hook comes in an irresistible chorus chant (âÄúIâÄôm starting overâÄù) that drones over contented xylophones and tambourines. The catchiest and undoubtedly poppiest song of the bunch is the single âÄúShort Fuse .âÄù ItâÄôs easily the cleanest song on the record, with clear acoustic guitar and sharp, rapid-fire keys. Expertly composed, the song builds into an explosion of competing instruments fully realized by the bellowed lyrics, âÄúDonâÄôt lock me up/I got a short fuse.âÄù Black Lips have always made solid, passionate records and âÄú200 Million ThousandâÄù is no exception. ItâÄôs decidedly harsher than âÄúGood Bad Not Evil ,âÄù but it works; the guys are well-suited for psychedelic experimentation and their raw sound continues to evoke that glorious lost attitude that made proto-punk so powerful.