Big 1st half pushes Gophers to 2-0

Minnesota led 48-22 at halftime before its play turned sloppy. 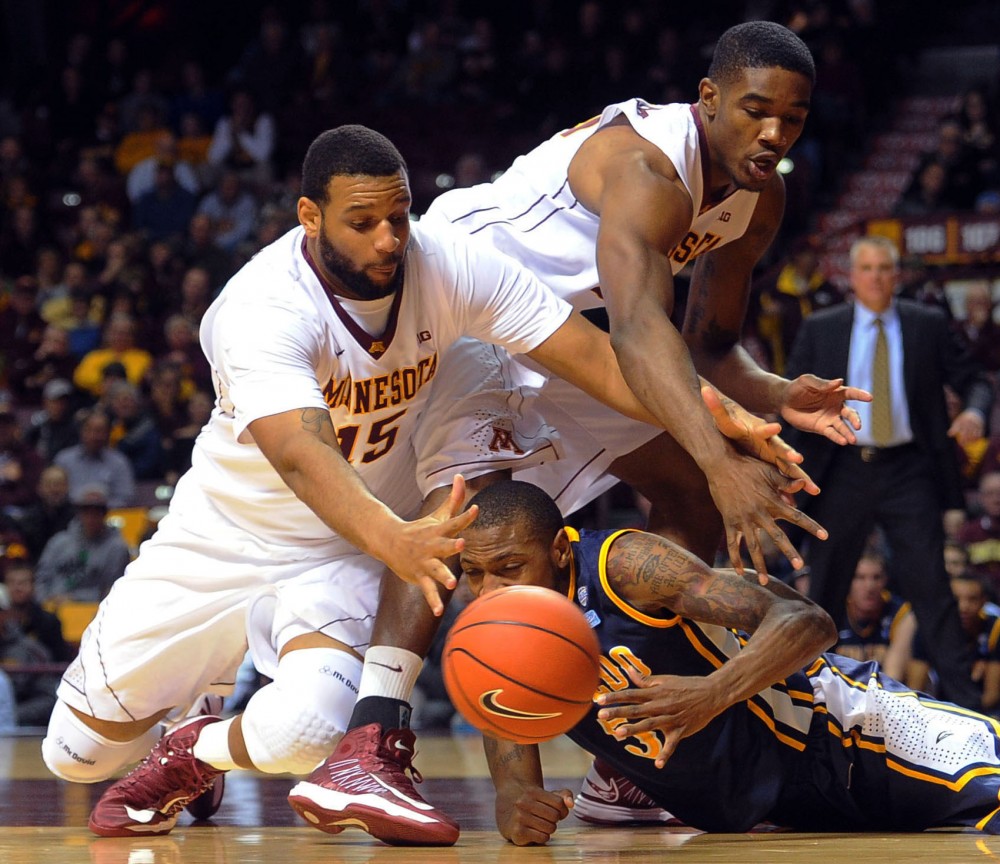 The Gophers would have liked this game to have been over at halftime.

After taking a commanding 48-22 lead in the first half, Minnesota struggled in the final 20 minutes, tying the Rockets 34-34.

“We lost a little bit of our focus in the second half,” Smith said.

Joe Coleman led Minnesota with 15 points, but he had a team-high eight turnovers. The Gophers as a team had 19 turnovers to Toledo’s 13.

“[Coleman] tries to go too fast,” Smith said. “He plays with aggression — we don’t want to change that about him, but we have to teach him to jump-stop and pass with two hands.”

Coleman was a liability on the offensive end and at times on the defense. He was slated to guard Toledo’s Rian Pearson, who scored 18 points with zero turnovers.

“I think he was just rushing it,” Rodney Williams said of Coleman. “He was just trying to make something happen too late.”

The sophomore guard still shot effectively, going five-for-eight from the field. The Gophers shot 49.1 percent as a team.

Shooting had emerged as a weakness after the Gophers’ two exhibition games and their season opener. But Austin Hollins, who shot three-for-four from beyond the arc, led the Gophers to a 35.7 percent clip from long range Monday.

“[When Hollins] is knocking down threes, that’s what gets us going,” Smith said.

Trevor Mbakwe came off the bench again for Minnesota, racking up six points on two-for-four shooting, seven rebounds and two blocks in 14 minutes.

The sixth-year senior said he’s not entirely focused on his offense just yet.

“I’m focusing on the defensive end because the offense is going to come with the more I get comfortable,” said Mbakwe, who is coming off surgery to repair a torn ACL.

The Gophers’ high-energy defense from Friday carried over into the first half of Monday’s game, but it seemed to slow in the second half.

Minnesota held Toledo to 22 percent shooting in the first half, but the Rockets shot 44 percent in the second.

“I think it’s just being impatient,” Austin Hollins said. “We’re running the floor, and sometimes we rush it.”

Hollins had a team-high 10 points in the first half on only six minutes of playing time.

After Hollins drew two quick fouls, Smith sat him for the rest of the half.

The junior guard still managed to score 13 points in 17 minutes and seems to have emerged as a go-to guy in Smith’s offense.

“If necessary, I’ll be that,” Hollins said. “But I think much of my offense comes from my defense.”

Hollins had two steals and pressured Toledo’s point guard Julius Brown — who was the Mid-American Conference Freshman of the Year last year.

Brown was held to three-for-13 shooting and had seven turnovers in 32 minutes as Hollins covered him.

“I thought that gave him a little trouble,” Smith said of Hollins’ defense on Brown.

Andre Hollins scored seven points on one-for-seven shooting and had one assist and four turnovers.