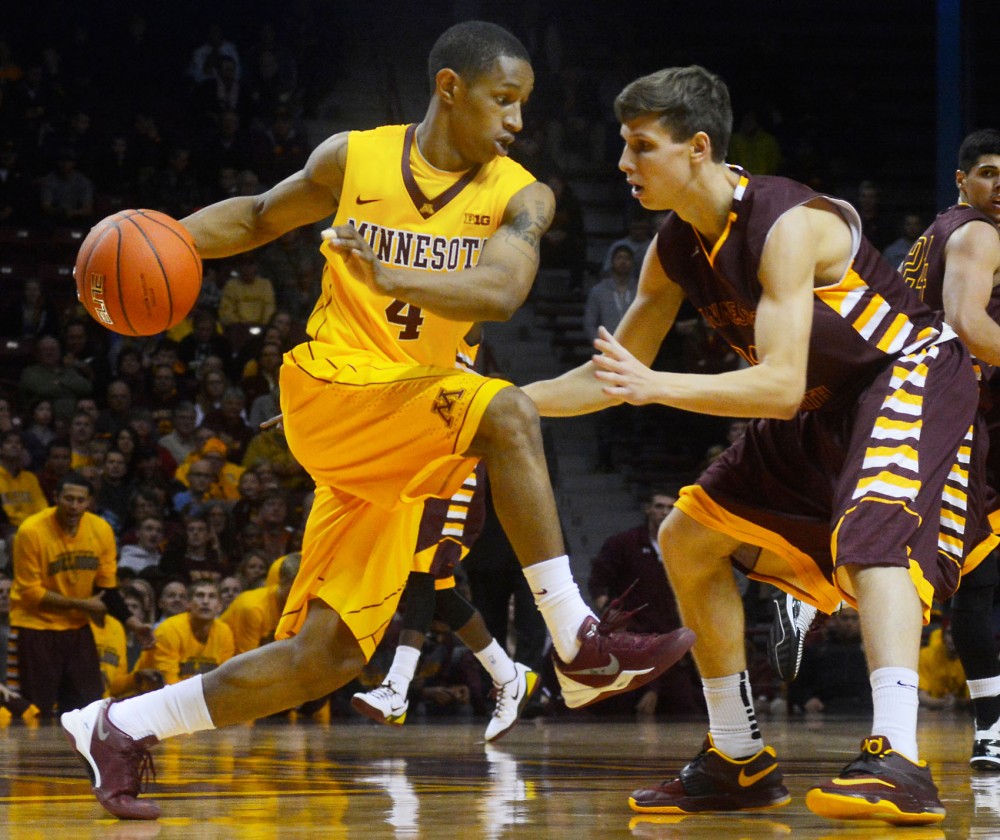 Guard Deandre Mathieu tries to escape a block on Thursday at Williams Arena. The Gophers won the preseason game against the UMD bulldogs 95-68.

Before the Gophers pulled off their full-court press with about 13 minutes remaining in a 95-68 exhibition victory against Minnesota-Duluth on Thursday night, they flashed the defensive intensity coach Richard Pitino wants them to play with.

“It’s what we want,” Pitino said. “We didn’t get as many steals as I would like, but I thought we were really aggressive. We were trapping; we were pressing.”

DeAndre Mathieu and Andre Hollins pestered opposing guards all over the floor.

Daquein McNeil clung to his man while on the defensive end and embraced his unofficial role as Minnesota’s sixth man.

Freshmen Josh Martin and Bakary Konate showed that they can be energetic big men off the bench, which made the Gophers look like a different, more fun team at times.

Moments after a strong defensive effort, Konate overcompensated by trying to block a shot, but he was called for a foul.

Prior to one of his several dunks, Martin tried to close out on a defender, but he also fouled. Playing with energy and sometimes too much physicality, Konate and Martin accounted for 10 of Minnesota’s 19 team fouls.

“I try to challenge every shot,” Konate said. “I have to learn all this stuff. It’s new to me. It’s different.”

Pitino said he started Konate and Martin in place of veterans Elliott Eliason and Joey King to see what the newcomers could do.

Martin put up eight points, seven rebounds and a block by running the floor alongside some of Minnesota’s perimeter players.

Konate only contributed four points and three rebounds, turning the ball over three times and fouling out in the process.

But after the game, he smiled by his new locker and stressed how hard he’s trying to learn the college game after growing up in Mali.

“He’s got very, very good potential as you see,” Pitino said. “I knew he’d get in foul trouble.”

Hollins scored 13 points on 5-for-12 shooting, while Mathieu added 12 points to go with a game-high eight assists.

Junior college transfer Carlos Morris rattled off 23 points with a flurry of midrange jumpers. After the game, Pitino called him “a gamer.”

But even though the Gophers compiled 95 points, Minnesota’s focus was on its defense.

And that’s where it always has been.

“Defense wins games, and that’s what [Pitino] preaches every practice,” Morris said. “‘Just rotate, be together as a defense.’”

Minnesota’s defensive intensity looked great at times. Other times, his young players were arguing with the referees after the whistle blew.

Pitino said in the future, he doesn’t want his players to be careless and foul out like they did Thursday.

But he said he liked some of the aggression on the floor, which Martin and Konate might be able to provide more consistently with time.

“I want to get [them] to the point where they are totally going all out that they need a sub,” Pitino said. “I think this team is perfectly suited for that.”