After a group for students struggling with addiction started back up this fall, many are still discussing ways to make recovery part of their campus experience. 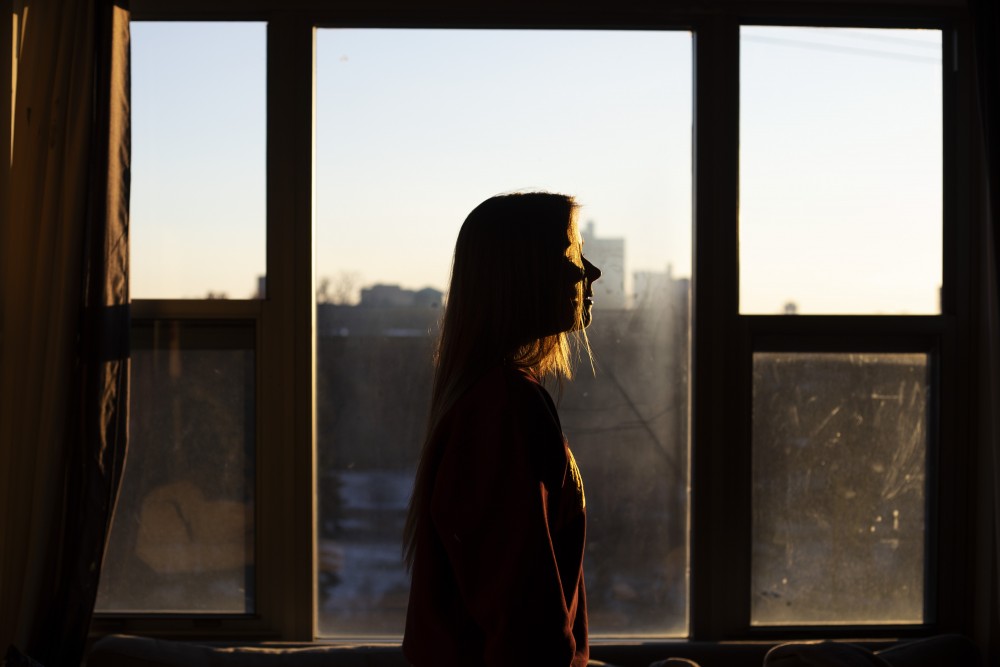 An unidentified University sophomore poses for a portrait in her apartment near campus on Tuesday, Nov. 13 in Dinkytown. She dropped out of the semester largely because of her alcohol use.

For one University of Minnesota student, trouble with alcohol started when she got a fake ID on the first day of her freshman year.

Having a fake ID gave her easy access to alcohol, and she said it was difficult to stay away. She began going out and drinking with friends every weekend. By spring semester of 2018, she was put on academic probation because of low grades.

She recently withdrew from school due to her alcohol use because the addiction felt so overpowering.

“It became a weekday thing as well. Not even partying — drinking alone is something I did and still do a lot. It’s really difficult to go a day without it. I can’t fall asleep without alcohol in my system,” said the student, who requested to remain anonymous because her family doesn’t know the full extent of her addiction. She plans to continue living on campus while working and re-enroll next fall. For some, staying in school has more to do with fighting addiction than academic success. For many students facing substance abuse at the University, there are few places to turn on campus for resources.

Until late October, the only advertised support group for students struggling with addiction on campus was Students Off Booze Enjoying Recovery (SOBER). The group re-branded to Recovery On Campus last month in order to assume a new identity and strengthen University resources.

Sydney Hobart, one of two student coordinators for ROC and a graduate student studying public health, said the group is now more sustainable and inclusive to all forms of recovery. Before rebranding, the group was described as a social gathering of students to meet and go on alcohol-free outings, but was defunct for almost a year due to the lack of student coordinator, she said.

“ROC is meant to be a space where students can connect with one another and share in their experiences in recovery and what that means for them, but also [allows them] to recognize that being in recovery doesn’t cut you off from all social engagement on campus,” Hobart said.

According to Sydney, ROC is not meant to replace more intensive forms of treatment, such Alcoholics Anonymous or inpatient programs.

Excessive use of substances isn’t uncommon on campus. According to the University’s 2015 College Student Health Survey Report, more than a quarter of University students reported high-risk drinking, or consuming five or more drinks in one sitting, within a 12-month timespan. Six percent reported having used at least one illicit drug such as amphetamines, hallucinogens or cocaine.

However, the University of Minnesota was ranked second lowest for recovery resources among Big Ten schools, according to a 2018 survey by AccessU: Addiction, a University journalism course that reported on addiction at the University. The survey based its findings on housing options, support and peer groups, university resources and membership in the Association of Recovery in Higher Education.

The anonymous student, who has not sought help, said she was unaware of any resources on campus for students like her. Like many others, she does not have a car on campus and relies on nearby options.

“I’ve considered AA, but I’m bad at admitting when I need help. I’m not really sure what’s available on campus. … I just want to graduate,” she said.

The University’s lack of resources has been a problem for students in the past. Jason Showers, a former University student, never touched drugs or alcohol before he began drinking socially at college. He transferred to the University in fall of 2013 because of the social scene, and he began experimenting with harder drugs like Xanax and Oxycodone. He said after hallucinating due to lack of alcohol in the summer of 2014, he recognized his substance use wasn’t normal.

“I realized this was messed up, but I didn’t want to or know how to stop,” he said. “When I first got drunk, it felt like something I had been missing out on my whole life.” After his roommates kicked him out of his apartment in fall of 2014, Jason went to Boynton Health to find treatment. He was told there was a six week wait for a chemical dependency assessment appointment, and began drinking again before his parents forced him to enroll in an inpatient program. He took a medical withdrawal from school that fall.

Dave Golden, director of Public Health and Communications at Boynton, said while it has faced long wait times in the past, Boynton no longer has a wait list for any mental health services. Boynton currently has two Licensed Alcohol and Drug Counselors on staff who assess student’s alcohol or drug use, and a third is going through the training process.

Shower’s mother Julie Showers, who is also Associate Vice President of Equity and Diversity, said when she first tried to find programs for her son in 2014, the University had almost no on-campus options or recommendations for other resources.

She searched extensively throughout the Twin Cities for treatment and eventually found a program in Plymouth, about 15 miles away from campus, she said. Jason Showers was able to attend because his parents lived nearby and could afford the program, but he said many students don’t have those luxuries.

Jason withdrew from classes that fall and enrolled in the University again in spring of 2015. He moved to a sober house in St. Paul after he was unable to find housing for students in recovery on campus.

While the University offers substance-free housing in Middlebrook Hall, the dorm is currently only open to freshmen, and no other substance-free, sober or recovery student housing exists on campus. Julie Showers said the off-campus housing options were also limited and many were not student-friendly.

Golden said the University had previously attempted to implement a Living Learning Community in a residence hall for students in recovery, but were unable to find enough students interested. There are currently no plans for other recovery housing.

“If we have some interested folks, it could be a really good thing to do. We’ll see what happens this year [with ROC],” Golden said. “It’s tough because many of them are older, non-freshmen.”

After his personal experience with addiction, Jason Showers intended to pursue an Addiction Studies Undergraduate Certificate at the University to become a drug and alcohol counselor before the program was shut down in 2016.

The bachelor’s certification, which had been available for decades, was shut down due to financial aid problems and lack of undergraduate interest, said Debra Wamsley, director of the University’s master programs in alcohol and drug counseling. The University currently offers two Master’s programs for students wanting to obtain a license for alcohol and drug counseling.

Jason Showers, who has been in recovery for four years, is now studying at Metropolitan State University in Minneapolis to complete his certification.

“I wish I felt like I mattered [at the University]. I don’t think it’s a problem of there not being people struggling, it’s that people don’t know if there’s [resources] or aren’t comfortable stepping forward. There’s too much stigma,” Jason said. “We need to look out for each other and check in.”