Gophers battle to a stalemate

Poor weather led to one goal apiece despite multiple chances. 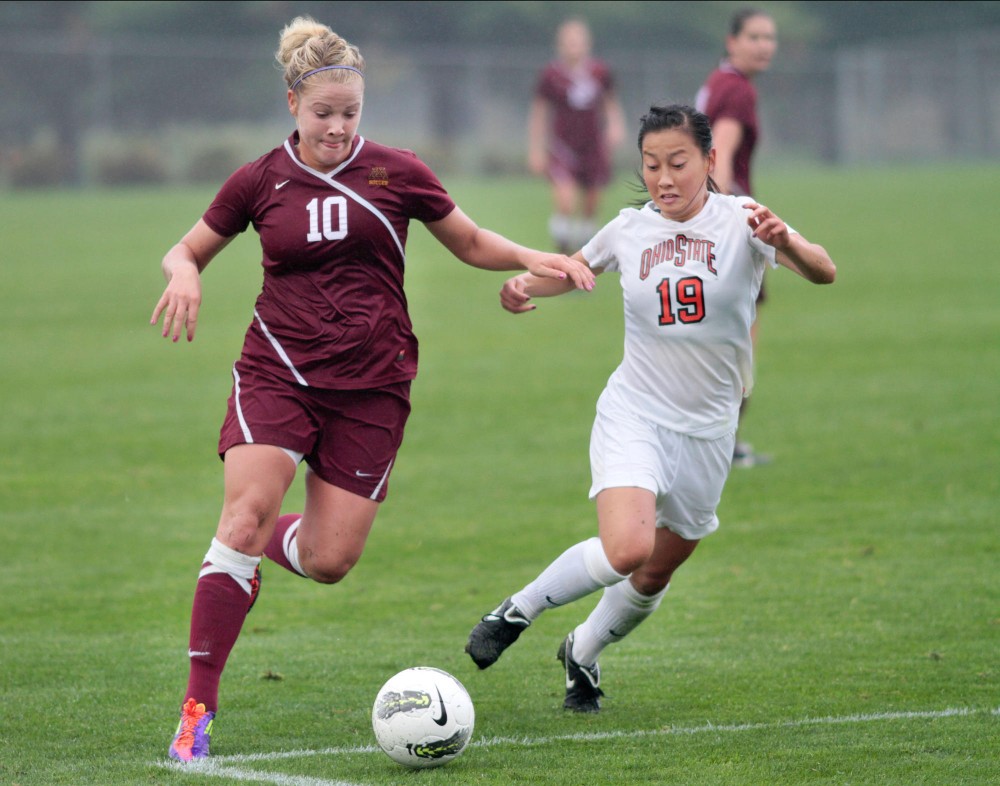 Shari Eckstrom drives the ball toward the goal in the second half of the Big Ten conference play Sunday afternoon at Elizabeth Lyle Robbie Stadium in St Paul. Eckstrom had the only goal in a 1-1, double-overtime draw.

On a day where the dreary weather seemed to resemble the way the young season has begun for the GophersâÄô soccer team, Minnesota opened conference play with a tie against Ohio State.

The two teams played on a wet field at Elizabeth Lyle Robbie Stadium in a consistent mist that resulted in lots of slipping and sliding in a game that ended in a 1-1.

âÄúYou obviously always want to win but I think itâÄôs a step in the right direction,âÄù said head coach Mikki Denney Wright. âÄúThere [were] so many positives today, we were much better in overtime than we had been previously, there was a lot of growth out there today.âÄù

Shari Eckstrom broke the ice for the Gophers when she scored the first goal of the contest. She launched a frozen-rope from 25 yards out past Buckeyes goalie Katie Baumgardner.

âÄúAll week weâÄôve been working on shots from distance and our attack,âÄù Eckstrom said. âÄúI just got a good first touch and I hit it and it went in.âÄù

Minnesota (3-5-1 overall, 0-0-1 Big Ten)  had the only shots of the first half, testing Baumgardner twice. Besides EckstromâÄôs goal, the other shot was by freshman Taylor Uhl from distance that was deflected wide by the keeper.

The goal came after 20 minutes of the two teams trying to figure each other out. After EckstromâÄôs goal there was a flurry of chances for both teams.

âÄúNormally when a goal is scored it gets the team riled up,âÄù Eckstrom said. âÄúI think if we could play with that kind of energy and passion all the time it would help us score more goals and be more dangerous.âÄù

The quiet offensive numbers for Ohio State came as a surprise for a team that featured last yearâÄôs Big Ten Offensive Player of the Year, Paige Maxwell.

MinnesotaâÄôs starting defenders Marissa Price, Lauren Bauer and MacKenzie Misel were able to keep the BuckeyesâÄô offensive weapons silent throughout the first half despite the sloppy conditions.

âÄúOn a wet field itâÄôs super hard [to defend], we experienced this at Illinois State and we all had to change our cleats,âÄù Price said. âÄúSo this week we actually went cleat shopping and got brand new studs and brand new cleats if we had the blade kind of cleats.âÄù

Ohio State broke through early in the second half in the 52nd minute when Danica Wu lit up a shot from 28 yards out âÄî similar to EckstromâÄôs in the first âÄî that kissed in off the crossbar and into the goal.

The goal awoke the BuckeyesâÄô attack as they tested GophersâÄô goalie Cat Parkhill five times throughout the second half. Parkhill collected four saves in the half.

Neither team was able to break the tie through the rest of regulation or the two, 10-minute overtime sessions, despite the soggy field and the fact that the referee let some physicality go un-penalized, which led to numerous chances.

âÄúI thought our fight was amazing all through overtime,âÄù Price said. âÄúI felt we tired them out the whole time and we brought our best.âÄù

One bright spot on the day was the play of the GophersâÄô freshmen, who had been called out by Denney Wright.

The most notable freshman Sunday was Sheridan Reiners, who played significant minutes late in the game and had multiple quality crossing attempts.

âÄúI think you could see growth [in the freshmen] for sure,âÄù Denney Wright said. âÄúI thought we took a huge step this week.âÄù