The Gophers won Saturday in front of an announced crowd of 13,573 at the Kohl Center. 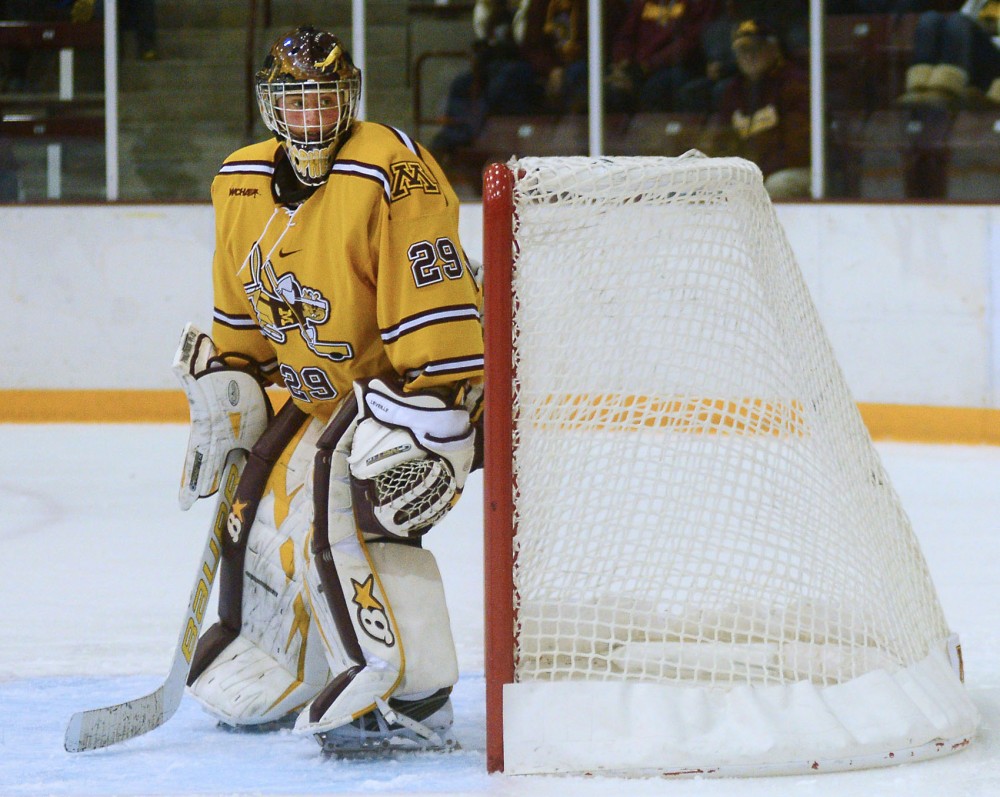 Gophers goaltender Amanda Leveille stands in the crease. Leveille took over in net for Minnesota this season.

And it did so in dramatic fashion as No. 1 Minnesota swept No. 2 Wisconsin on the road.

On Friday, the Gophers spoiled Wisconsin’s Senior Night in a closely contested 3-2 battle. A night later, they wore down Wisconsin 4-0 in front of an announced crowd of 13,573 — the largest crowd in NCAA women’s hockey history.

The Gophers needed just three points — equivalent to one win — to clinch the WCHA regular-season title for the eighth time.

They accomplished that Friday.

“Our goal at the beginning of the season was to win the WCHA, and there is no better place, I think, than to win it on Wisconsin’s ice,” sophomore goaltender Amanda Leveille said Friday.

Minnesota head coach Brad Frost said before the series that this weekend’s games could be a race to two or three goals. The Gophers got to those marks first in both games.

On Friday, the Badgers struck first with a one-man advantage following the conclusion of a 5-on-3.

“We started slow,” Frost said Friday. “It [was] a pretty quick pace out there, but I thought we made some adjustments into the second and third period and got our feet under us a little more.”

Minnesota responded early in the second period on a goal from junior forward Rachael Bona, which appeared to hit off a Badgers player before going past senior goaltender Alex Rigsby.

Cameranesi said she’d been practicing a similar move with her linemates in warm-ups and it had been “absolutely awful.”

“When it happened, I was kind of in shock,” she said.

Frost said his team showed great resilience bouncing back in the game Friday.

“[The] WCHA title isn’t easy to win, and the kids really paid the price here … and deserve it,” Frost said.

The Gophers and Badgers moved from LaBahn Arena to a larger sheet of ice at the Kohl Center on Saturday night for the Fill the Bowl game.

Minnesota participated in the first Fill the Bowl game in 2011 and allowed a goal on the first shift.

That wasn’t the case Saturday.

“As I told our players, no crowd has ever won a hockey game, so let’s keep them out of it,” Frost said Saturday.

Leveille fended off Wisconsin all night. She made 24 saves and kept her team in the game before the offense found the back of the net.

“Even in North Dakota, she said that she loves hearing the fans chirp her,” Terry said. “She just gets super pumped up.

“It was the same thing here, and right away she had the student section behind her heckling her. … That just puts some fight in her.”

Terry scored the game’s first goal midway through the first period and celebrated against the boards in front of the Wisconsin fans.

“That’s not something I would usually do,” she said. “In fact, it wasn’t even a premeditated celebration. I was just so excited [that] it happened.”

That goal gave the Gophers a lead they wouldn’t relinquish, and it helped keep the crowd quiet.

“We knew it was important to try and get on them fast to … make sure that [the crowd] stayed a little bit quieter so that that wasn’t a factor,” Terry said.

Minnesota sophomore forward Hannah Brandt added another goal near the end of the second period.

The Gophers scored twice more in the third period against a Wisconsin team that looked worn-down.