The group arranged a demonstration and a counter-concert. 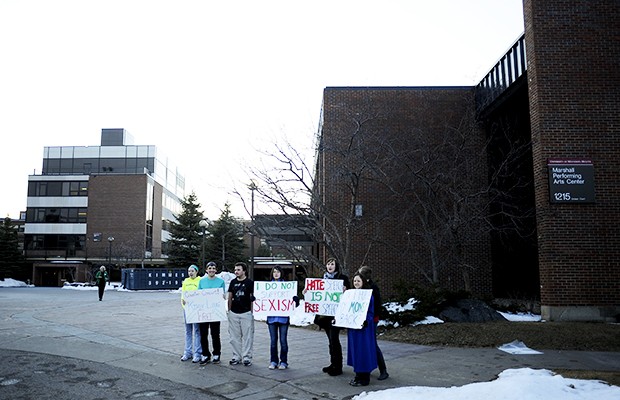 University of Minnesota Duluth students protest outside the Soulja Boy concert at Romano Gym on Friday. The students said they were upset because their student service fees were paying for acts that have controversial lyrics.

As the University of Minnesota DuluthâÄôs Romano GymnasiumâÄôs first-ever sellout crowd of 2,600 people filed in Friday night, many couldnâÄôt ignore the row of protesters shouting and wielding signs. This group of 10 UMD students, mostly female, stood outside to protest UMDâÄôs spring semester music act, Chicago rapper Soulja Boy, claiming the concert broke University of Minnesota policy. The group said they were perturbed that the University would use student funds to hire a performer with lyrics they felt were misogynistic and degrading to women. Ariel Schnur, the junior womenâÄôs studies major that organized the event, criticized the Kirby Program Board, the collaboration of 11 UMD students who vote on and select programs paid for with student service fee money. âÄúSlap dat hoe man, pimp slap her ass man. You get yo respect, dog,âÄù Schnur recited from a Soulja Boy song. âÄúWhat does it say about the University when they cut money from the womenâÄôs studies program and pay an artist to say degrading things like that?âÄù Nate Haugen , concert chair on the board, said Soulja Boy was booked in late February based on availability, price and popularity with the student body. Soulja BoyâÄôs song âÄúKiss Me Thru The PhoneâÄù was number three on the Billboard Hot 100 music charts at the time of the concert. Haugen said in the future the board may consider making shows 18-plus to make sure children donâÄôt hear offensive content. âÄúThis will always be in the back of our minds while we are choosing [acts] from now on,âÄù Haugen said. Corbin Smyth, director of the Kirby Student Center, said he sympathized with the groupâÄôs cause and respected their desire to stir up discourse on the issue. Schnur also alleged that the University violated multiple sections of the University of Minnesota Board of Regents Code of Conduct by allowing discriminatory and malicious content to be broadcasted on campus. UMD Vice-Chancellor Randy Hyman reviewed the code, and said that there was no violation because the policy in question applies only to students. âÄúSoulja Boy is an invited guest,âÄù Hyman said. âÄúWe canâÄôt tell him what he can and cannot say.âÄù Hyman said that he supported the protest. âÄúIâÄôm impressed that these students are willing to stand up for what they believe,âÄù he said. âÄúI think they definitely encouraged discourse on campus.âÄù The group arranged a free âÄúcounter-concertâÄù in a University music lounge concurrent to Soulja Boy. The counter-concert featured four bands from rap and rock genres. Seventy people attended, according to the signature list attendees were asked to sign. The turnout for the protest was lower than expected; Schnur originally predicted 40 people would be protesting outside the concert. Despite the low turnout, she said she felt the concert was a triumph. âÄúPeople definitely sensed our presence,âÄù Shnur said. âÄúIâÄôm very pleased with the amount of people that âÄ¦ caused the student body to think about these issues.âÄù