Down Lynch and Coffey, shorthanded Gophers fall to Indiana

Center Reggie Lynch missed the game after being suspended for a sexual misconduct violation. 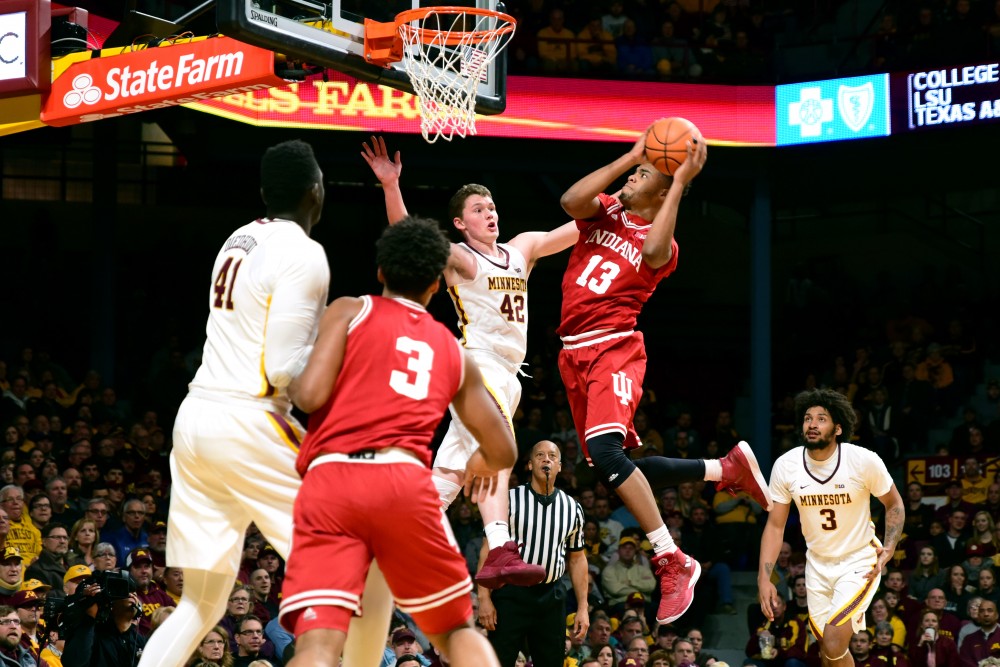 The Gophers felt the pain of two absent starters on Saturday.

Minnesota center Reggie Lynch missed the game due to a suspension stemming from a University sexual misconduct violation, according to multiple reports, while guard Amir Coffey was ruled out against Indiana with a shoulder injury.

The Gophers and the Hoosiers exchanged leads the whole game, but the tide eventually turned in favor of the Hoosiers after stingy defense by Indiana and missed free throws by Minnesota.

“Credit to Indiana, I thought they made big plays at the end, certainly, we did not,” said head coach Richard Pitino.

With just under a minute in the game, the Gophers trailed by two points. Minnesota guard Dupree McBrayer was fouled under the basket and hit one of two free throws to cut the deficit to one. Minnesota’s Jordan Murphy drew a foul shortly after. He shot one and missed with 25 seconds left.

Hoosiers’ guard Robert Johnson sank one of two free throws with eight seconds to play, which put the game out of reach at 75-71. Gophers guard Nate Mason raced down the court and shot a three, with hopes of cutting the lead to one, but he missed and the Gophers suffered the conference loss.

“I think more than anything, certainly adversity has hit right now and we have got to get these guys to continue to believe in each other,” Pitino said. “We’re going to watch the film and the people that played are going to say ‘there’s a lot of things that we could have controlled, that we could have gotten this win.'”

Murphy tallied his 17th double-double of the season when he rebounded the free throw that Johnson missed with eight seconds to play. In doing so, he tied Tim Duncan’s NCAA record of consecutive appearances with a double-double, which was set in the 1996-97 season.

McBrayer, Murphy and Mason — the three original starters playing in the game — combined for 58 points against the Hoosiers. Mason had a team-high 22 points.

Center Bakary Konaté and forward Michael Hurt filled in for Lynch and Coffey. The duo combined for two points, and five of the team’s 14 turnovers. Konaté and Hurt each took one shot in the game, often electing to pass it to other players on the floor.

“Obviously, I don’t think [Konaté and I] played very well,” Hurt said. “We lost a lot of scoring without [Lynch] and [Coffey], so I think me and [Konaté] and guys in the bench just need to step up and produce.”

It is unknown how long Coffey or Lynch will be out, as Coffey recovers from an injury he received in the Illinois game and Lynch appeals the suspension he was given on Friday, according to reports.

When asked if this was the toughest stretch of his career — given losses, injuries and a suspension — Pitino brought up the past.

“I won eight games two years ago,” Pitino said. “I guess you’re in this game long enough, you see a lot. We’ll get these guys positive, we’ll get them working and get them better.”