U researchers at the reserve look at how humans are impacting ecosystems. 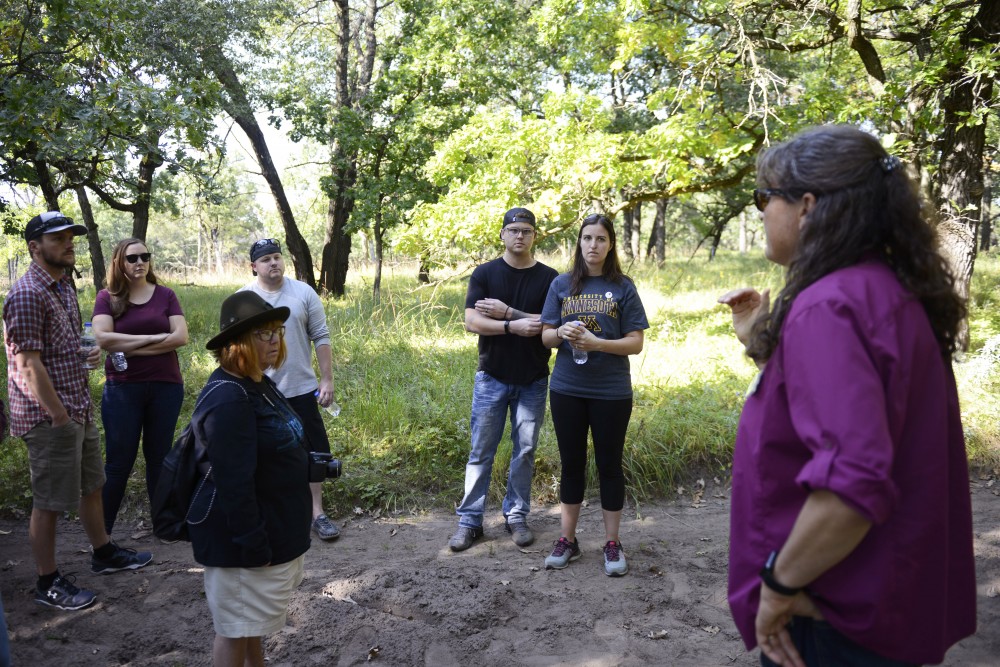 Jeannine Cavender-Bares discusses the effects of burning different land plots at the Cedar Creek Ecosystem Science Reserve in East Bethel on Saturday, Sept. 9 2018. The center recently turned 75 years old and teaches scientists the current understanding of biodiversity and its importance.

A new exhibit at Coffman Union is using art to show the research being done at the University of Minnesota’s Cedar Creek Ecosystem Science Reserve.

The reserve is a University biological research site located about 30 miles north of the Twin Cities campuses. University students and researchers conduct work on the 9-square mile plot to analyze how human activities are changing ecosystems.

The exhibit, which opened earlier this month, is an attempt to show the University community the research at the reserve — and introduce people to the reserve itself.

Caitlin Potter, education and outreach coordinator for Cedar Creek, said many people at the University may not know about the reserve or the work being done there.

“This is a chance to communicate the work to non-scientists,” she said.

A hub for biodiversity in the state, lots of ecological research goes on at the reserve. Part of this includes research that involves restoring a bison population into the area to study how the animals can help with ecosystem preservation.

The art exhibit highlights the reserve’s artist in residence program, which brings artists into the reserve to provide a new way to communicate ongoing research at Cedar Creek.

Frank Meuschke, a local painter and photographer, spent his time at the reserve capturing photos of how science and the landscape interact.

He said the underlying theme of his work at the reserve is to get people to see what is right in front of them. To Meuschke, people notice events such as whales washing up on shore or cities flooding but do not notice small ecological changes — things being studied at the reserve.

“All these things that would let us know what negative consequences are coming, you can’t see until it is too late,” he said.

He hopes his photographs of Cedar Creek show people things that they need to see but may not be able to.

“It’s important for people in Minnesota to know Cedar Creek,” he said. “A lot of firsts happened at this place. It set the stage for a lot of ecological science.”

Along with the artists in residence program, the gallery is also highlighting the reserve’s program that allows the public to participate in research.

The work, often referred to as “citizen science,” relieves some burden from researchers and allows people to engage in the research.

An app was released this month that makes it easier for people to engage with and identify the photos. Designed like a dating app, the program displays a photo on a phone and has participants swipe left if there is no animal in the photo and swipe right if there is.

Potter said the public has helped identify unknowns, such as interactions between bats and deer, through the photo program.

“These citizens are doing important work,” she said.